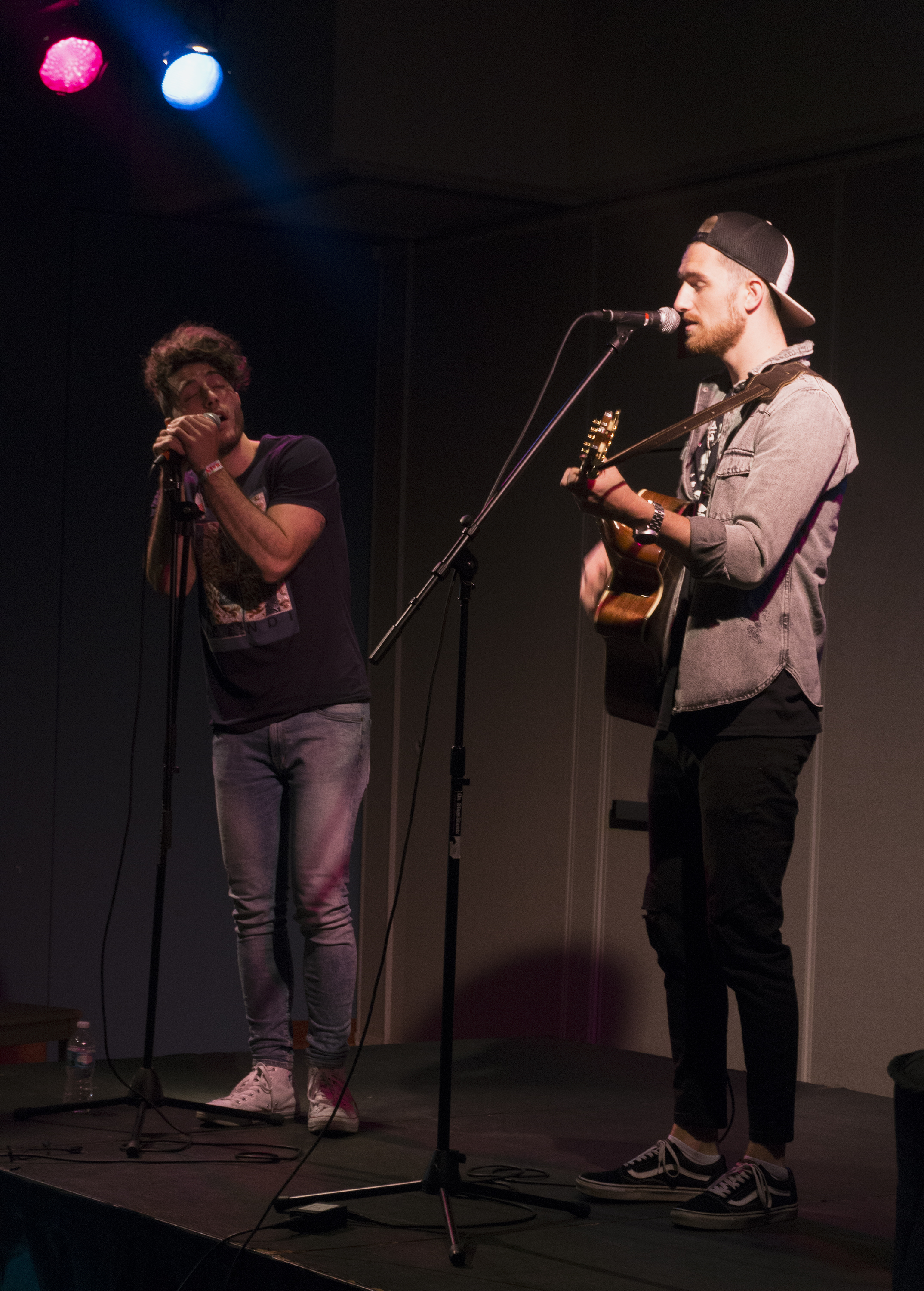 Last week I was sitting in Warch, playing a card game with my friends, waiting for Saturday Night Late to begin, when two guys stopped by our game. “Hey, you guys should come to this thing in the other room in like 10 minutes!” It was Justin and Slavo from Fly By Midnight, the very act we were waiting to see. The guys were really friendly and genuine, and clearly psyched to start their show. I finished my game, then followed them into Mead Witter.

When we got there, there was already a substantial crowd waiting, and people were starting to bring even more chairs in. It was clear there were a few fans in the audience, people familiar with their work, but also lots of people just around to enjoy their Saturday night.

At the start of their set, Slavo mentioned how weird it was that they could see everyone in the room. “But awkward’s okay, right?” he asked. “We’re in college, we’re allowed to be weird, right?” They kept up this affable banter throughout the performance.

The duo played a few originals, and lots of covers—usually slowed-down and chilled-out versions of pop songs by artists like Niall Horan, Calvin Harris and Maroon 5. They also played a mash-up of Drake songs and ended the night with The Beatles’ “Hey Jude.” Among their original songs were “Finding Jane,” an old favorite about meeting a girl on the train, and “Malibu,” one they wrote on a trip to China about high school nostalgia.

At one point in the night, a fan shouted out from the corner, “Do you take requests?” After apologetically waffling for a moment about when they used to try to take requests, and how it usually ended up being a song they didn’t know, Justin asked her, “Just out of curiosity, what song were you thinking?” “Your song, ‘Brooklyn,’” the fan shouted back. Large smiles broke out on the boys’ faces, as they explained to the crowd that this was an old single of theirs that came out about three years ago. After sizing it up for a moment and looking at each other, they jumped right into it with such comfort that you couldn’t tell they hadn’t played it in years.

At the end of the night, they wrapped up their set with some audience participation in a song called “Vinyl,” splitting the crowd into “Side A” and “Side B” and making it a singing competition. When they were finished, they made their way through the crowd to introduce themselves and meet the audience. I was impressed with how genuine they seemed, and their dedication to making their whole audience feel involved and included.