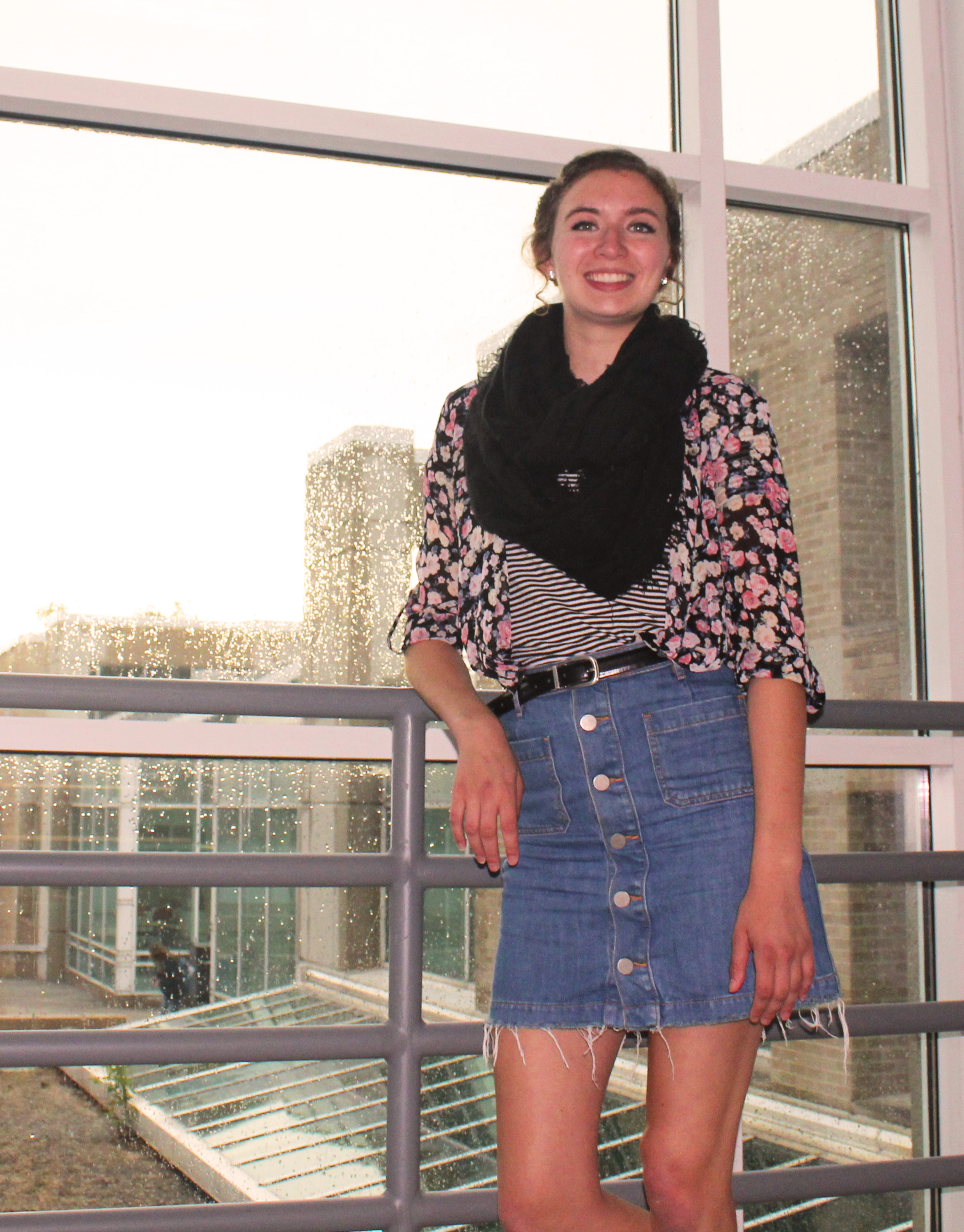 Freshman Riley Seib, in true Lawrentian spirit, is as multi-interested as they come with hopes of combining her interests in music, visual art and theater into her own unique major. Her sense of style is similarly interdisciplinary, with pieces of her wardrobe ranging from long-owned staple overalls to handmade, artful rings. It seems that as Seib continues to expand in her accumulation of interests, passions and hobbies, her wardrobe is only going to expand along with her.

Seib is drawn to color, patterns and compelling and unique silhouettes. When asked to pin down what all that means in a description of her own style, Seib stated, “That is a big question. I feel it’s true to say that for everyone your style is always evolving, and that’s definitely true for me. At this point in time I think I would say my style is eclectic vintage. In general, I’m drawn to anything that is different. I like mixing colors and prints. I don’t really subscribe to one aesthetic or anything like that. I’ll wear whatever I think is eye catching.”

Seib is all about finding clothes she’ll love and keep in her closet for the long term. Whether that means altering clothes or making jewelry, Seib is up to the task. For an example of the latter, Seib pointed to the ring she was wearing and explained that it was made from an old ring band she had that she super-glued to a collection of vintage buttons her mother had collected. For an example of the former, she pointed out her favorite overalls.

She explained, “My overalls are the one thing that I love layering with the most. I can put them with everything. They were very long on me when I first bought them and then they started getting too short as I grew, so I gave them the old chop with the scissors so that I could keep them. I love to hastily DIY things.”

Seib explained that growing up, clothing was just clothing. Her mom helped her match most of her clothes, a skill she didn’t boast to possess herself. As Seib got older, she realized clothing wasn’t just something to match things with, but a whole new avenue of expression she had never tapped into.

For Seib, this avenue was a long-awaited destination. Seib explained this as she stated, “I feel like getting into my own style helped me express who I’ve always known myself to be. So, it didn’t define who I am. It is so cool to see people walk out in what they’re wearing in their most confident self, it’s sometimes unexpected and I love seeing that. I love to do that too.”

Not only was discovering the power of style an impactful moment for Seib, but as she continues to grow in her passion for visual arts, so does her passion for style. Seib stated, “For me I have always loved to doodle and draw, and I’ve also been involved in art. More recently I’ve gotten interested in mixed media art. I think that’s where my more eclectic style is coming from. Art has definitely helped me channel what I want to wear more effectively in order to express who I am.”

Seib’s interest in art is not complete without being coupled with her interest in theater. While art inspires what Seib is drawn to, theater gives her a judgement-free audience to share those inspirations.

Seib stated, “I started doing theater in late elementary school. I was very energetic and all-over-the-place theater ended up helping me. Once I got into it I knew that I found my people. I guess theater gave me a place where people are accepting of everyone, so you can stand out and experiment a lot and you can do that really openly.”

It’s hard for Seib to not stand out, not only because of her colorful style, but also because her height. As a tall woman myself, I have an everlasting appreciation for all things lanky. Seib shared in this appreciation as she stated, “When you’re tall, especially as a woman, you’re used to standing out. I think you go through a phase where you don’t really know how to handle that, but at some point, I just figured it out. Shopping for clothes when you’re tall is a whole other story, though. People take for granted the feeling of denim against their ankles.”

Even though there were times where Seib felt like she stood out while she was growing up, she didn’t really worry about how she compared to others too often. Even now, you won’t find Seib present on much social media, and even before the dawn of Instagram, Seib cites the fact that she never read magazines as she was growing up as a reason why she was never that involved in the comparison game.

Seib stated, “My mom would never let me read fashion magazines because that definitely has an effect on people. Seeing all these images from a young age shapes how you see yourself. As I’ve grown older I have become more open to just how far those sorts of issues can go and the effects they hold.”

Whether Seib is in choir rehearsal or Freshmen Studies, she is already excited about the explosion of style she sees around campus, and that excitement inspires her own style. Seib stated, “I went to a very small high school. It felt very stereotypically Midwestern. Hunting and everything Wisconsin. So especially in high school I always felt like a fish out of water. Of course, I enjoyed high school and had great friends, but people would always look at me and say, ‘Oh Riley, what are you wearing?’ It was always in that weird sort of tone that just said they really didn’t get it. I was fine with that, I guess. But when I’m here, people get it. I really appreciate that.”

If you’re interested in being a part of this project, please feel more than free to contact me at katherine.a.mueller@lawrence.edu to set up a time for an interview