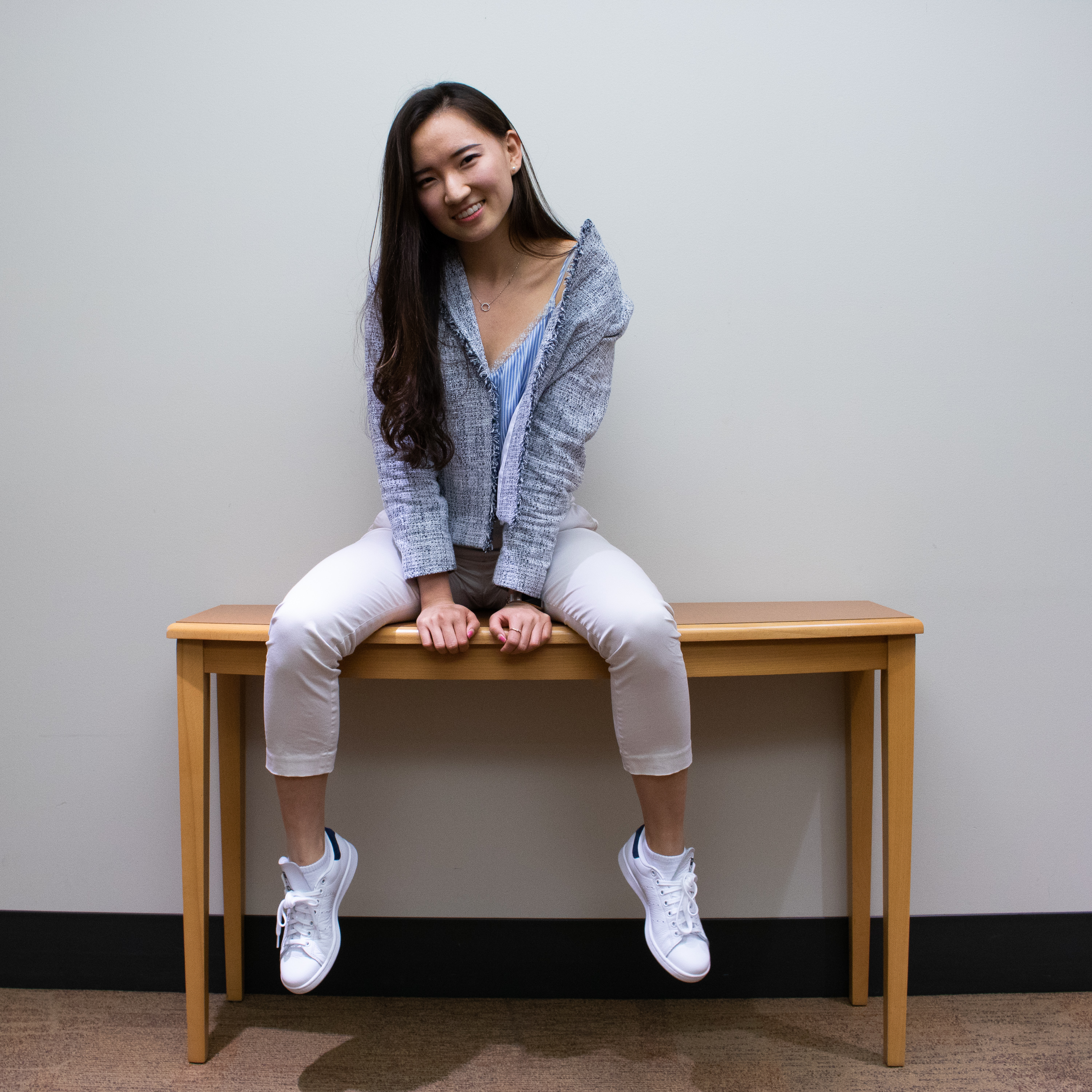 When senior Ethics and Public Policy Major Emma Liu finds what she wants, she sets her sights on achieving it. This drive has taken her into new countries and even occasionally new wardrobes. Her dorm is scattered with mementos from her travels and friends; she even has a collapsible closet in the corner of her dorm bursting with beautiful coats and dresses.

From her mohair white coat she bought in China to her classic trench that she always wears while traveling, Liu has an eye for the timeless, and her collection of versatile pieces reflects her driven and sharp personality.

If there was one word to describe Liu’s style it would be “elegant.” But Liu doesn’t think it’s always been this way. Liu stated, “I feel like my style has changed a lot as I’ve grown as a person. I grew up in mainland China and came to the U.S. for first time freshman year. I had a little bit of culture shock. Before coming to the U.S. I dressed in more of the “Chinese way,” so I went through a period of trying to fit in and observing what others were wearing to try to put my own element into it. But somewhere in there I think was trying too hard. Now I’ve studied abroad and done internships and I’m coming back with this personal growth. Right now I’m a senior looking for jobs and trying to be more organized, and my style is influenced by that.”

“Do you know the brand Free People?” Liu asked while she explained how she saw the differences between style in China and style in the U.S. She went on and stated, “That Free People style is more bohemian and relaxed, that’s more of the U.S. style. People also wear a lot of sweaters and leggings, you can go to the gym right after in those clothes. And then there’s also party wear, and young people don’t really party in China. If I would wear a crop top or a cami that would seem way too sexy in China. But I’ve been influenced by this, and when I come home my mom will want me to cover my shoulders and be more conservative. But I didn’t bring those more conservative clothes back home, I wouldn’t feel good dressing that way because it’s not me anymore. I feel like in that way my style always reflects my personality and my mental state.”

As Liu took out various special pieces from her closet, she showed off a black peplum dress with beaded pearls (à la Coco Chanel) that she almost wore for her birthday a few days ago, but decided it might have been a little too fancy for the occasion. She also eagerly pulled out a dress suit whose top was a tailored white button-up and bottom was a black pencil skirt.

Liu passionately described the dress as “definitely more work attire, it’s pretty professional. I was pretty crazy about suits. I love when they’re fitted to the body and fashionable, so I’m glad I found this one. I had seen this online but I was debating whether to buy it or not, so it was really fortunate because I was going to London to shop and went into this store and asked for my size — online my size had sold out, and they magically had it.”

While Liu has always felt confident in more elegant attire, her time studying abroad at Oxford University only helped to springboard that confidence more. She stated, “I went to Oxford last year. It was intense but very fun. I had to write two essays every week, like 2000 word essays. It was all very dependent on time management. I was pretty active in a society there called Oxford Union where they bring in speakers from all over the world that are top in their field and they hold events for these speakers to ask questions or to meet them in person. My goal for these events was to dress appropriately. Overall, I think people in the U.K. and at Oxford definitely dress more formal, which is fun!”

From Liu’s time studying abroad at Oxford, to an internship she did with GlobeMed in Rwanda, Liu believes that what she’s gained from these opportunities is setting her in the right direction.

Liu stated, “It’s the whole thing that I’ve got going for me, and I don’t want it to go away. I think right now the main focus is my studies and finding a job and being a part of the pre-law society here — I’m currently the president. So with that I’m thinking, ‘pre-law society’ means ‘professional society!’ I need to look a little presentable. Really I just wear what I want to wear. Sometimes I wear heels to class. Maybe it’s a little bit too much. But ya know, I just think, ‘Why not?’”

Liu likes how professionalism makes her feel, even in the classroom. For Liu, professional clothing reminds her of her inner confidence. Liu explained this as she stated, “I’m taking this class called ‘In Pursuit of Innovation.’ It’s a speaking intensive class where you get to pitch a project. We’ve had a couple of days where we get to pitch our projects to the class, and for those I dress business casual. I was trying to simulate the actual environment, but it also gives me power. And I think I did well in it too!”

While Liu’s elegant dresses and coats might set her apart from a typical outfit for a Tuesday, Liu is always dressing for herself. Liu stated, “I don’t intentionally want to stand out. It’s not like I just want to be different. Because at first I was a little worried that I wouldn’t be able to fit in. But then I just feel like, ‘I don’t care!’ I don’t care. It’s not like I think other people are dressing inferior to me at all, it just feels right for me. I just want to wear something that makes me confident.”