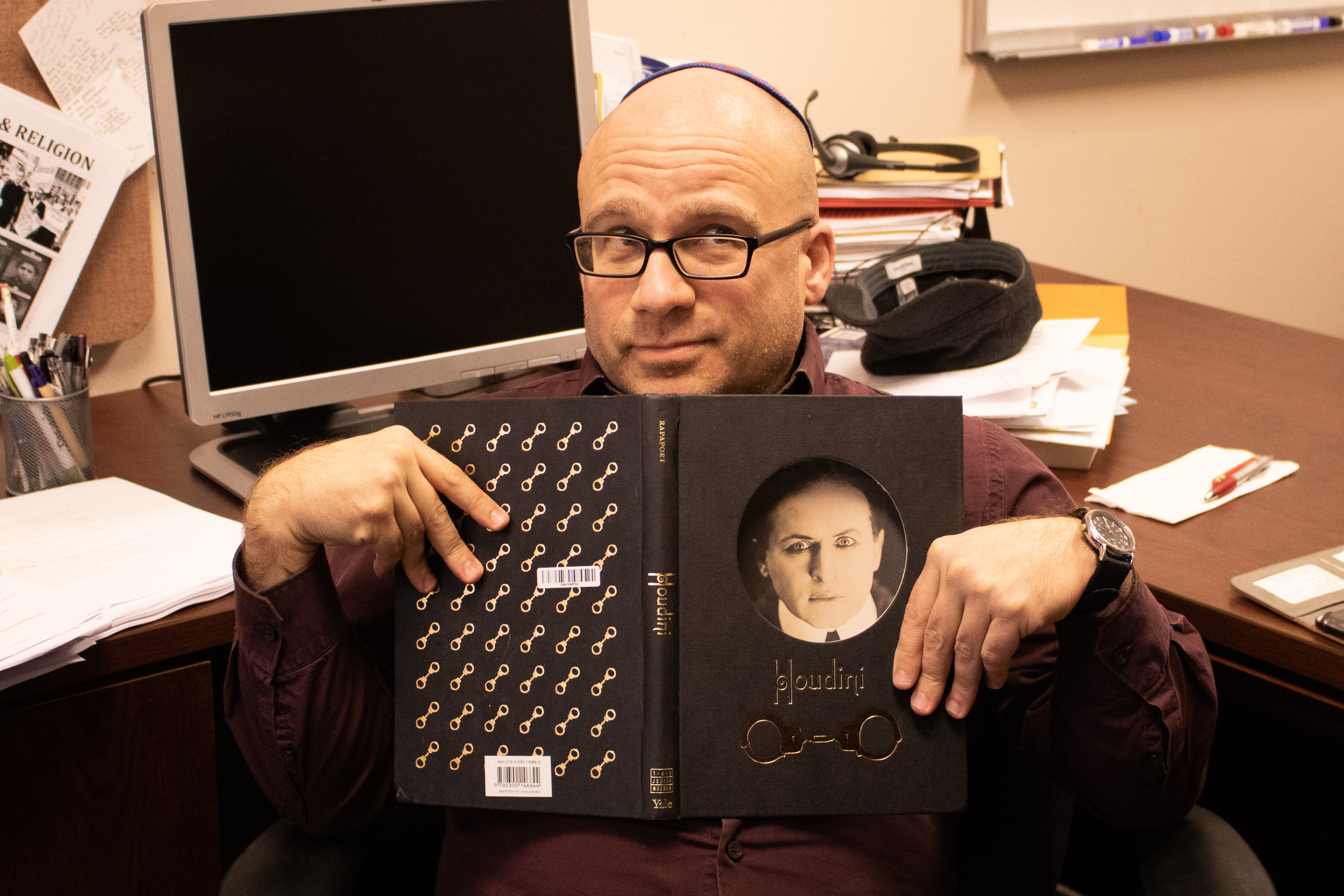 Elliot Ratzman in his office.

Lately I have been thinking about the diversity at Lawrence and how we celebrate each other as a community. I especially would like to highlight the Jewish spiritual lives on campus. This week’s Hidden Figure is a man of many interests and is dedicated to teaching and his students.

Elliot Ratzman is a visiting Postdoctoral fellow in Jewish Studies and is entering a new position as the Jewish Life Mentor from office of Spiritual Life. His main responsibility in the Office of Spiritual Life is to be a resource for Jewish students on campus and make sure if there are issues that emerge around Jewish matters of antisemitism to appoint people to help as well as offer support.

His primary role is teaching courses in the Religious Studies department. Some of his classes include Antisemitism, Israeli Conflict, Race and Religion, and Intro to the Bible. He decided to work at Lawrence when he applied to be a Postdoctoral fellow. His main mission was to get some writing done.

His big writing project is a book on critical race theory and Jewish philosophy. Last year he had a head start in doing some chapters and putting together a book proposal. His book will address various questions of race and antisemitism in Israel, the United States and Europe. He wants to explore the ethics and politics of race in the Jewish world.

Prior to teaching at Lawrence, Ratzman had been teaching full time for ten years in Philadelphia. His highest degree is a doctorate in religion from Princeton with a master’s in theology from Harvard. He loves working at Lawrence because of the excellent faculty, staff and student body.

Appleton is the coldest place he’s ever been, but he believes the stark seasons build character. According to Ratzman, the Lawrence Difference is the dedication of faculty and administration to self-reflection and improvement.

One thing students might not know is that they must call him Ratzman. “Professor Ratzman is too formal and Elliot is too informal,” Ratzman explained.

Students should take his courses to laugh a lot and enjoy themselves, as there is never a dull moment in the material. Ratzman covers a variety of topics including issues of conflict and questions of race, racism and religion.

He wants to focus on the success stories of things getting better for people who have long struggled with oppression. His classes are hopeful. If anything, students have the opportunity to improve their writing skills. The class also watches a number of films that are usually unforgettable and former students still talk about.

Ratzman is the oldest Jewish competitive break-dancer, and still going. He has a cat named Philo, which is named after the philosopher, not phyllo dough. He is an avid comic book collector and an avid reader. He has 10,000 books left in Philly, but 5 boxes of books on his office book shelf. He is a fan of Prince. He has done stand-up comedy and story slams.

He loves female singers and listens to folk from the 90’s and 2000’s. In his free time he does yoga and cross-fit. He was almost trained as a yoga instructor. These days he enjoys binge watching superhero shows and catching up on writing. The most important thing on his desk is his datebook because he likes to be organized. Ratzman has former students he’s still in touch with. Students are his responsibility and he keeps in touch with them, whether it’s to recommend what book to read next or to give life advice.

When asked what inspires him the most, Ratzman took a long, reflective pause before answering, “I’ve been very inspired to see how active students and young people have been politically, in a smarter way than when I was in college.”

Another thing students may not know is that Ratzman is a trained community organizer around issues of Middle East peace, global health issues and women’s labor rights, and he is proud of the stand young people are making in politics.

Wholesome, spiritual and activist are words that best describe Ratzman. Stop by his office to say hello, check out his book collection, or geek out over Prince.