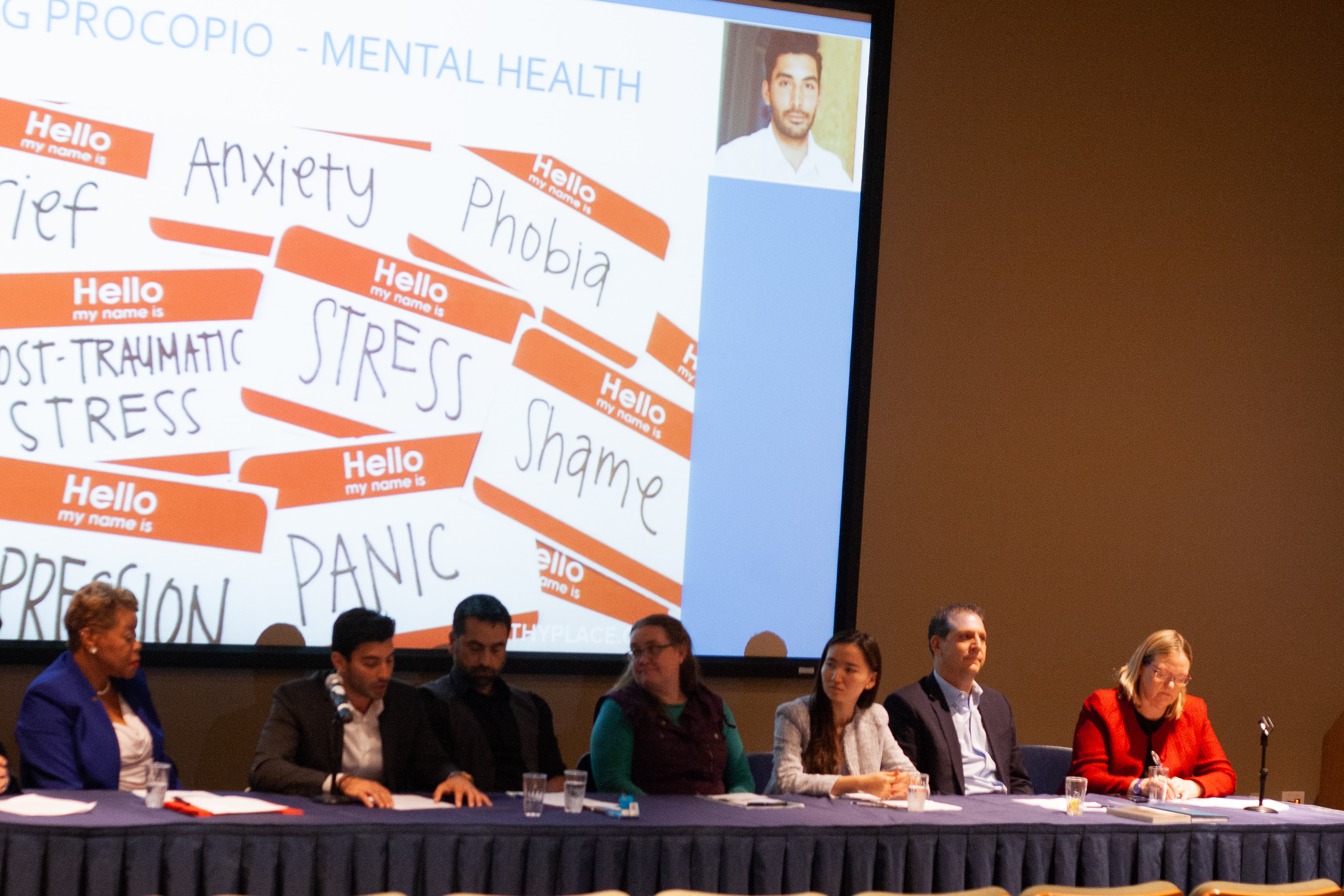 The panelists at the lecture.

On October 2, a group of seven panelists gathered to present this year’s first Povolny Lecture in International Studies. This lecture was part of an ongoing series meant to honor Mojmir Povolny, Emeritus Professor of Government at Lawrence who passed in 2012. Moderated by Claudena Skran, the panel consisted of Lawrence staff, faculty and students who were given five minutes to answer one question: “What is the biggest issue facing the world today?” Drawing from a wide breadth of expertise, the panelists demonstrated the deep intersectionality of these issues and encouraged Lawrentians to consider how they can make a difference.

What may come as a surprise is that nuclear war was not mentioned. When pressed on this, the panel said that the issues they selected are direct or indirect precursors to nuclear war, and are thus more urgent. The most commonly brought up issue was climate change.

“Climate change is an issue for the same reasons it is deprioritized,” Professor Deanna Donohoue said. “Its damages are gradual and global, so it isn’t something we see in our own backyards or that will make headlines.” She suggested one explanation for the sidelining of this issue is how digitized the world has become, saying, “Issues that don’t move at a fast pace are lost in the cacophony of immediate information.”

Professor David Gerard was especially pessimistic, calling climate change a “foregone conclusion” that is going to happen. He said, “It is an almost perfectly intractable problem, and something our political system cannot deal with.”

Professor Jake Frederick suggested that a way to raise awareness about the urgency of climate change is to turn our attention toward its more immediate destructive effects, namely the fires it contributes to. “Wildfires hit closer to home than images of sad polar bears on melting ice,” he said. He mentioned that the U.S. spent 2.1 billion dollars last year putting out fires, with the nation’s fire season having become 78 days longer on average.

In addition to climate change, this problem is exacerbated by an increase in wildland-urban interface, where more property is being destroyed due to its proximity to burning wilderness. Frederick’s proposed solution is to employ “transregional federal policy to regulate where we build houses” to minimize overlap between developed and undeveloped land.

An additional problem of climate change is its effect on displaced people; a force behind this is that it creates opportunities for tensions to escalate to armed conflict. This leads us to Vice President of Diversity and Inclusion Kimberly Barrett’s main talking point: human migration.

“Our solutions to human migration must be ethical while protecting the sovereignty of nations,” she said. She asserted that the U.S. has lost some of its moral authority on the world stage with its failure to provide for asylum seekers or reunify families. Part of her explanation for this is that we have given in to fear.

Contrary to fearful attitudes, the Cato Institute (which Barrett considers conservative) published research concluding that a U.S. citizen has a 1 in 3.64 billion chance of being a victim of terror at the hands of refugees. Barrett argues that comprehensive immigration reform is the definite solution. She said, “While I support things like DACA, they are only temporary fixes, and we need to hold politicians accountable for something permanent.”

Senior Greg Procopio named mental health as the world’s biggest issue. Mental illness, which Procopio said “doesn’t discriminate against race, income, or ethnicity,” affects 1 in 5 students. The majority of those affected will not receive help. Procopio criticized the lack of allocation of resources toward mental health, saying, “While mental health is on the UN’s Global Development Agenda, it is merely a bullet point on a list. Solutions need to be rooted locally.”

Such solutions are especially important for the developing world: “Many here are shamed and discriminated against, such as in Ghana where the mentally ill are chained inside their homes,” Procopio said.

Poor treatment of the mentally ill in developing countries is one way the entire lecture was relevant to senior Emma Liu’s issue, Africa. Forty-one percent of Sub-Saharan Africans live in extreme poverty, among other harrowing statistics. Speaking from her own experiences visiting Rwanda, Liu said that problems facing locals include extremely high prices for food, nomadic lifestyles due to homelessness, and social biases leading to unemployment.

While the continent may seem like a summation of other global issues mentioned, Liu held an optimistic tone. She noted that foreign investment in Africa is increasing, especially from China, and the continents economies have been growing 4% a year on average. “I believe African development is important not only to right historical wrongs but also because of these countries’ potential as emerging markets,” Liu said.

Speaking on the issue of communication, Professor Matthew Arau related his experience in music with a culture of “social media echo chambers” and “shouting at each other rather than listening.” A musical mindset helps us out of these problems, he argued, as it forces us to think collaboratively and be persistent with finding solutions.

A notable example is El Sistema, a music education program founded in Venezuela to give youth an alternative to crime and gangs. Arau joked, “If we are ever to obtain world peace, every world leader needs to play in a musical ensemble together.“ While music itself may not be a direct solution to global issues, the values it fosters will inevitably play a role in creating solutions.

The issue of communication was just as relevant to Professor Gerard, who pointed to the death of democracy as a looming global problem. “Solving problems by a deliberative process is on the decline, and young Westerners do not view democracy as favorably as past generations,” Gerard said. He argued that the primary problem is not presidential overreach (“I could say something about anybody’s favorite president that wouldn’t sit well with them”) but polarization that breaks down societal values.

“Immigration and income inequality are directly linked to increased polarization, and this means a decline in free speech and public discourse,” he said. The way out of this may not be smooth, with Gerard asserting that dysfunctional polarization may only topple if one party’s voters jump ship or there is a major crisis such as a terrorist attack or economic downturn.

Many of us may be asking ourselves how we should digest such a daunting palette of information.  As Arau said, “Think globally, act locally,” and the greatest influence we can have is centered in our campus. Voter registration is one point the panel was keen on making, for example.

Dr. Barrett has said she wishes to present more opportunities for alternate or conservative viewpoints on campus where people can mindfully listen to each other. Frederick sees this as welcome due to disbelief at the 2016 election results indicating that Lawrence is out of touch with the outside world. Since there is no scolding people into agreement, one must treat people as though they are rational and be harsh on one’s own side. This is something within anybody’s power; as Barrett said, “Don’t worry about changing the world, but make every decision a conscious decision.”