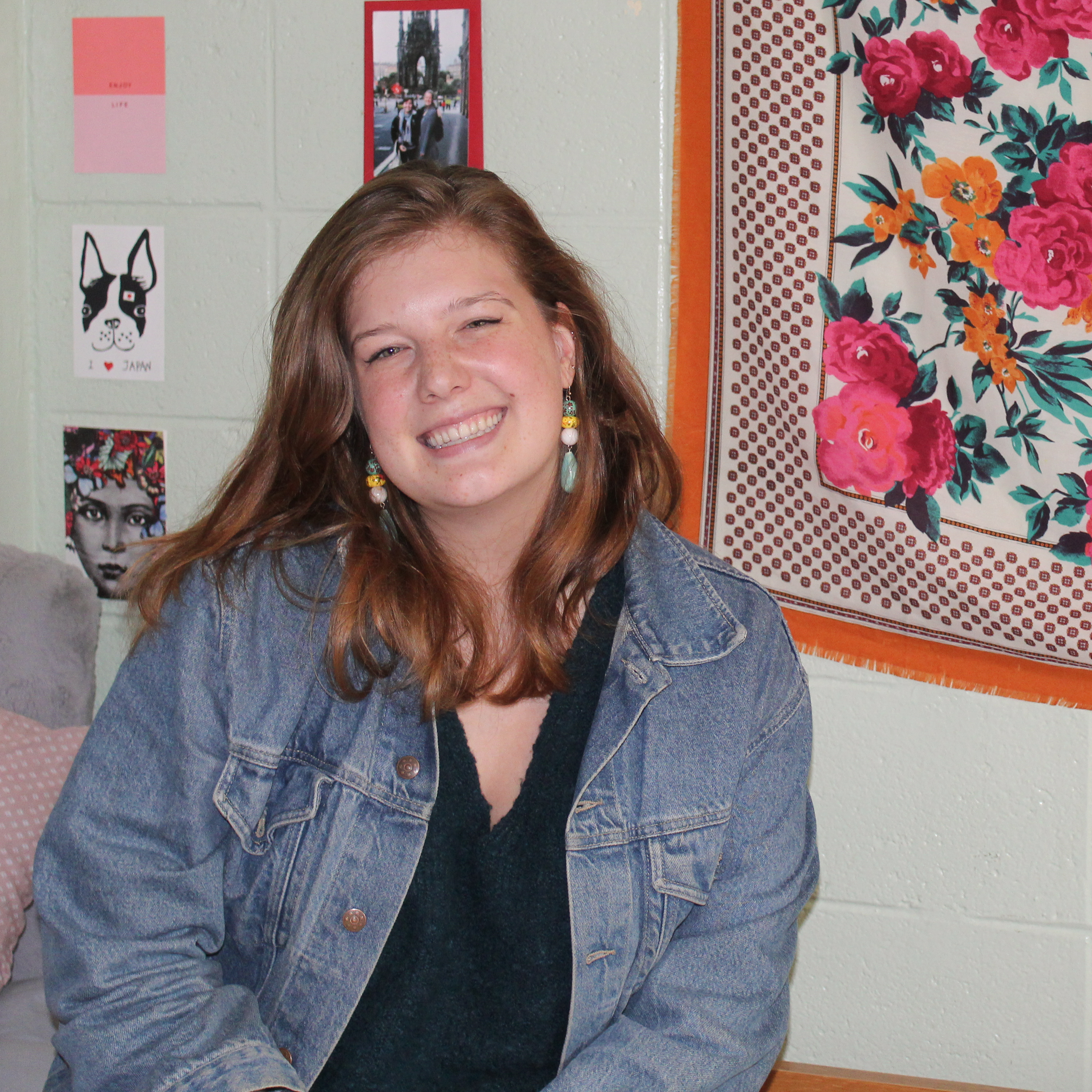 I have wildly cared about clothing my whole life. From spending hours of my childhood afternoons putting together outfits to ceaselessly chopping up skirts and dresses to make my own creations, I spent a lot of my childhood thinking about clothing. My identity has largely and unknowingly been represented through what I choose to wear. Through this column, I hope to showcase my fellow Lawrentians’ understanding of clothing, dissecting the nuts and bolts of what personal style is, and seeking out stories about how identity informs style and how the reverse also functions. Style is about so much more than just clothes. It is one of the most visual ways we pronounce our own identities.

Junior Vocal Performance major Emily Richter has a simple yet thought-out style that allows her to feel as “comfy as wearing PJs all day” while still looking put-together and bold. Richter values feeling at home in her body, her clothing and her surroundings. She is always on the quest for a comfy sweater, a tall pair of jeans or an excellent cup of coffee. Her flexible approach to style lets Richter feel more present and in tune with her friends as well as her music throughout the day.

Richter’s style is based on “high quality basics.” She loves sweaters, jeans and big scarves. Richter spoke to her simplistic style and stated, “At first I thought it was funny when we set up this interview because I feel like I dress pretty casual. I mostly wear jeans and sweaters. But I told that to my friend Anna Mosoriak and she brought up how last year one of my friends Zoe Markel actually dressed up as me for Halloween with a big scarf and jacket. Anna said if someone can dress up with your style then clearly something about it is specific.”

Richter values a formula to her outfits — she doesn’t really want to fuss. Richter stated, “I get dressed in ten minutes before I leave. When I had an 8:30 class I would wake up at 8:20. I like having things that are reliable that I can mix up. If I’m feeling adventurous then it’s a big deal. But I like that I can spend no time and feel pretty consistently put together. I just put on earrings or sweaters every day and it’s basically the same outfit as the day before, but no one’s probably going to even know so it’s like a whole new outfit.”

When it comes to what basics she’s looking for, Richter knows what she’s after. She stated, “I feel like I look for color. I get so drawn to specific colors that I have to find new ones. For a while all I was buying was olive green. And I had to stop that after a while because olive green on olive green can be a little much. I try to look for colors that complement each other. I also look for certain silhouettes that I know will work for me partly because I’m tall. The way things fit matters and the older I get the more I realize that.”

While Richter is well-acquainted with Wisconsin winters, she’s also lived abroad with her family because of her father’s work. As she’s traveled, Richter has definitely picked up on the ways style differs country-to-country. Richter stated, “I think the U.S. is more casual and dressed down. The way I dress in the U.S. is different than how I dress when I travel. In London overall my style was more dressed up. And in Japan I’m always wearing this flowy skirt because it’s so hot, but modesty is valued and so is looking put-together. I think in America we value not looking too put-together. I think that’s a big difference. It’s a different approach to fashion!”

One of Richter’s favorite ways to switch up her style is her extensive collection of large colorful earrings. She has earrings with whales embroidered onto them that she got in Shimokitazawa, a “Boho neighborhood twenty minutes outside Tokyo,” Richter stated. Richter also has a pair of bright cobalt blue stone earrings that contrast against her more muted wardrobe. Apparently, Richter has been wearing this specific type of accessory for a long time. She stated, “I loved wearing big colorful earrings ever since middle school. One reason I got into big jewelry was that my sister has liked making jewelry since she was nine. Most of these earrings she made for me.”

Aside from jewelry, Richter also likes playing with makeup to switch up her looks. Richter stated, “I’ve always liked makeup and I thought it was fun, but I’ve never worn a lot of makeup. I just got this highlighter from Maybelline that’s called ‘strobing highlighter.’ It’s so nice. I look at videos of singers and their cheekbones and I want to make my cheekbones look like singer cheekbones, so I bought highlighter.”

Makeup is more about the ritual for Richter than the end result. She stated, “For me, makeup makes me feel more put-together. But sometimes my makeup routine is just washing my face and putting jojoba oil on and in my mind that’s like makeup because I feel more put-together. I’ve taken time to appreciate myself. So sometimes I don’t wear any makeup but it feels like I am.”

As a studying vocalist, Richter notices a few style trends within her singer community. She stated, “There is definitely a such thing as the ‘singer scarf.’ I have always been a scarf person since my dad would bring me back pashminas from Afghanistan, but my scarves have only gotten bigger. As singers we present ourselves a lot. We’re performing in lessons and studio so we’re prepared to present ourselves and we’re often dressing more conscious of that. I think singers have to be aware of who we are and what we’re presenting. You have to cultivate yourself. Your body is your instrument, which is cheesy, but it’s true.”

Richter thinks this process of cultivation as a singer can be fulfilling, but it can also lead to stress. She stated, “For me this cultivation can be really cool because the whole goal of singing is to speak honestly to something and that takes a lot of self-awareness. I think the way you put yourself together as you get dressed is a step in that process. It’s one of the first things we do in the day and it’s going to affect the day. As a singer you’re always aware of your body and what you’re thinking and doing. Sometimes that need to be self-aware is a pitfall because we correct ourselves while we’re singing. You can become so aware of presentation that you can’t just speak. You have to remove some of that artifice to be authentic. It’s a balance.”

If anything is certain, Richter values how she sees herself and how she presents that to others. That self-awareness plays a major role in how Richter approaches her studies, from the classroom to an opera rehearsal, on a regular basis. Her clothing is integral to that self-awareness. It allows her to feel comfortable and it allows her to feel strong in herself. And for Richter, that strength might just be a big beautiful scarf and a pair of earrings too.