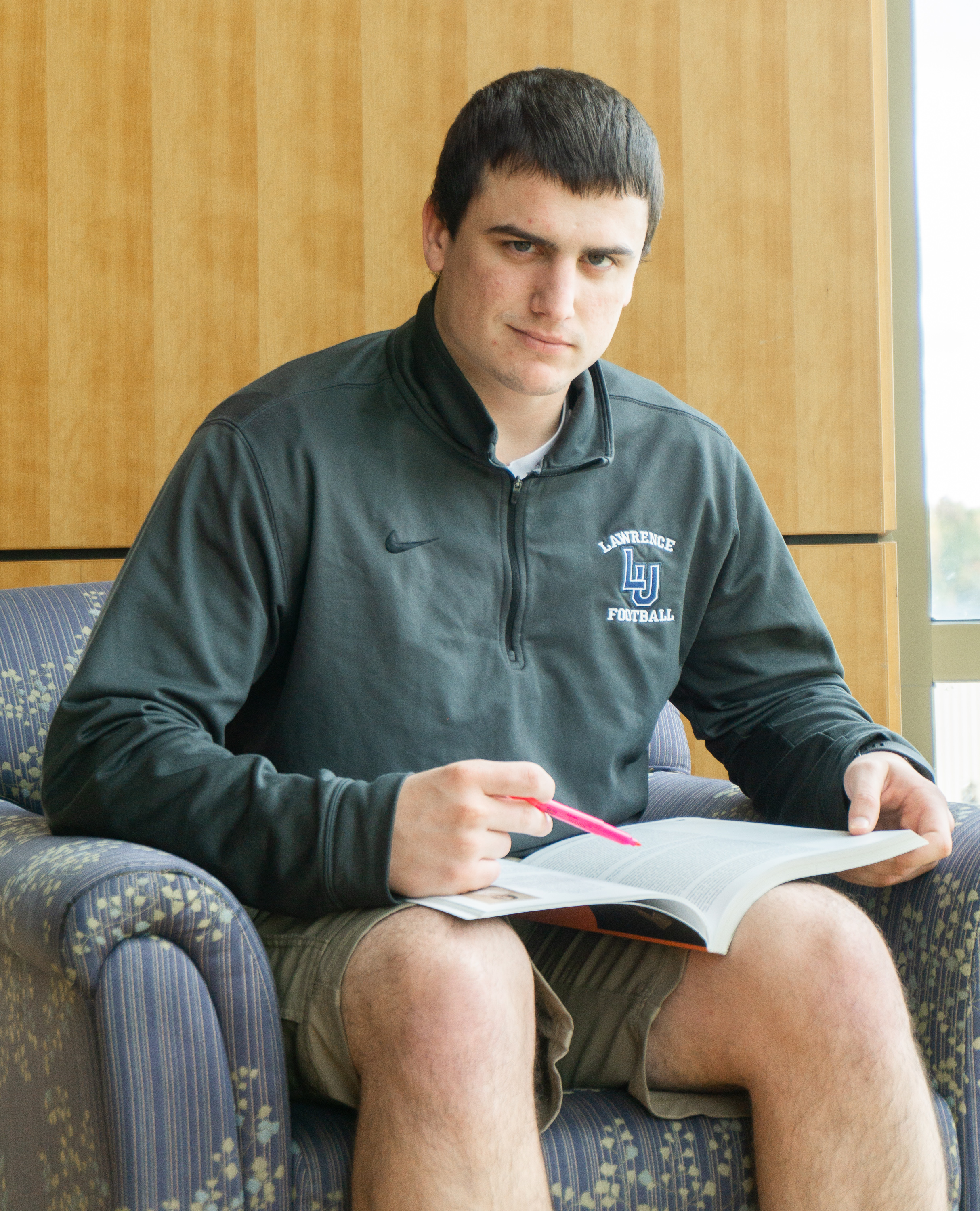 Sully Sullivan is a sophomore at Lawrence University from Palmetto High School in Parrish, Florida. He currently plays receiver for the Vikings and is second on the team in both receptions and yards, having reeled in 14 passes for 237 yards at a whopping 16.9 average yards per catch. Sullivan earns his first ever Athlete of the Week honors after his 80-yard catch-and-run touchdown in the Vikings 47-21 loss to Macalaster College. Most impressive has been his huge leaps as a team contributor from last season to this season. In Sullivan’s freshman season, he caught only two passes in six games for 36 yards and a touchdown, which he effectively doubled in his one-play effort last weekend. He is studying biology at Lawrence and hopes to be a pediatric physical therapist after graduating.

Wyatt Lee: Big play for you on Saturday as you picked up an 80 yard catch and run touchdown, which as a stand-alone play accomplishes everything you were able to accomplish as a freshman and more. How have you grown as a receiver from last year to this year?

Sully Sullivan: From last year to this year, I had to grow mentally and physically. I had to understand the offense before I could be a good receiver. So I waited my turn my freshman year, and I learned how to run the offense the best way I could to help my team. I had to get in the weight room to get stronger and faster. I had to catch as many balls as I could — every day.

WL: Since the football team’s week one win, it’s been a lot of disappointing weeks. So, two-part question: What have you learned about yourself during the last several weeks, and what’s been the best part of the 2018 football season for you?

SS: Something that I have learned about myself is that I am not going to be the best in the conference, but I can strive to be the best for my team to help them win. If I try to only do my job for myself, I am not helping my team and not having fun. Having fun is how I play my best games. The best thing about 2018 for me is being here for this team. It might sound corny, but I would rather take continuing playing for this team than scoring each week. I would like to score more, but I love playing with these guys.

WL: Every person on the football team can see how important family is to you. Can you talk about your family? Tell me about your parents and siblings.

SS: I love my family. They are the ones who have pushed me to be my best. They are some of my biggest fans. You could probably hear my mom and my sister from across the river screaming for me. My dad loves the game. He can also be heard — maybe more for yelling at the refs for a bad call, but he can still be heard. They all love the game, they try to come up to the home games as much as possible. My sister is a senior in high school and runs cross country and track. My older brother graduated from the University of Florida in 2017. I have a dog and his name is Dexter, after Dexter Jettster from Star Wars.

SS: I call my family all the time. I love talking to them. Well, I mainly call and talk to my mom. It is the number one rule she gave me when I decided to come to Lawrence — “You have to call me every day.” So I do. They support me by making sure I am doing OK, asking how practice went, and then they come up for almost all the home games.

WL: What’s the biggest thing you will accomplish at Lawrence?

SS: The biggest thing I will accomplish at Lawrence is graduating. That is the main goal. Walking across the stage, moving on to the next step in life.

WL: If you had to play a sport other than football, what sport would you play?

SS: If I had to play another sport, I would probably try baseball. I think it would be a fun sport to play. I am not good at soccer, basketball, or tennis. I feel like baseball would be my second choice after football.

WL: What’s something people at Lawrence should know about you?

SS: One thing that Lawrence students don’t know about me is that I have run eight half marathons within a two-year span. The one that stands out the most to me was one in 2016 called the Alamo Half in San Antonio, Texas.

Photo by Quinn Giglio. Sully Sullivan is a sophomore at Lawrence University from Palmetto High School in Parrish, Florida. He currently plays receiver for the Vikings and is second on the team in both receptions and yards, having reeled in 14 passes for 237 yards at a whopping 16.9 average yards per catch. Sullivan earns…