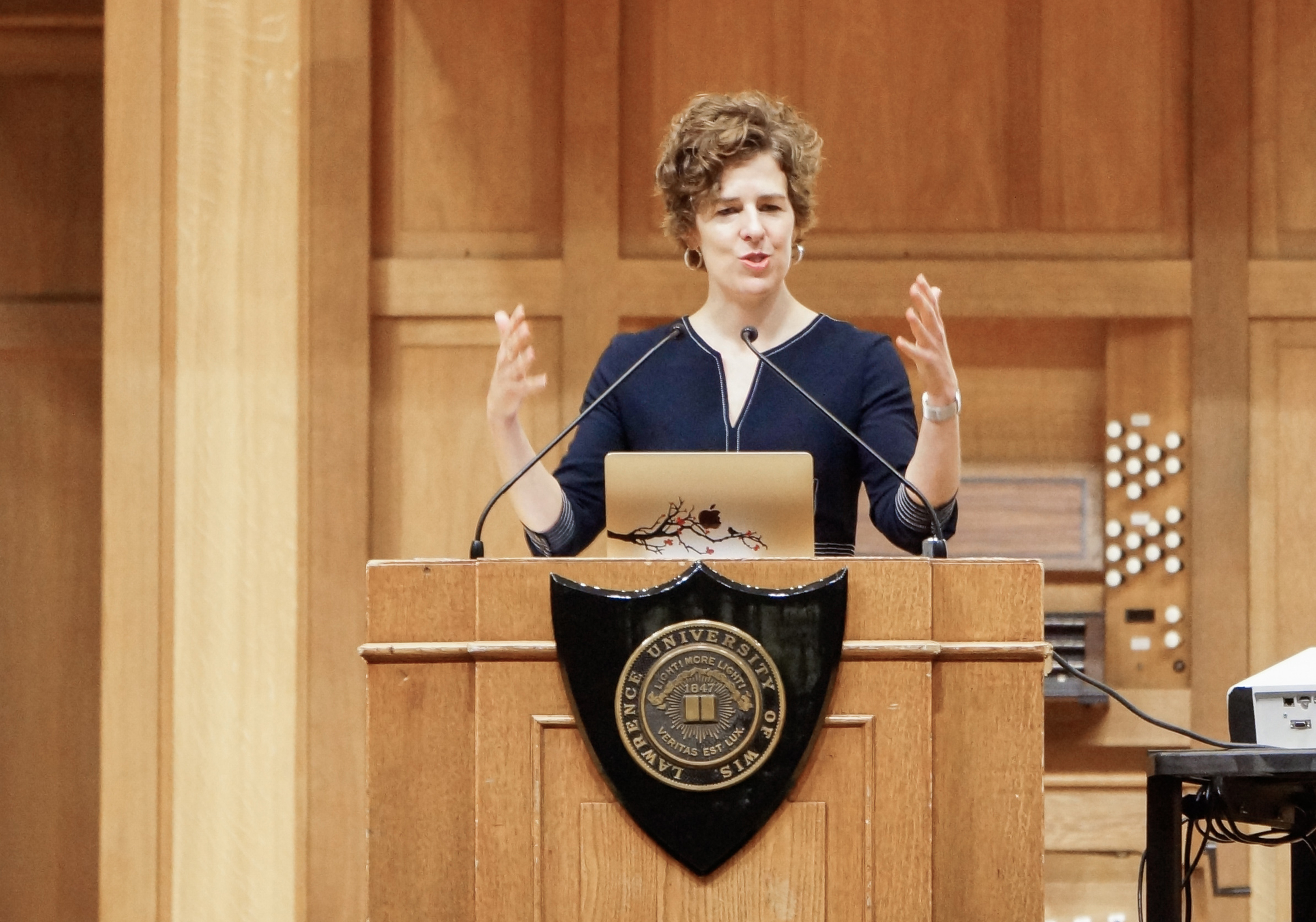 Professor of Political Science and the Natalie C. Holton Chair of Letters & Science at the University of Wisconsin-Madison Katherine Cramer delivered Tuesday’s Convocation on politics and tolerance.

Professor Katherine Cramer of University of Wisconsin-Madison was the second speaker for the 2018-19 Convocation Series. Cramer’s speech, “Listening Well in a World that Turns Away,” was held in Memorial Chapel at 11:10 a.m. on Tuesday, Oct. 23.

In President Mark Burstein’s welcome at the beginning of the event, he read a land acknowledgement for Lawrence’s Appleton and Door County campuses. He recognized that the “Menominee Nation stewarded this land” and asked people to pay respects to the elders, past and present.

Following President Burstein’s welcome, the New Music Ensemble directed by Visiting Assistant Professor of Entrepreneurial Studies Michael Clayville performed “Set Sail for the Sun.” This piece emphasized the importance of finding one’s voice, hearing the voices of others and joining together. The music connected with Cramer’s upcoming speech, for she spoke of the importance of listening as well as advocating.

Prior to Cramer’s speech, one of her former students, Stephen Edward Scarff Professor of International Affairs and Associate Professor of Government Jason Brozek,introduced her and personally called for the audience to listen especially to those shouting for basic rights. He encouraged the audience to amplify those voices that had been marginalized.

Cramer began her speech with a simple question: “Why am I here today?” She explained that she had written a book, “The Politics of Resentment: Rural Consciousness in Wisconsin and the Rise of Scott Walker,” and it had turned into something much bigger than she had originally expected. Cramer introduced her speech by setting it up to be delivered through personal anecdotes.

Cramer’s story began when she was a graduate student at the University of Michigan. She conducted field research in the deep rural South where she would interview people about politics. However, Cramer found that she acquired the most information between the questions or when the interview was finished, and she would close her laptop.

Cramer found that people wanted to share their personal stories. They wanted to tell why they believed what they did, and people wanted to tell their life stories to her. She found herself approaching the post offices—what was considered the hub for communication—in order to hear more. Cramer chuckled, “I found that I loved doing this research because I loved eavesdropping.”

Not only did Cramer love listening, she also loved her home state, Wisconsin. With that passion for the state she grew up in, Cramer decided to study in Wisconsin—specifically how social class identities affect how people interpret politics.

This research was conducted, once again, in informal settings at the communication hubs of town. These were typically diners, cafes and gas stations. Cramer would find a group of regulars and insert herself into conversations by simply saying, “Hi, I’m Kathy!”

Cramer’s tactic for these conversations was to listen as much as possible. She sought out rural communities to do her research in, which was not difficult in Wisconsin, for most of the areas in the state are considered rural. These rural townspeople informed her that Madison and Milwaukee—the most urban areas of the state—were receiving far more than their fair share.

This perception was shaped by what Cramer called “rural consciousness.” These people had an identity connected with their town, and this was shown through their frequent use of sayings like “people around here” or “people like us.” Cramer found that the rural residents did not think that the urban people were contributing, but were still receiving the most funding, attention and respect.

The rural residents explained to Cramer that decisions are made in the cities, and the politics stay in those cities. There was also a perception of decay within their own towns, for the regulars she would share a cup of coffee with would then explain that their communities and standards of living had been taken away.

Cramer admitted that there were “visible signs that the town was more thriving than it is.” The people she spoke to wanted to know who—or what—had taken it away. They were looking for someone or something to blame.

They placed blame on the city, city people, elites, the Democratic party, as well as racial and ethnic minorities. Cramer explained that resentment had been bred, and it was powerful, for one could tap into just one corner of it and find a surplus of issues. For example, the townspeople’s resentment had begun as bitterness towards the city, but it spread to a wide variety of peoples.

Cramer stated that resentment was exceptionally dangerous in its ability to distract people from important topics. With resentment, there would be no change, and the same people would always have power.

Cramer then spoke on America’s democratic system as a whole and what it needed to change. Instead of prioritizing profit in relation to communication, she called for a focus on listening. Rather than further polarizing the political climate, she asked the audience to observe how their concerns matched with people near and far from them.

She explained that it was nearly impossible to know what other people were saying, and it was also difficult to be connected to the government. Cramer stated that people “need to be heard” both by the government and by other people.

Cramer then addressed Wisconsin politics more specifically. When Governor Scott Walker passed Act 10, one hundred thousand people showed up in Madison to protest. This act eliminated collective bargaining of public employees and took money out of Madison, rather than further funding the city like the previous governor, Jim Doyle, had been planning.

Madison was outraged, but Cramer found that once she left the urban area, it did not take long to hear “It’s about time.” Walker had heard the cries from the rural communities and turned funding in their favor. She then used this example to explain the 2016 Presidential Election.

Similar to Governor Walker, President Trump had said “I hear you” to a class of people. He acknowledged in them a right to be angry and truly tapped into their resentment but then placed blame on other people. Once the polls showed President Trump’s certainty of winning the race, Cramer was quickly contacted by The New York Times.

The Times wanted to know how President Trump had appealed to white, middle-class workers. Cramer understood this as, “We missed something. Please help.” She, once again, found herself explaining the basis of resentment.

Cramer found herself being called the “resentment woman,” which she admitted “kind of killed [her] in a way.” She explained that she is far more hopeful than that title makes people think.

Despite the flood of responses that she has gotten for her book—many furthering blame onto the opposing side—Cramer is still optimistic for the political climate.

Left-leaning responses spoke of the cluelessness and lack of education of the rural people. The rural people then responded once again with saying that city people are being fooled and are unable to reason for themselves. Both sides were critical of the tolerance, the opinions and the tactics of the others.

Cramer explained that her book “killed a part of [her] that was a little naïve about democracy and our ability to see the good in each other.” With attempts to reignite her hope for the political climate, Cramer explained her project in collaboration with the Massachusetts Institute of Technology Lab for Social Machines and non-profit partner Cortico.

Cramer’s project is called “A Local Voices Network” and will be used to facilitate and record groups of four to six people in political discussions, specifically in Madison. Questions would aim to recognize people’s concerns and their hopes. Then, a recording from reactions in other parts of the city would be played to people.

This information would hopefully then be given to local news media to include people’s opinions in coverage. Ideally, it would eventually be raised up to candidates as well. Cramer concluded her speech with a call to action after explaining her project.

Cramer stated, “We need better behavior from our leaders. We need them to exemplify listening.” However, she acknowledged that people do not have to wait. She believes that there is “no better time than right now to … listen.”

Although listening is generally assumed to be a simple act, Cramer admitted that it was actually quite complicated. She encouraged people to give themselves the luxury of not responding. Instead of thinking about how to respond, just listen.

Following Cramer’s speech, the audience was invited to share their experiences and ask questions. During this time, Cramer admitted that most of the people she spent time with during her research were “older white guys.” She explained that it was hard to know what younger people in these rural communities had to say, but their absence seemed to speak volumes.

Cramer also acknowledged the difficulties in being a good listener and advocating for listening instead of refuting each other. She admitted that it is especially difficult with someone close to you, but it is still necessary. “We have to figure it out,” Cramer explained.

Cramer also touched on how she maintained a sense of humanity while conducting her research. Originally, she had thought of herself as an instrument that just needed to observe. However, she realized that “power is not in [her] being an instrument … but a person.”

Cramer called on people to be caring and genuine when discussing with others. An audience member then mentioned that politicians do not seem to care or to be genuine. Cramer recognized this but also explained how she realized that politicians have very little opportunity to listen. Their current priority is to raise money; they do not have the chance to just listen.

Despite the many problems that Cramer recognized with America’s current political climate, she still holds hope for the future—not only for citizens but also for leaders.

Additional Lawrence University events related to this topic include a community conversation about the convocation with opportunities to attend both on Friday, Oct. 26 at 8 a.m. at International House and on Tuesday, Oct. 30 at 8 p.m. at Sabin House.

In addition to this conversation, the local social justice group, ESTHER, will be presenting a simulation experience called “Walk in Our Shoes” on Tuesday, Oct. 30 at 6 p.m. at Memorial Presbyterian Church. To attend this event specifically to better understand the experience of Latinx people living in the Fox Valley, those interested must register online.

The third Convocation in the 2018-19 Series will be delivered by Phil Plait. Plait is an astronomer, writer and science blogger who will deliver a speech called “Strange New Worlds: Is Earth Special?” on Thursday, Jan. 17, 2019 at 11:10 a.m. in Memorial Chapel.