Athlete of the Week: Ethan Simmons 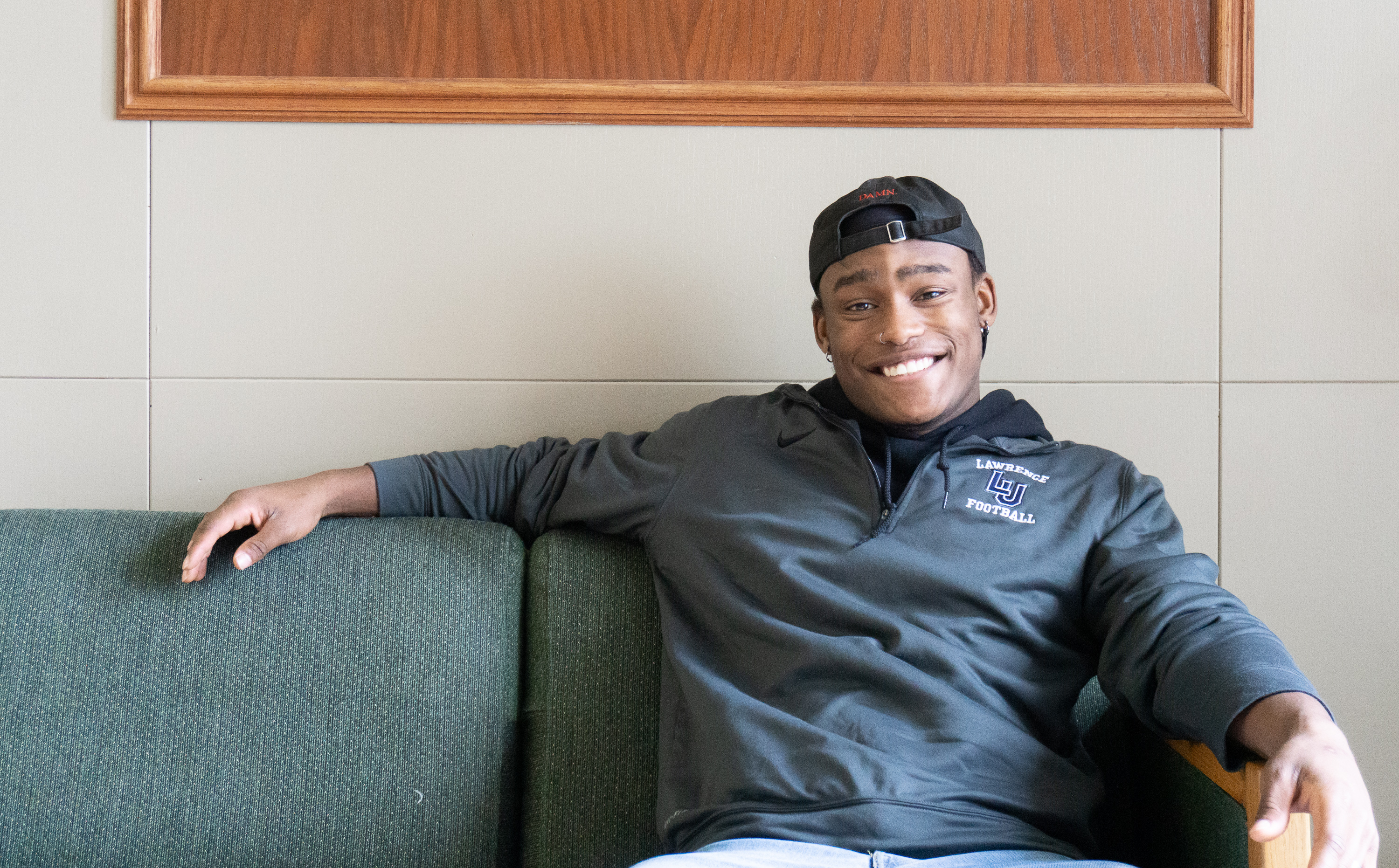 Ethan Simmons is a sophomore football player and track star from Legacy High School in Northglenn, Colorado. Simmons has proved to be the most electric athlete on the Lawrence football team, playing wide receiver, running back and being a Swiss Army knife for the Vikings on every special teams unit. Simmons has made a habit of being a clutch performer for the Vikings; in the football team’s 32-27 win over Beloit College, Simmons scored two touchdowns, including the ultimate game-winner. Right before the half, he made a diving, 31-yard touchdown catch in the back of the end-zone to pull the Vikings to within a single point. Then, in the third quarter, Simmons picked up a punt off the bounce and ran it back 70 yards for the decisive score. Earlier this season, Simmons performed similar heroics in the Vikings’ trip to Lake Forest where he blocked a punt and returned it for a touchdown, and also made an acrobatic catch near the goal line late in the first half. Simmons has accounted for all of the Vikings’ special teams’ touchdowns this season, and is the only athlete on the team to take in-game snaps on offense, defense and special teams this season. Simmons gets the nod for Athlete of the Week for his efforts in helping the football team snap a six-game losing streak. He was also named Midwest Conference Special Teams Player of the Week. He is a psychology major with a minor in economics. He also runs track and is the cofounder and brotherhood coordinator of Brother to Brother, a men of color empowerment organization.

Wyatt Lee: You received your first  Midwest Conference Player of the Week honors. What’s that mean to you?

Ethan Simmons: I was pretty happy to find out about the title after such a good team win on Saturday. I’m glad I could make my family, friends and teammates proud.

WL: You scored the game-winning touchdown in the game against Beloit with a 70-yard punt return touchdown … that you picked up off a bounce. Can you walk me through your thought process before, during and after that play?

ES: To be completely honest with you, before the play it was pretty disorganized. We were still trying to get some late substitutions in and we had people yelling and running around even when the ball was kicked. That being said, during the play I wasn’t having some dramatic “this is it — this is what I’ve been training for” moment, or anything like that. My call for the ball muffled and sounded nothing like English, so I didn’t even know if anyone even heard me. But when the ball popped back up, I don’t think I can describe my thought process because I really didn’t have one. My playing style has always been heavy on instinct and light on thought. My gut said to grab it, I listened, then did the dash.

WL: Your efforts, along with the rest of your team, stopped a six-game losing streak with the win this weekend. What was the general feeling for the team after the game? What’s that mean for the team as you finish out the last couple games of the season?

ES: It was definitely a breath of fresh air to walk away on top. Getting this win was big because now I feel the team can focus on playing the rest of the games at our level. If we do that, I know we can best the rest of our opponents.

WL: Lawrence is playing Ripon this week, the oldest college rivalry in Wisconsin. Any thoughts on the rivalry?

ES: I’ve never been big on rivalries, personally. No disrespect to the history, but training to win a football game has to be the focus every week.

WL: You also run track for Lawrence. What’s the transition between football season to track season like for you?

ES: I feel like I’m perpetually out of breath for like three weeks. Getting into shape for track is pretty humbling. It’s definitely a shift in training, but it’s always fun to feel yourself improving.

WL: How did you first get involved with athletics?

ES: I dabbled in basketball, football, soccer and gymnastics through childhood, but my interest took off when I reached high school. When I got there that’s when I really found that football and track were the ones for me.

WL: What’s your favorite way to train for the season?

ES: I love running hills and practicing route running in the early morning during the off season. It gives me a productive start to my day and helps train the most important aspects of my skill set.

WL: Favorite thing to do when you’re not at practice?

ES: FaceTiming my woman back home.