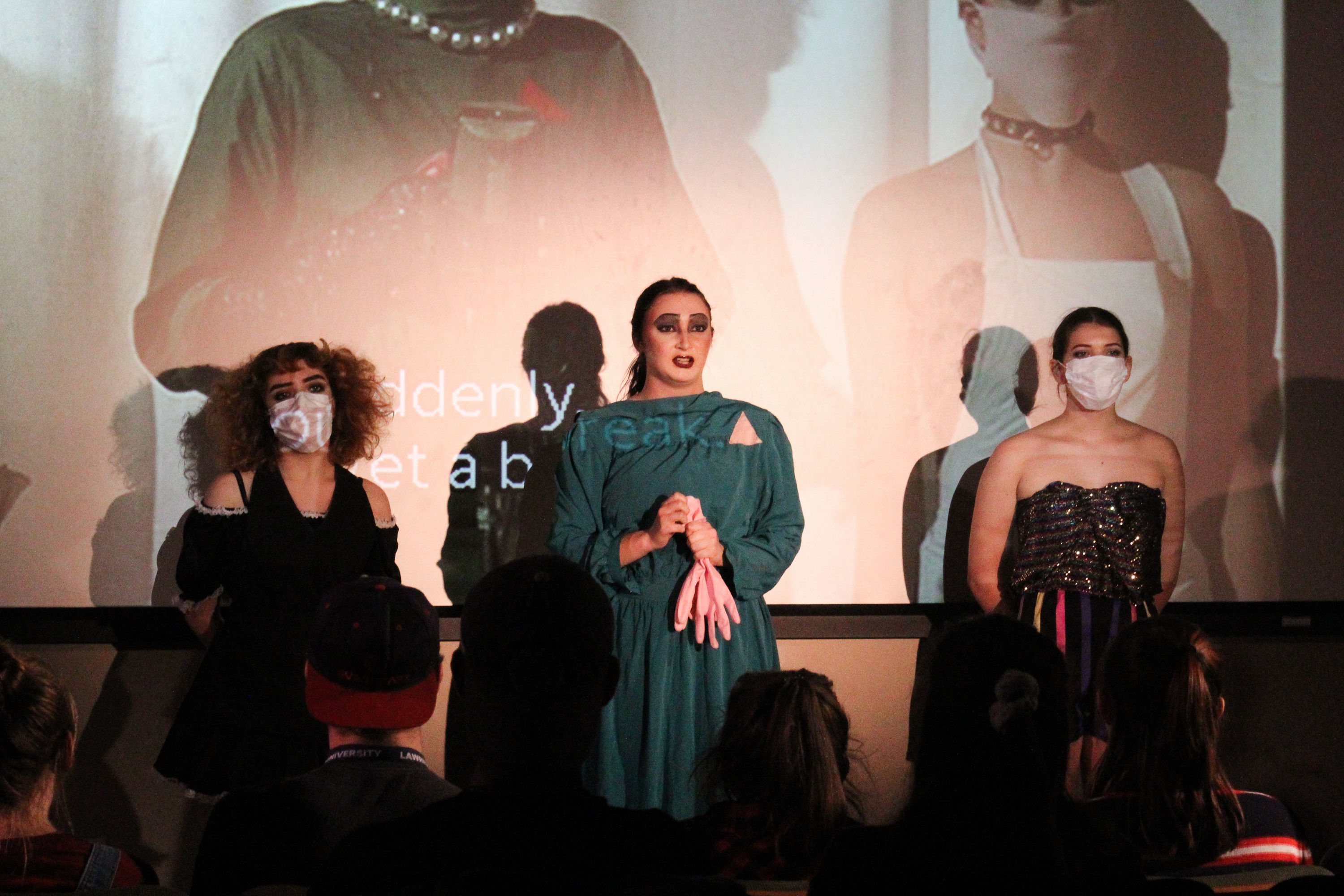 The production of the Rocky Horror Picture Show was acted out in front of the movie screen in the Cinema.

Lawrence University’s Prescribed Escape Productions (PEP) put on the annual “Rocky Horror Picture Show” at the Warch Campus Center Cinema this past weekend. Only having bought the rights for one day, the showtimes were 12:01 a.m., 8 p.m. and 11:59 p.m. on Saturday, Oct. 27.

PEP is an independent, student-run theatre company that aims to provide Lawrence as well as the surrounding community with thought-provoking and well-produced theatre. In their annual production of “Rocky Horror Picture Show,” the group performed a shadow cast of the movie, in which they acted out the film that was being played behind them on the screen.

While waiting to enter the cinema, audience members who had never seen the show before were marked as virgins and were then encouraged to participate in the Virgin Ritual. This ritual varies from production to production, but this year included a banana eating contest in between the legs of the participant’s partner.

Following the virgin ritual, the “Rocky Horror Picture Show” began to roll. This musical science-fiction horror-comedy film was released in 1975, and audience members were reminded that although some of the terms used in the movie are outdated and not politically correct, this film was revolutionary at the time.

This low-budget cult-classic tells the story of a love-struck couple — Brad (Delaney Olsen) and Janet (Marissa Lake) — from the narration of the criminologist (Charlie Oertel). When the newly engaged couple gets a flat tire, they stumble into the home of Frank-N-Furter (Zoe Lee), who is referred to as a “transvestite scientist.”

Amidst song and dance, including the famous “Time Warp,” Brad and Janet become far less innocent and are revealed Frank-N-Furter’s latest creation — a beautiful man named Rocky (Zoe Adler). Throughout the plot, many interesting characters are also introduced including a wild biker (Alesandra Aragon) and an eerie butler (Olivia VanSlyke).

As the film rolled, audience members were encouraged to participate along with the “Sextras” in dance and jesting of the film. Audience participation for the film began in 1976 and has continued ever since across the country. Although participation was greatly encouraged, the theme of consent was emphasized throughout the production.

Prior to the filming, an introduction was provided that specifically addressed consent and its role in the performance. This included consent for the cast as well as for audience members.

For example, despite the raunchy behavior of the cast, they had not provided consent to be touched by the audience. Also, despite being warned that this was an interactive experience — especially for those sitting in the front or near the aisles — audience members would always be asked not just once but twice if they were comfortable being used for part of the skit.

Despite the reputation of “Rocky Horror Picture Show” as being a bad movie, it is one of the most profitable films of all time. Although the content is seen as vulgar and outdated, groups across the nation and the world host shadow-cast performances of the film and is a Halloween tradition for many people.