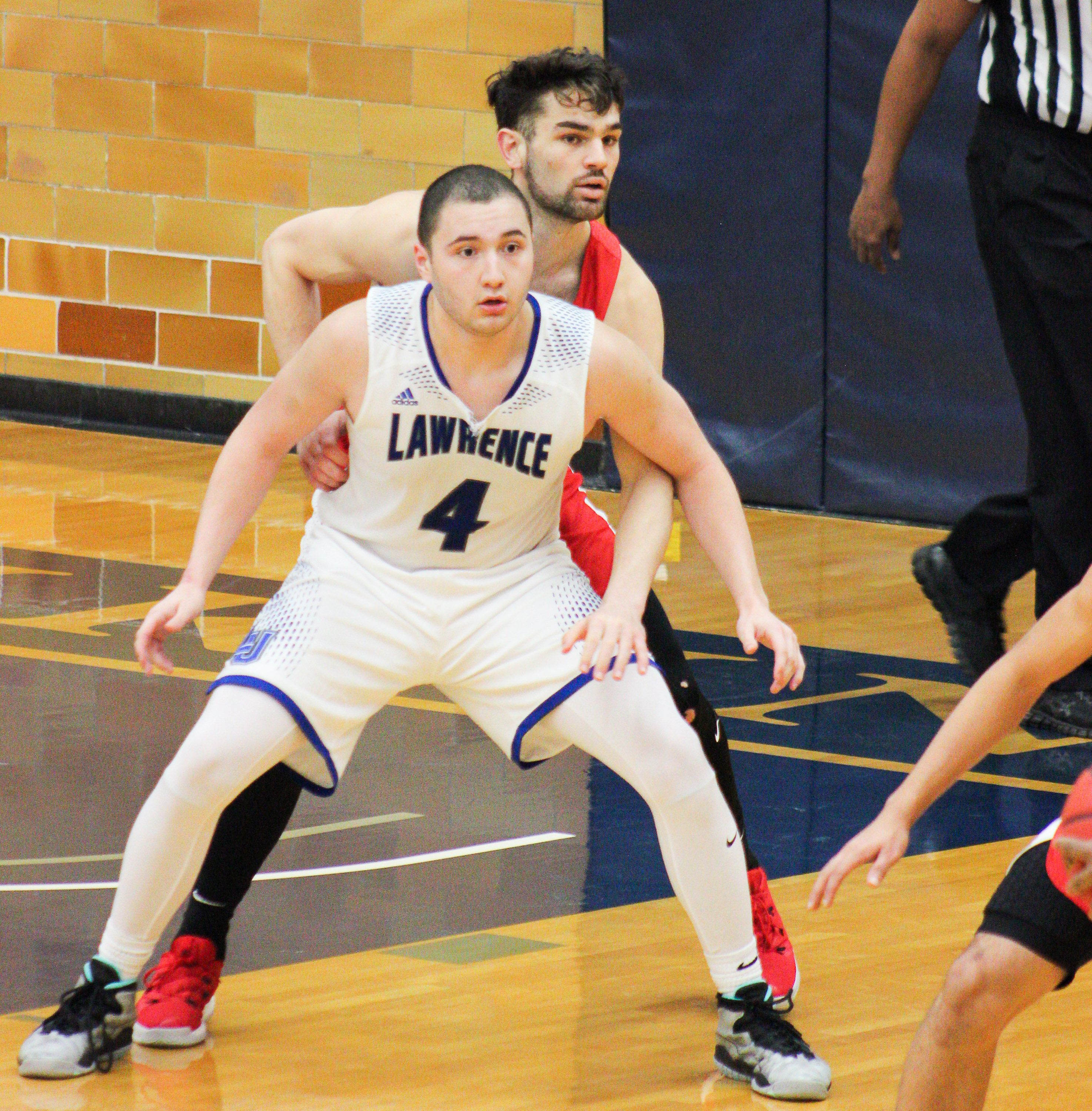 Sophomore Julain Deguzman attempts to get open on offense early in the second half.

This past weekend, as everyone was getting settled back on campus, the Lawrence University men’s basketball team played host to the Monmouth College Fighting Scots at Alexander Gymnasium. The team is in the thick of their conference schedule and are looking to make a run for the conference tournament.

The Vikings are led by a new coach, Zach Filzen, and despite the transition, the team got off to a solid start. Sophomore Brad Sendell said, “The season as a whole has been pretty successful for the team, as well as myself. Since this is our head coach’s first year, there have been some ups and downs, which are to be expected. I think we are constantly improving, which has been one of our goals since the first day of practice. Personally, I have had my struggles as well. Early in the season I was struggling to consistently make shots, however, I am becoming more comfortable in our offense and playing with the guys.” Junior Quinn Fisher felt similarly, saying, “The season has been going well so far for both myself and the team. At the beginning of the year, there was definitely an adjustment period getting used to our new coach and system, but I feel like we have progressed well and have now reached a point where we are very confident going into every game.”

The game against Monmouth was tight all the way through, as neither team lead by more than nine points. The game also featured six ties and nine lead changes. Yet, the Vikings were able to pull it out down the stretch as senior George Mavrakis and Sendell made some clutch free throws to seal the Lawrence win. Sendell led the Vikings with 20 points while Fisher added 14 of his own. Mavrakis had five rebounds in the contest while sophomore Mason Materna and junior Tyler Klug each had four.

With the win, Lawrence moves to 8-6 in the season and 5-2 in Midwest Conference play. They hope to build off the win and power through the heart of their conference lineup. Fisher explained, “As far as goals for the rest of the season, as a team we are just trying to improve every day and get to the point where at the end of the season we are playing our best basketball both offensively and defensively. Also, since the start of the year our goal as a team has been to make the conference tournament (only the top four teams make it), so that has not changed.” Sendell added, “We feel like if we get into this mix of four teams and play to our potential, we have a legitimate shot of winning our conference and advancing to the national tournament.”

The team is starting to get in the groove, and they are hoping the Lawrence students can also join them for their games at home. “I would like to encourage anyone who hasn’t been to a game to come check one out! We appreciate any and all support. We hope that we can reinvigorate the men’s basketball program and instill a sense of pride to the Lawrence community!” said Sendell.

Fisher added, “I would like to thank the students for the strong support we have gotten so far this year (we had a great crowd for the Monmouth game) and we all look forward to continued support the rest of the season. Our next home game is versus Beloit on Saturday the 19th [of January with the women’s game at 1 p.m. and the men’s game at 3 p.m.” 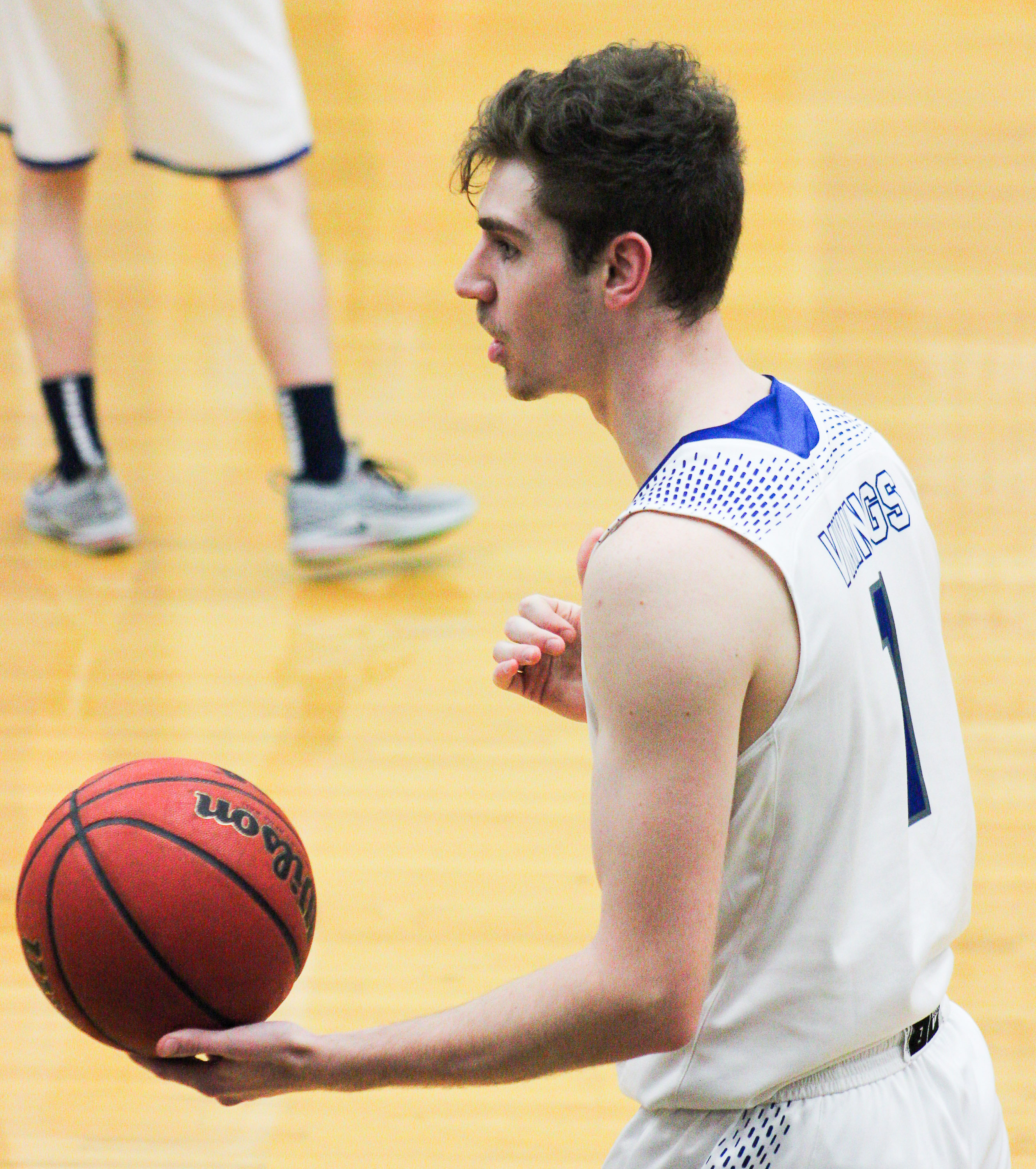 Senior George Mavrakis stays focused on the next offensive play.