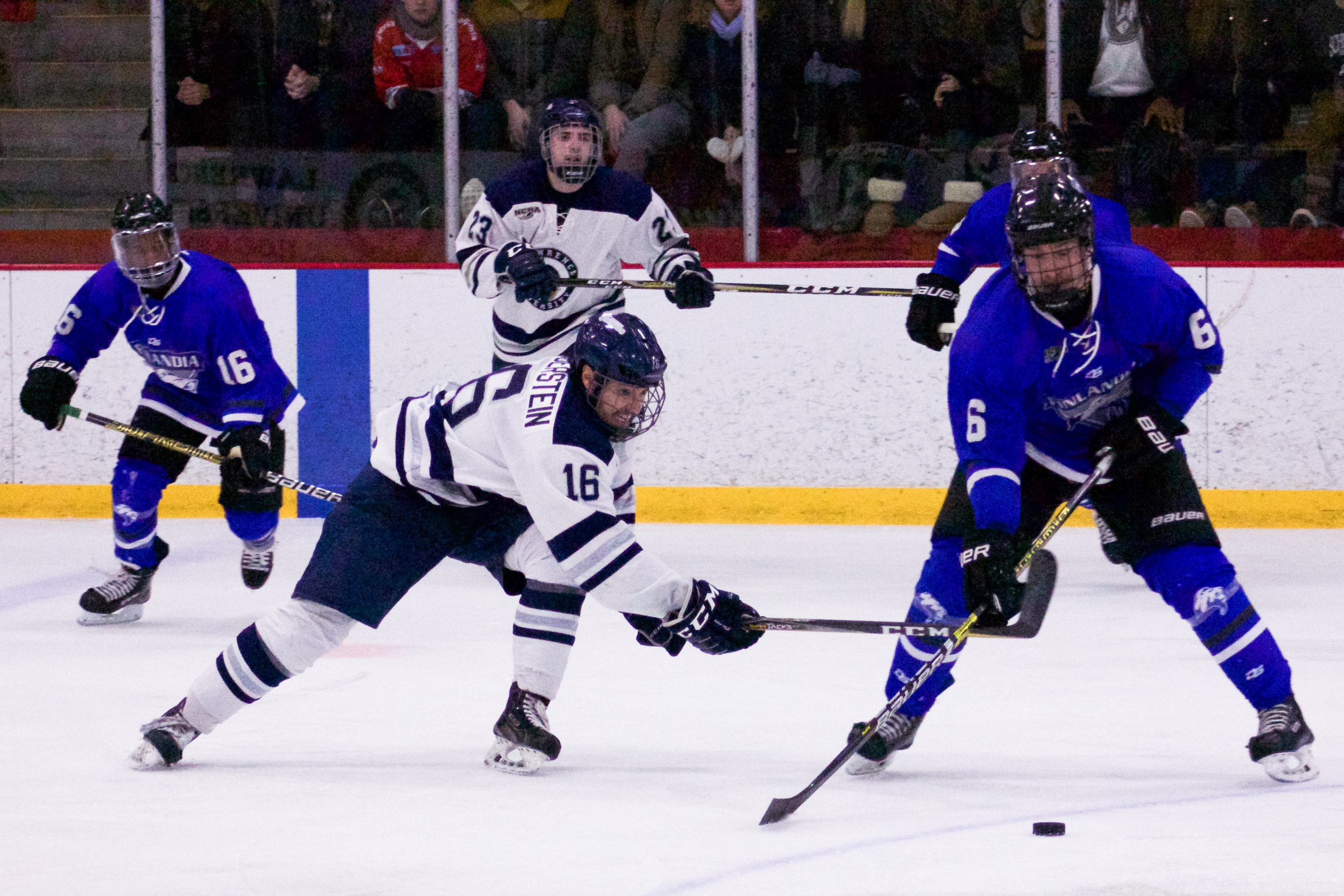 The Vikings continue to battle as sophomore Jacob Dobberstein glides in with junior teammate, Jordan Boelke.

The first competitive weekend in the new year has been a rough one for the Vikings as the Lawrence University men’s hockey team fell to the Finlandia University Lions, 4-0, and the St. Norbert College Green Knights, 4-1. Despite their hard and vigorous efforts in both games, the Vikings were unable to pull ahead. However, they were still able to hone in on their 5 on 5 play more, which will be needed further down the line. The issue of success does not lie in their efforts or talents, but in the trickiness of finding the back of the net with a fickle puck.

“We have really struggled to find the back of the net,” said Head Coach Mike Szkodzinski. “We had several chances both nights – and we will just have to keep creating those chances.” In order to create more chances at the net, the Vikings will have to continue to play with their utmost determination and drive the puck and themselves at the net. As of recent, the team has been able to capitalize on their powerplays, which have been very useful during games. By limiting the penalties on the Vikings, the team creates more opportunities on the powerplay and on even ground. Having the upper hand against a team is good for the Vikings, but opportunities like that do not last for the entire game. In order to become a real threat, the Vikings must be able to pull through with their entire line on the ice offensively, as well as having a strong defense to support such opportunities on the other end of the ice. The Vikings will keep these thoughts in mind as they look ahead to this upcoming weekend’s road games against Aurora University and Lake Forest College.

“We need to make the game physical and play with an edge, but we know we can have success if we play solid defense and take advantage of our offensive opportunities,” said senior Josh Koepplinger. Both of the games this weekend are against teams that skate well and are very skilled.

“For us to be successful, we need capitalize on our scoring chances,” said junior, Jacob Drinkard. These next two games, along with the remainder of the season are very important for the Vikings, so it is vital for the team to give their all and show the physicality, resilience and determination that they have shown up to this point in the season as they move forward.

“The fact of the matter is, we have everything still in front of us,” said Coach Szkodzinski. “We are just 4 points out of a playoff berth and we play the teams in front of us over the next 4 weeks in these remaining eight games.  It will be a battle – but if I know anything about this group, they will embrace the challenge each and every night!” One thing that the team specializes on is their support and motivation for each other during these tough times where the results do not reflect their efforts. By having each other to rely on, the teamwork will help them thrive and the result of a win will be that much better.

With the team heading into a pivotal point of the season, it is important for them to focus on their own formulas in offense and defense, as well as create more opportunities for shots on goal. Hopefully this weekend will show some mercy and the puck will land in the back of the net a few more times than it has in this past weekend. It is the time of season where determination and hard work will help the Vikings win games and pull ahead in the rankings over their opponents. The Vikings will travel to Aurora University on Friday and continue their weekend at Lake Forest College on Saturday.