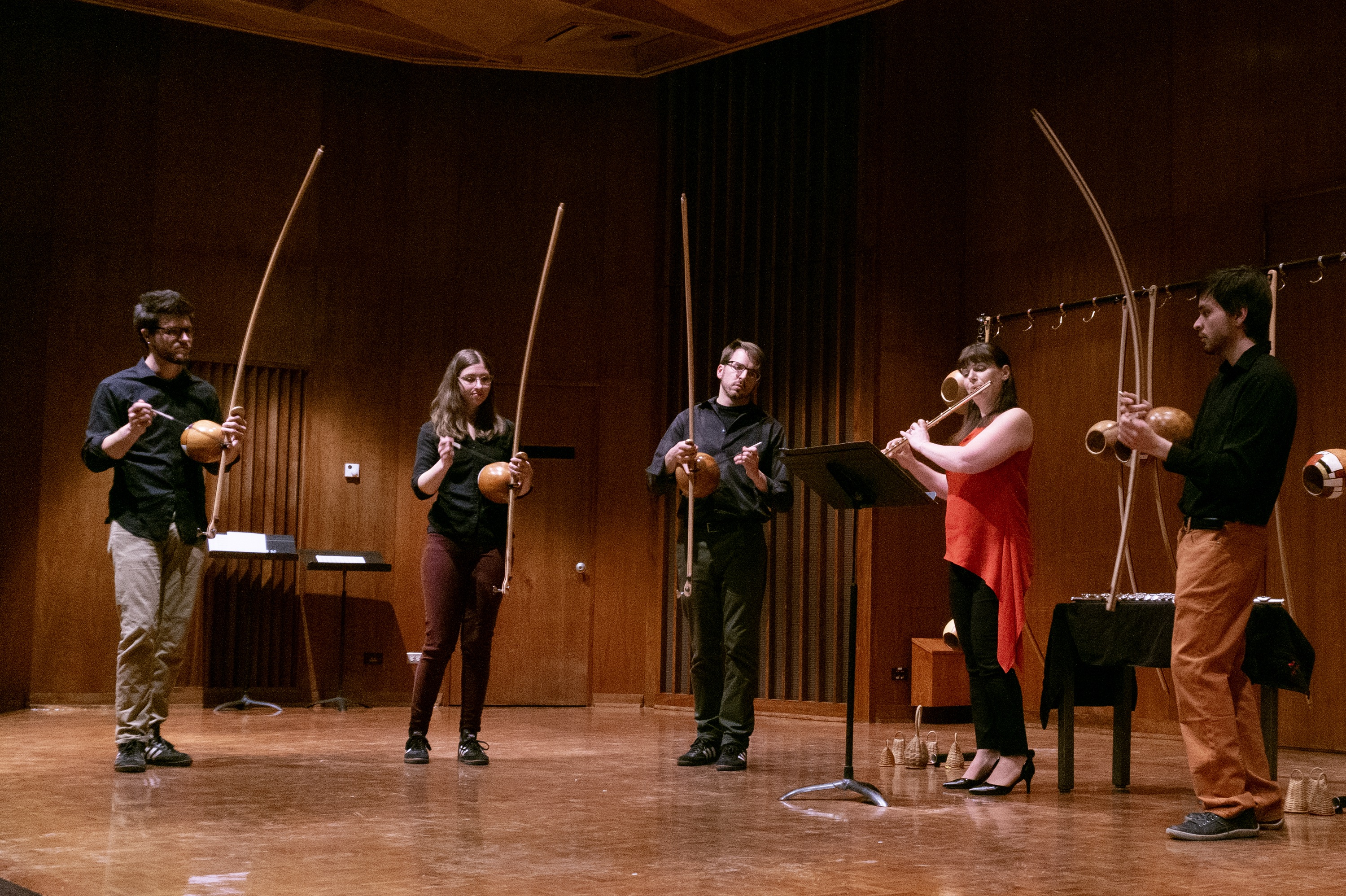 On Wednesday, Feb. 6, the World Music Concert Series presented a performance by Projeto Arcomusical at 8 p.m. in Harper Hall. Led by Greg Beyer ’95, Projeto Arcomusical comprises six musicians who play the Afro-Brazilian berimbau, a musical bow with a single string pulled taut over a curved piece of wood and a hollow gourd attached near its middle. The members of Projeto Arcomusical further the mission of the non-profit Arcomusical by educating audiences everywhere about the berimbau and its music.

The members of Projeto Arcomusical stood onstage in a semicircle and tuned by striking the strings of their berimbaus one after another with long sticks. As they began to play, the initial sounds of the berimbaus left the audience in awe: the striking of their strings with the musicians’ sticks produced clear, twangy timbres mingled together in a pleasant sonority. Ostinatos bounced off of one another, and the whole group crescendoed as one. The musicians’ physical enjoyment of their music-making was palpable: they made eye contact with one another, breathed audibly, smiled and swayed with the beat of the music. In addition to striking the strings of their berimbaus, the musicians struck the wood of the hollow sphere, which sounded like a drum. The ensemble’s subtle transformation of rhythms gave the music an exhilarating feel that captivated everyone in the audience. The fact that they played together, on time and without hesitation gave the music an immediacy and a life rare in performances these days.

After the first piece, Beyer introduced himself and the other members of the ensemble. He spoke of the history of the berimbau, which migrated to Brazil from Africa during the transatlantic slave trade. Then, Beyer played one of his own compositions with ensemble member Kyle Flens. This odd-metered piece contained rhythmic zaps, which Beyer and Flens passed back and forth, and harried fast notes, which Beyer and Flens played by rubbing their sticks across their berimbau strings. Next, ensemble member Raychel Taylor joined Beyer and Flens for one of Flens’ compositions, a piece called “Echoes.” Inspired by a jam session Projeto’s Arcomusical had with composer Elliot Cole, this piece had each ensemble member sing while playing their berimbaus, a beautiful sound combination that melted in one’s ears.

One of the program’s highlights was Projeto Arcomusical’s performance of “Reflection,” written by freshman composer and percussionist Aaron Montreal. As Beyer explained prior to this performance, the ensemble had conducted a residency at Lawrence with the composition studio, where several students submitted pieces for the ensemble to perform. Whereas all of the ensemble’s other music during the concert was memorized, the ensemble used sheet music for this piece, which contained great rhythmic complexities and challenges that they performed well.

Also, Projeto Arcomusical collaborated with Associate Professor of Music and flutist Erin Lesser for Beyer’s “Berimbau Sextet No. 1, ‘Kora,’” which included fluttering berimbau lines and singing flute melodies. At times, Lesser’s punctuated flute playing mimicked the percussion of the berimbaus. Other compositions performed on the program were pieces from Projeto Arcomusical’s upcoming album, “Spinning in the Wheel,” which will be released on Mar. 10.

In every piece, the musicians of Projeto Arcomusical demonstrated remarkable technical skill and musicianship. Their coordinated silences, dynamics and coalesced harmonies made this performance another superb World Music Series concert, exposing the audience to new sounds and ways of making music.

After the performance, the ensemble members invited everyone in the audience to come on stage and learn how to play the berimbau. Dozens of audience members flocked the stage, and Projeto Arcomusical members instructed everyone on how to hold and play the berimbau and answered individual questions. Overall, Projeto Arcomusical’s performance made for an engaging and educational evening that reminded everyone of the brilliant, diverse world of music.