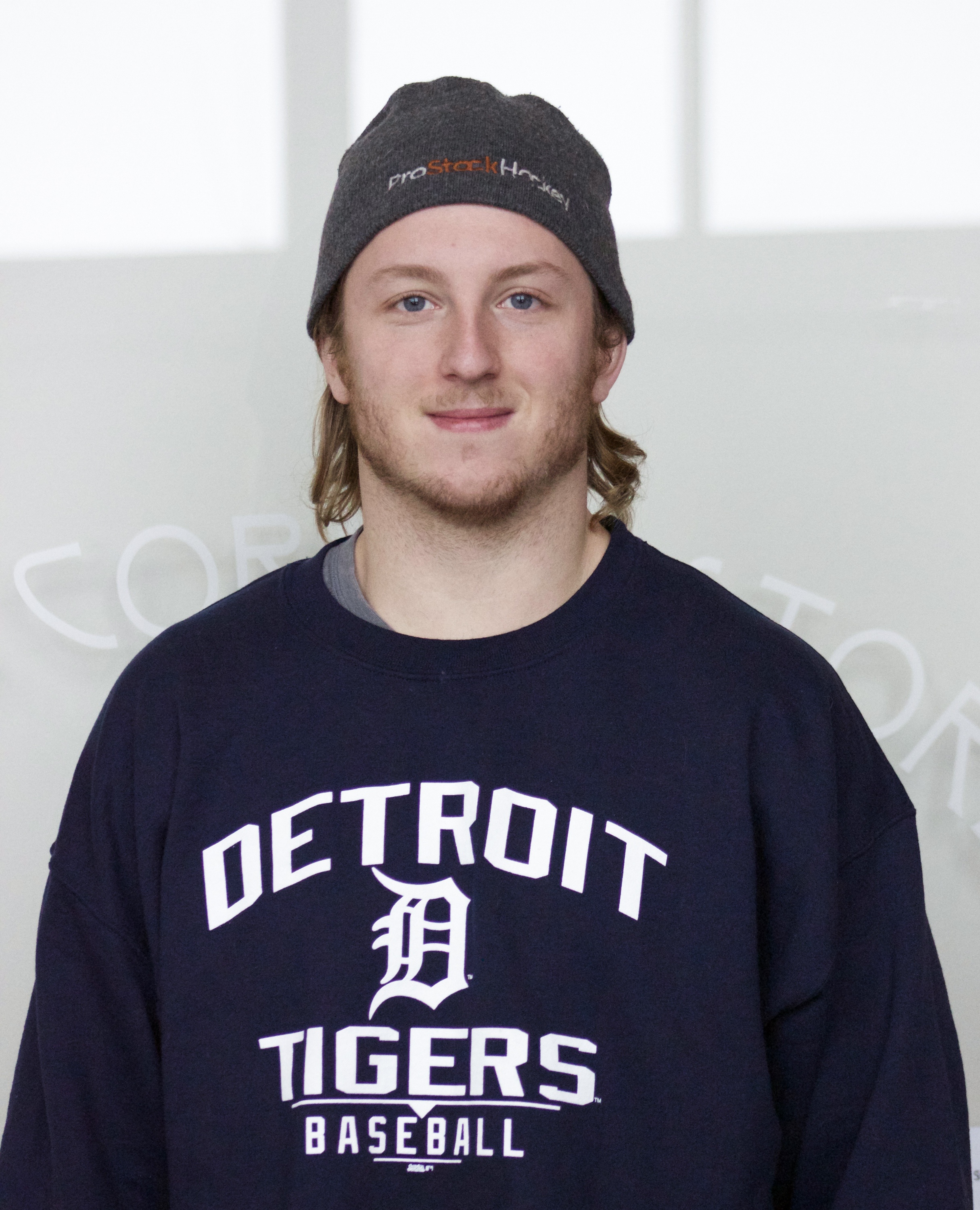 After 102 games, senior captain Josh Koepplinger has officially closed out his collegiate hockey career. I have had the privilege of watching him play, listening to his hockey stories and reporting his wise words and successes for his four seasons at Lawrence. This last time was definitely no exception.

When I asked him to give me the rundown on his hockey career, his initial response was, “Again?” So, I told him to give me more than he has before as this was a feature all about him.

“Hockey players have a little bit of a different story because we don’t come to college straight from high school,” Koepplinger began. “We have a two to three-year window where guys will usually play what’s called ‘junior hockey.’ Most of us, we move away from home and have to live on our own for a few years. So, I did that. My first year, I actually got to live at home because I played in a town near mine in Michigan. For my second year, I moved to Florida and played a year in Florida before I came here. The coaches recruited me four years ago, and I came on a visit. I committed in the late spring, and that’s how I ended up here.”

Koepplinger explained just why he chose Lawrence. At first, he focused on his family and who has influenced his success over the years and how that led him to looking into Lawrence in the first place. “The cliché answer is my parents, but it’s true,” he said. “Without them I wouldn’t have been able to play hockey, with them driving me everywhere and travelling and financially supporting my dream to play college hockey. I wouldn’t have been able to do it without them. I was fortunate enough to have my dad as my coach. ‘Fortunate enough’—I don’t know if that’s the right word. Sometimes I didn’t like the fact that he was my coach, but looking back I’m very happy I had a father figure as a coach for most of my life. I think that actually helped me be able to relate to the coach.

“Most kids have attitudes and think they’re something that they’re not and I was always humbled. I could relate how a coach had a job to do to make the most out of his players and get the best version of his team. On top of that, I had some influential coaches throughout my career. My coach my senior year of high school because he got my foot in the door in the junior hockey world. I wouldn’t be here if it wasn’t for him. He got my name out there and promoted me. I really thank him for that. I make sure that he knows that. I always come back right around Christmas time and tell him how much he means to my career. All of my coaches had an influential impact. My coach my last year of juniors while I was in Florida had a big impact. He was in touch with the coach here. It’s actually funny. Coach Szkodzinski went to Ferris State, like my dad. And my juniors coach also went to Ferris State. They never played together, but they had a mutual tie. That was pretty cool. Without those crucial people, you can’t do certain things. They allowed me to play college hockey, which was my dream.”

These influences partnered with the vibe that Koepplinger felt on his visit sealed the deal. He said, “The combination of the quality education and the weight that a degree from here carries in the real world. Also, I had the chance to play in the best hockey league for division three. Year in and year out, the national champion comes from this conference, pretty much every year. So, playing against the best would help me become a better hockey player and a better person.”

Family is extremely important to Koepplinger. It always has been. “Family is absolutely important to me. My dad got to come watch me play last weekend against Marian for the first time since I’ve been in college. He had a really good time. It was cool to play in front of him because I don’t get to do that very often. Playing juniors, I never really played around my home town very much and so he never really got to see me play too often. So, it was really cool to have him come see, and I got to score for him.”

Koepplinger stated that choosing Lawrence was the best decision he’s ever made. He would not have chosen LU right out of high school, but taking the time in juniors to find out who he was and what was right for him led him here. He felt the family aspect of this place and did not find that anywhere else. The team included him, and he felt wanted. “That was very cool to feel, you don’t feel that in every place,” he said.

While sticking with hockey would be ideal, Koepplinger has a lot of different routes his life could take him. “Hockey will always be a part of me,” he said. “When you do something for the majority of your life, it’s really hard to just give it up entirely, or at least take a break. So, I can definitely see myself in hockey down the road, whether it’s coaching, scouting or continuing to play. I want to continue playing hockey for as long as I can and as long as my body will let me. Ideally, I want to play at the next level, but I’m still waiting to see. This is kind of a weird period because our college season is over, so right now I’m technically a free agent. So, if pro teams approach me and wanted me to play for them for the last half of their season, then I could say yes, as long as I have my classes taken care of.”

If hockey is not his next step, Koepplinger is looking at more school. “I’m graduating with a biology degree and I’m currently in the process of applying to pharmacy schools. I took the PCAT in January, so that’s done and taken care of. So, I’m just waiting to hear back from schools and send them what they need. UW-Madison would be my top choice because, obviously, their reputation is great. I also applied to University of Michigan and Ferris State. Like I said, my father and grandfather both went to Ferris State. My grandfather was a pharmacist and actually owned his own business in our home town. So it would be kinda cool to follow in his footsteps,” he said.

Koepplinger’s career has been a good one filled with many amazing memories. When asked what his favorite memory was from his final season he responded, “Oh, man. We went to Europe this year. We had a really fun time. Our team definitely gelled from that. Honestly, that could have been a turning point for us. The first half of the year, we struggled pretty bad. We’re a young group and we didn’t really find our identity until we played Stevens Point, who’s the number one team in the country. It was a one-goal game late in the game. We probably played our best hockey of the entire year to that point. We used that momentum and went over to Sweden and Finland and got to play hockey over there. We got to grow together as a team. We had a lot of fun. I think that trip was the best time. But honestly just being around the guys and having that camaraderie is the best.”

With as busy as their season is, there is hardly any downtime, but Koepplinger finds a way to have some fun when he does have some downtime. “I really like to golf. I love being outside, whether it’s playing yard games, or whatever. A lot of the guys like to play spike ball or go out and hit a golf ball. During season there’s not a lot of down time, but recently the team has taken a liking to ‘The Bachelor.’ We watch that as a team, some of us. Every Monday night we get together and fire up ‘The Bachelor’ and spend our Monday nights together getting to know the girls and get into the drama,” said Koepplinger.

All in all, it has been a wild ride. As Koepplinger hangs up his skates, he has begun to reflect a lot on his time here. In regards to the impact he hopes to leave behind, Koepplinger said, “I’ve been thinking a lot about this recently with everything sort of wrapping up and coming to an end. I think the best way I could sum it up would be to leave this program better than it was when you found it when you came here. I think our senior class did that. When we came here there were a lot of negative feelings toward our team and our group on campus and I think our class definitely helped change that stigma and that perception of the hockey team as being negative people or not good people. I take a lot of pride in that. We sort of changed the culture. I think that means a lot more than wins and losses. Obviously sport is based on that, but looking at the big picture, that’s the main thing. We tried to leave a legacy that was better than how we found it.

“It’s all so fresh right now, having just ended our season on Saturday. I haven’t really had time to completely reflect on what the last four years have meant, but maybe give me a week and I’ll have a better idea. I would leave my teammates with this message: don’t settle. Don’t think you’re good enough as you are. You can always be better, whether that’s personally or as a team. That comes with being unselfish and putting the team before you. Take this to heart and always try to be better.”

Lawrence wishes him well in his future endeavors. The hockey team has been lucky to have a leader like him for the last four years.

Photo by Caroline Garrow. After 102 games, senior captain Josh Koepplinger has officially closed out his collegiate hockey career. I have had the privilege of watching him play, listening to his hockey stories and reporting his wise words and successes for his four seasons at Lawrence. This last time was definitely no exception. When I…