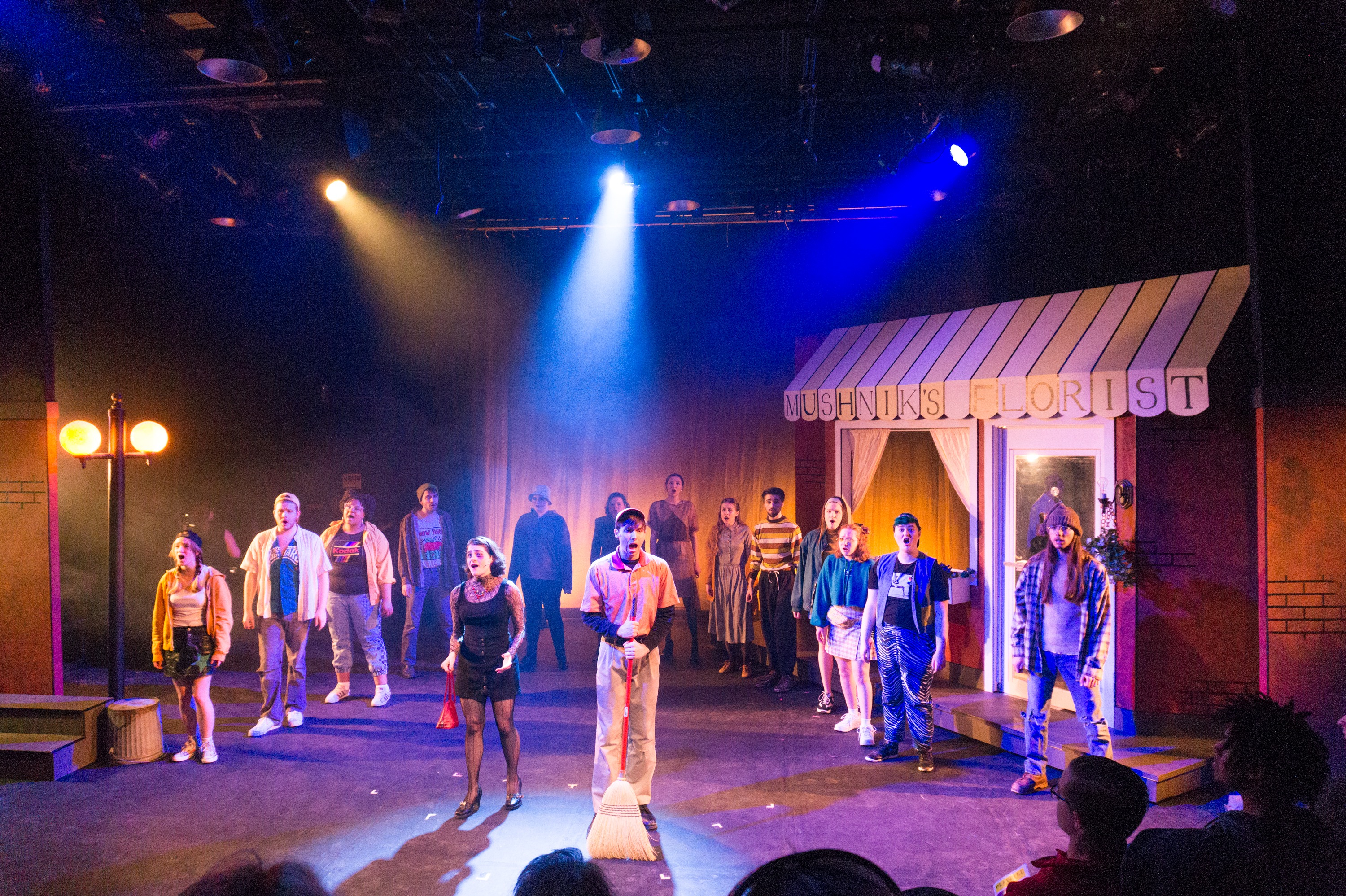 The ensemble cast of “Little Shop of Horrors” in a performance last weekend.

In a revival of the traditional musical ”Little Shop of Horrors,“ members of Student Produced Musicals at Lawrence University (SPAMALU) performed the show set in the 1990s with a few changes in order to update the work. Performances were held at Cloak Theatre on Apr. 12, 13, 14 and included an open dress rehearsal on Apr. 11.

The production was based on the 1960s’ film by Roger Corman with screenplay by Charles Griffith. In the performances at Lawrence University, members were under the direction of senior Mikaela Bolker. Music was directed by senior Maggie Smith.

Bolker set out to direct ”Little Shop of Horrors“ as a sort of “culmination of everything [she’s] learned at Lawrence.” As a theatre arts major with a minor in film studies, Bolker was determined to put her skills to the test. Her goal with this production was to involve as many non-music and non-theatre students as possible in order to represent different groups and majors on campus.

Many underclassmen participated in ”Little Shop of Horrors,“ showing a true future for SPAMALU. Both stage managers, Emilia Ciotti Hernández and Mindara Krueger-Olson, were freshmen. This representation of freshmen students shows a potential groundwork being lain for SPAMALU’s success in the future.

This fast-paced musical not only contains upbeat music, dance and a puppet, but it also touches on serious topics without making these topics the focal point of the show. Instead, it simply raises conversation. Members of the cast and crew participated in discussions of race, class, gender identity and sexuality during the preparation process.

This production evokes questions and discussions of moral ambiguity, consent and success with its complex characters and plot. As the show tells the story of poor Seymour Krelborn, played by sophomore Jack Murphy, aspiring to success with his famous and secretly carnivorous plant, Audrey II, the audience is inevitably humored by his struggle but also presented with many moral dilemmas.

The plant puppet, Audrey II, controlled by sophomores Lauren Turner and Oscar Lunday-Brautigam and voiced by junior Joe Dennis, convinces Seymour to murder multiple people in his quest to get a girl and fame. Not only does Seymour’s success involve potential problems with morals, but it also causes some questioning of what truly defines success and glory.

Work with ”Little Shop of Horrors” for this year’s production began last spring with meetings discussing artistic visions and logistics with the production team. Rehearsals with the cast began around the third week of Winter Term quickly following the auditions that occurred shortly after winter break.

According to Bolker, this year’s production of “Little Shop of Horrors” was “the most ambitious show in terms of budget and cast size through SPAMALU.”