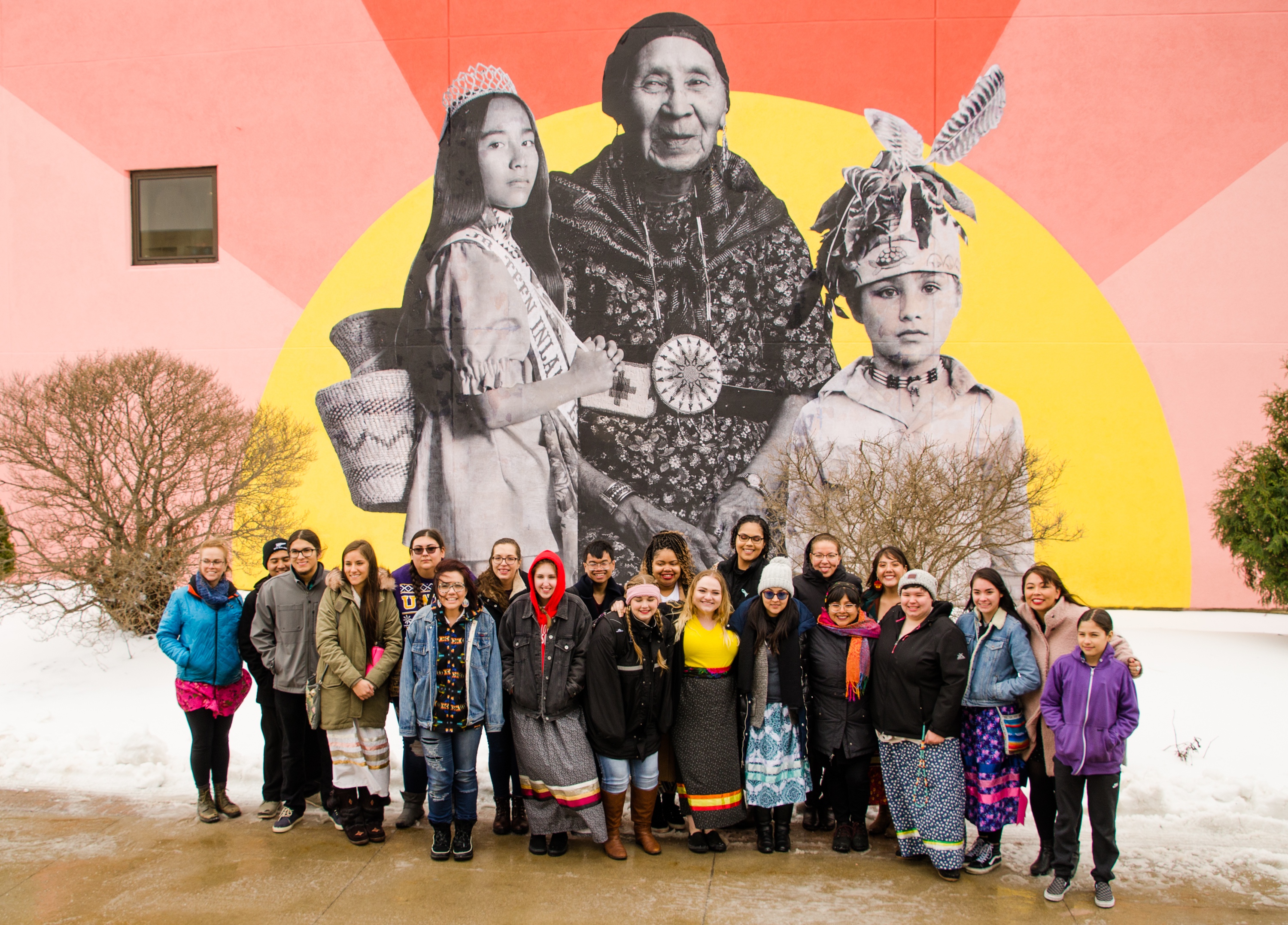 Members of Lawrence University Native Americans, University of Wisconsin-Green Bay students and Matika Wilbur’s artistic team in front of the mural that the group created over the course of the week of Apr. 5 to Apr. 11.

Matika Wilbur, a photographer and visual storyteller from the Swinomish and Tulalip peoples of coastal Washington, was the fourth speaker for the 2018-19 Convocation Series. Wilbur’s presentation, “Changing the Way We See Native America,” was held in Lawrence Memorial Chapel at 11:10 a.m. on Thursday, Apr. 11. The convocation marked the end of a week-long collaboration between Lawrence students and Wilbur on a new on-campus mural.

Associate Professor of Music Brigetta Miller described Wilbur’s Project 562: “It is a multi-year national photography project dedicated to photographing over 562 federally recognized tribes in the United States, resulting in an unprecedented repository of imagery and oral histories that accurately portrays contemporary Native Americans.”

An Oneida drum and dance group performed “Str8t Across” for 15 minutes at the beginning of the convocation. Then, Dennis Kenote, chairman of the Menominee Nation and the Language and Culture Commission, gave a talk both in English and in his native tongue that he was taught by his elders.

In President Mark Burstein’s welcome, he thanked Wilbur for coming back to Lawrence and engaging with students both at Lawrence and at University of Wisconsin-Green Bay (UWGB). Burstein addressed LU’s Appleton and Door County campuses, both of which are located on the ancestral homelands of the Menominee Nation; more information about the Land Acknowledgement can be found on the LU website. Traditional Native American flute music was played by a Menominee flutist after the welcome.

Students from Lawrence University Native American Organization (LUNA) and UWGB have worked closely in the past weeks with Wilbur creating a mural on campus. Miller introduced the speaker and expressed deep gratitude to those students: “Matika has a magical way of giving our Native students and their allies permission to acknowledge and be proud of their own cultural traditions, families and indigenous ways of knowing, even in spaces that may not have been historically designed for us.” She also reflected on working with Wilbur, saying, “This work is more than making art for the sake of social justice. It’s a way to truthfully show who we are. It’s a way for us to tell our own story.”

Wilbur is proud of Lawrence for making this huge step in the direction of having indigenous representation on college campuses. Six years ago, she sold everything in her apartment and created Project 562. Initially, her plan was to photograph people from over 562 tribal communities in the U.S., but she will travel to over 900 by the time the project is finished.

Wilbur cited her main goal for Project 562, asking, “Can we change the way that we see Native America?” She believes it is possible that U.S. citizens’ stereotypes of Native America can be changed by an updated curriculum. She began entertaining this idea while teaching at a tribal school in 2009, realizing that “our core curriculum does not cultivate our indigenous intelligence.” She continued, “The American dream didn’t include us. When Lincoln said, ‘For the people,’ he didn’t mean Native American people.”

Since November 2012, Wilbur has visited 400 tribes, and she will have six more months to finish her project. She told the audience at the convocation that she hopes they will think about kinship when they think about Native American people. She then asked them to say, “I am on indigenous land, we are on indigenous land.” The question, “What does it mean to be an indigenous people?” is hard to answer, but “Where are the indigenous lands?” is not; Wilbur explained this is because “identity is inextricably connected to the land.”

John Keikiala A’ana and his families from the Kanaka Maoli Nation of Hawaii have farmed kalo (taro) for several generations. Kalo is an important food that contains high protein and has significant meaning for Kanaka Maoli. In 2002, the University of Hawaii genetically modified kalo and patented their hybridized taro, charging farmers for the new breed of seed. Many Native American people protested for six years. As a result, in 2008 the state of Hawaii designated kalo as a state plant in a bill to ban genetically modified taro on the islands of Hawaii. Wilbur explained the significance of this, saying, “By developing a relationship with seeds, we began to heal ourselves from the inside out, because our ancestors have been developing that relationship with the land for so long.”

Another story told was about the movement at Standing Rock. The land being protected at Standing Rock holds the resting bones of the Sioux, Hidatsa, Mandan, Lakota, Nakota and Dakota people. Protestors were fighting against the fossil fuel industry’s digging up their ancestor’s bones.

Wilbur took photographs at the protest, and witnessed violence, dehumanization and wildness. “Those things can’t be unseen,” she said. “We are all accountable for demanding visibility of all people.”

When Wilbur was in India, she found out that Native  women are the most victimized in the nation. Three out of four have experienced sexual assault or abuse in their lifetimes. She said that we are at a critical time to change such terrible facts.

Jennie Parker, a teacher at tribal schools, experienced the crisis, overcoming it and creating a new narrative. She is the figure in the middle on the mural at Lawrence. Parker has been teaching native language for 25 years. Her daughter was terribly abused and passed away. Even though Parker had a bad heart attack after hearing that, she recovered because of her granddaughter’s support. Parker actively leads reforms to protect Native American women and children right now.

Dr. Mary Evelyn Belgarde is a retired professor of indigenous education from the University of New Mexico. She has helped establish several charter schools focused on indigenous education and has raised funds to support thousands of Native students. She is also well-versed in the history of boarding schools and government-engineered education systems of assimilation. Belgarde asked, “When are we going to stop asking our children to choose between cultural education and Western education?” She continued, “I think we are ready to stop the assimilation process. The time to change is now.”

Wilbur then showed a video about Native youth sharing their feelings about current education and how they often feel unsupported in their communities and within the American education system. She also shared her experience working on a study called “Reclaiming Native Truth.” Researchers went to universities all over the U.S. to investigate how young Americans perceive Native America. 84 percent of junior undergraduate students believed the Native American people to be extinct. 64 percent of those students believed that we all have equal opportunities.

In pursuit of changing the minds of students, Wilbur and others involved in this project created a six-week course to educate them. It turned out that none of the students changed their minds after the course. Another approach they tried was bringing different people together and letting them eat together. The result was positive and the students voted differently. Representation matters; 2018 was the first year in American history where two Native American women were elected to Congress.

The pathway to justice has its place in policy, but the relationships in our lives are also important. “Our relationship to land is what defines us,” Wilbur said. “Active decolonization is developing relationships with land, water and people who are different from us.” Despite the great losses experienced by indigenous people, Wilbur said that “we are living in a time of incredible spiritual and cultural resurrection.” She continued, “We can move beyond the sad stories of our past and begin creating a future together. We can build a dream together. We are allowed to dream.” Wilbur has been dreaming about a modern world that embraces its indigenity, and she invites all of us to help build that dream.

An informal Q&A session followed immediately after the convocation at the Buchanan Kiewit Wellness Center. The next convocation, “Education for Effective Action,” will be delivered by Professor of Psychology and Director of Inclusive Pedagogy David Burrows on Tuesday, May 21, at 11:10 a.m.

While the mural created by Wilbur, LUNA and UWGB was unable to set properly due to the inclement weather, the artistic team has plans to repair it in the coming weeks.