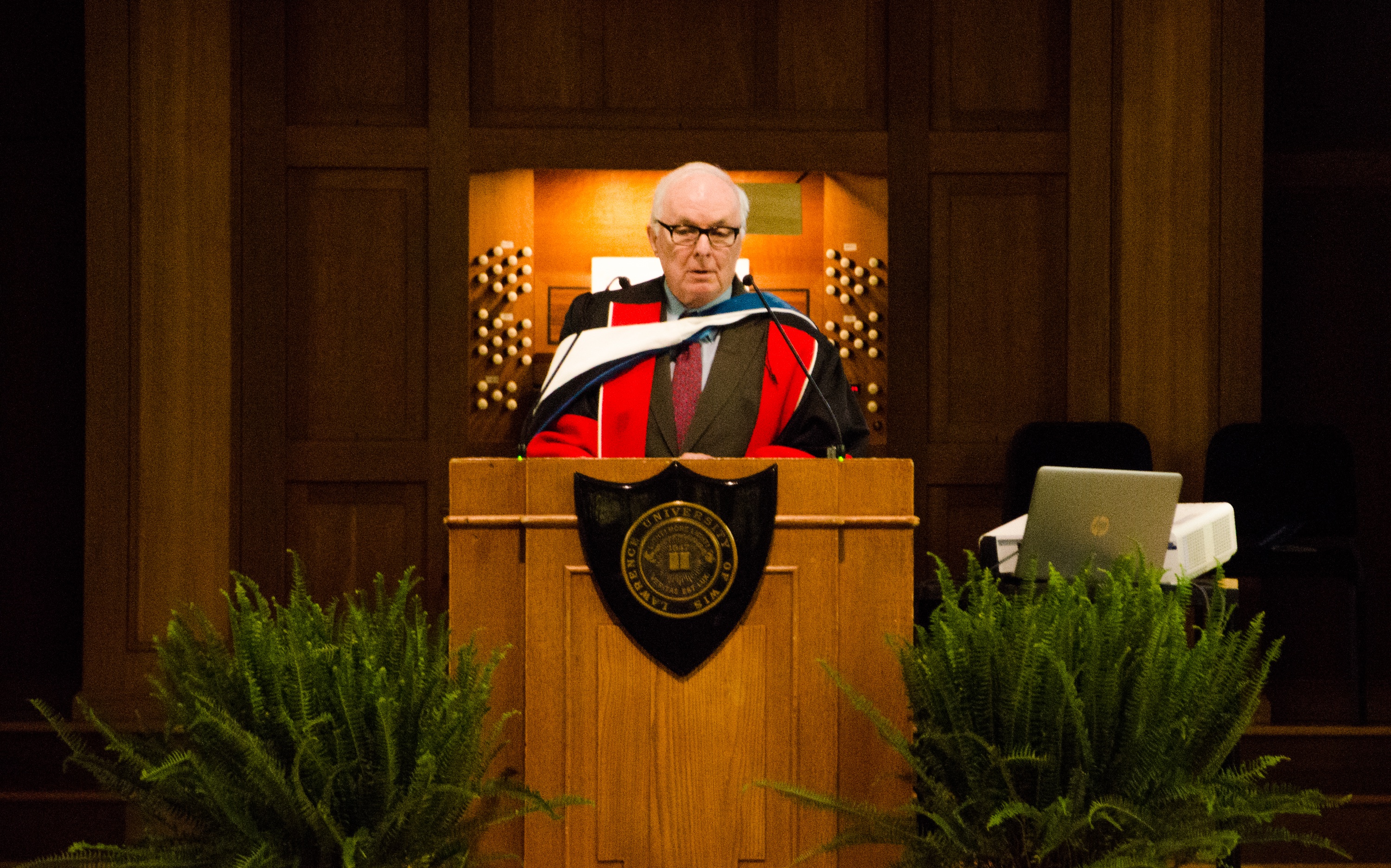 On Tuesday, May 21, the final convocation of the 2018-2019 academic year took place in Memorial Chapel. Professor of Psychology and Director of Inclusive Pedagogy David Burrows delivered his talk titled “Education for Effective Action.”

Burrows is the 10th recipient of Lawrence’s Faculty Convocation Award, which is presented by members of the faculty to a colleague in recognition of scholarly or creative work of great merit. Students, faculty and staff who had received other awards or prizes were also recognized prior to his talk.

The Honors Convocation began at 11:10 a.m. with the procession of the faculty. University Organist Kathrine Handford was joined by members of Associate Professor of Music John Daniel’s trumpet studio to play during the procession.

Following the procession of the faculty, President Mark Burstein read the Lawrence University Land Acknowledgement. President Burstein then recognized all of the students, faculty and staff who had received honors. On Monday, May 20, President Burstein hosted the Honors Ceremony in which 106 students and five faculty members were honored. During the Honors Convocation, members of honors societies joined the recipients in the front rows of the Chapel to be recognized.

In addition to these recipients, students who were elected to honor societies on campus such as Lambda Sigma, Mortar Board, Phi Beta Kappa and Pi Kappa Lambda were also recognized. President Burstein thanked all of the recipients for their leadership as well as their accomplishments.

Following the acknowledgement of the awards and prizes, seniors Joan Shalit and Christian Vallery performed the first movement of Sergei Prokofiev’s “Violin Sonata No. 2 in D Major.”

Provost and Dean of the Faculty Catherine Kodat introduced Burrows and discussed how he was a model for her in the provost position, as Burrows was provost of Lawrence before Kodat. She continued to discuss Burrows’ work and his ambitions to “provide opportunities for all students to succeed, which is the definition of inclusive pedagogy.”

Through Burrows’ talk, he dove into his ideas of inclusive pedagogy and the importance of liberal education. His talk, though, began with a piece of advice: “You can coast, but you will get there faster if you pedal.”

Burrows was not sure if he wanted to “go big” with his talk by questioning “the ultimate question…of life, the universe and everything” like in “The Hitchhiker’s Guide to the Galaxy” by Douglas Adams.

Burrows also debated going “small but deep” and pulled up charts of his own research to illustrate his point. However, he decided to target modest thought and discuss how we can make liberal education effective and sustainable.

Burrows went on to discuss two big ideas, as he called them. The first emphasized the important transition from thought into effective action. Burrows spoke of the necessity of action along with deep thinking.

His second big idea emphasized the enhancement of human characteristics through abstract thought, goals, relationships and language. By turning to the history of liberal education within Plato’s “Republic,” Burrows discussed how learning has been seen as the development of soul and mind and how education was for civic virtue, not solely personal achievement.

Burrows discussed possible solutions to further the development of his big plans, which he explained were truly only extending liberal education further. The first step, he explained, was making sure that every student could reach their full potential.

This could be done with even more individualized student planning, paired courses to emphasize connections and by further encouraging growth mindsets in students. Learning by presenting was another idea that Burrows suggested in order to show the importance of communication skills.

In regard to criticism of liberal education, Burrows informed the audience that Chief Executive Officers (CEOs) look for “curiosity, collaboration and a…drive to accomplish something great.” Burrows concluded by discussing the importance of education as a whole and how it seeks to help people enjoy wonders, improve social interactions and help people pedal through their lives rather than just coasting.