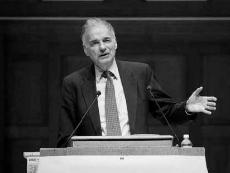 The culmination of Earth Week brought attorney, activist, author and three-time Presidential nominee Ralph Nader to campus. He gave a lecture titled “Environmentalism Over Corporatism” Sunday, April 25, which filled the chapel with members of the Lawrence and Fox
Valley communities. Greenfire and the Class of 1965 Student Activities Grant sponsored the event.
Nader is widely known for his political efforts for a truly democratic government, consumer
protection, environmentalism and humanitarianism and has been involved in numerous legislative bills and organized dozens of nonprofit
groups.
Additionally, Nader has been instrumental in creating several government agencies, including the Environmental Protection Agency,Occupational Safety and Health Administration and the Consumer Product Safety Administration. He also is responsible for creating Public Interest Research Groups.
Nader attended Princeton University and Harvard Law School. He has been devoted to civic action since 1965, when he helped pass motor vehicle safety legislation after his book “Unsafe
at Any Speed” exposed the automobile industry’s unwillingness to produce adequate safety measures in vehicles.
Nader has been active in a wide variety of civic campaigns since and has led legislation for acts including the Safe Drinking Water
Act, Meat and Poultry Inspection Act, Air and Water Pollution Control laws and the Freedom of
Information Act.
Nader ran once for the presidency as a Green Party candidate in 2000 and twice as an independent candidate in 2004 and 2008. He has not yet decided if he wants to run again in 2012.
Greenfire President Patrick Miner worked with Nader during his campaign in the last election
and led the efforts to bring him to Lawrence this year. In the summer of 2008 Miner gathered signatures to put Nader on the presidential
ballot in several states, and that fall he took the position in Nader’s headquarters as the National College Coordinator.
“When I was working in his office I got to know him and really admired his work ethic and all
the things he’s done in the last 40 years,” Miner said. “I think it will be a really good opportunity for students at Lawrence to see this
influential figure in American history and to be inspired by his talk.”
Miner became interested in working on Nader’s campaign because he feels it is the duty of every citizen to become what Nader calls a civic citizen, which Miner explained as “each person doing something to be more involved in their day-to-day government, and be more involved in how their country is run.”
“I wasn’t interested in supporting the Democratic candidate or the Republican candidate because I don’t agree with some of their policies, especially on the environmental
side of policy,” Miner said. “I’ve always been interested in what Nader has to say, so that’s
what got me interested in working on [his campaign]. I don’t plan on working in politics; I just thought it would be an interesting experience.”
“I think [Nader’s talk] is applicable to everyone,” Miner observed. “It’s an event that can bring together a lot of people and get things rolling. We have a lot of environmental
initiatives right now on campus and other initiatives that are equally important that might be spurred on by his talk.”
Nader discussed how corporations, especially Wall Street corporations, are corrupting the
American government. He also spoke about his own experiences as an activist and gave advice as to how Lawrentians should play a role in political activism.
Additionally, Nader urged students to not waste their youth. He called Lawrentians to civic action, suggesting they become leaders rather than consenting to be followers for the rest of their lives. “Your twenties are arguably
your most creative decade,” Nader said. “This is the decade when you develop your trajectory of what you’re going to do in your life.”
Nader asked Lawrence students to make a difference in the community by fighting for what
they believe in.
“Students ought to stand on the shoulders of their predecessors and become active in the
pressing issues of the day,” Nader remarked. 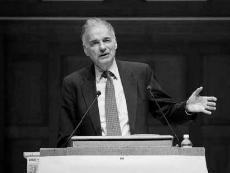