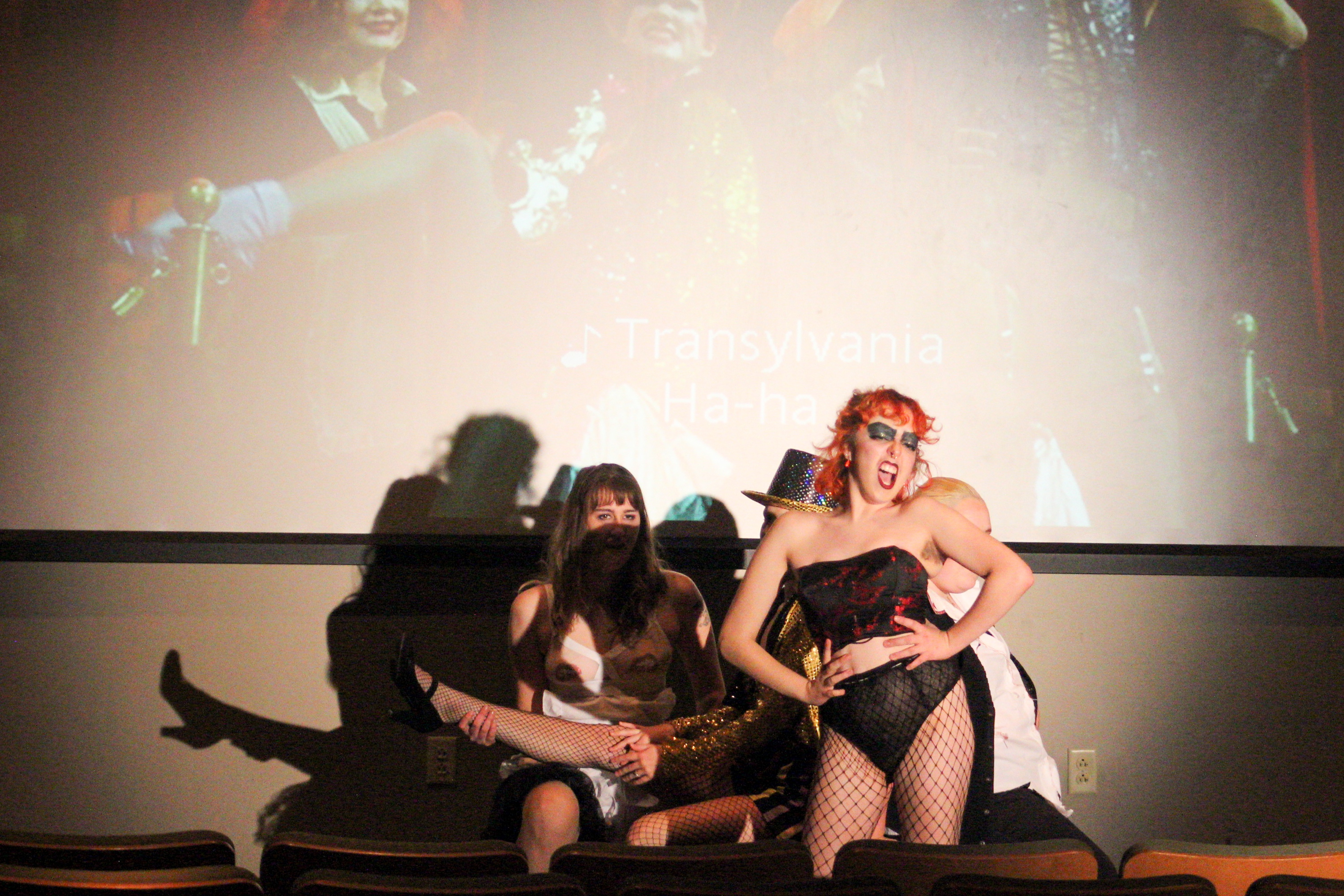 In the Warch Campus Center cinema early Saturday morning and late Saturday night, Nov. 2, Lawrence University screened and put on a production of “The Rocky Horror Picture Show” in a wild and rambunctious night. For those uninformed, “The Rocky Horror Picture Show,” or “Rocky,” is a movie that came out in 1975 starring Tim Curry and created by Richard O’Brien, who would later go on to voice act in the animated Disney show “Phineas and Ferb.” However, despite these credentials, the movie is widely regarded as horrible. Terrible pacing, bad acting, cheesy dialogue and bad songs plague the film. As such, people began to just start yelling at the screen to make it more enjoyable and making fun of its absolutely ridiculous nature. Through this, the “Rocky” live show was born. Now, over 40 years later, it has become a kind of cult where a shadow cast acts out the movie in front of the screen and shouts various canonical “call lines” where the audience shouts at the movie to very amusing affect.

Lawrence now hosts an annual production where the movie is screened and it conducts the shadow cast over “Halloweekend” every year. This time it was directed by juniors Mary-Grace Wagner, Sofie Schwartz and Zoe Adler, and starred junior Robin Teske as Janet and sophomores Olivia VanSlyke as Brad and Karin Hannerman as Frank-n-Furter. There were a dozen others in named roles and as “sextras,” who help yell call lines and fill out the cast where the scenes contain large crowds. The Saturday morning show at 12:01 a.m. held a full house with large crowds of people dressed up for the occasion. Part of the culture behind “Rocky” is letting go and expressing yourself. As such, many people dressed in drag, wore lingerie or other provocative outfits. And yet, not once did any of it seem out of place. In fact, those that seemed out of place were the ones dressed “normally,” and that was extremely refreshing for a place to just be that accepting of letting go and pushing your comfort zone in the best way possible.

The Lawrentian sat down with Schawrtz, who was able to give some insight into the production. Our first question was about how much work went into the show. At first glance, because it is a shadow cast, it could easily be dismissed as to how much effort the cast put in. However, according to Schwartz, it poses many unique challenges and the time put in was great. They rehearsed from 7 p.m. to 10 p.m. every Monday, Wednesday and Friday since second week. Some of their choreography was quite intricate, and the production used the makeup of the theater to their advantage. However, their biggest problem, Schwartz said, was that “since it is completely student run, it is difficult to get the credibility that comes with other performances on campus. Our goal as directors has been to rebrand ‘Rocky’ to more than just students messing around.”

And it does show. The show was extremely well put together, with lighting, makeup and call line timing being, at least from an audience member’s perspective, dead on. This is, in part, due to this year’s cast getting along really well, according to Schwartz. It was a much larger cast with about ten “sextras” compared to last year’s three. But everyone was just clicking. Every week they would do a “Rocky” dinner and she hopes to continue that into the coming terms.

Overall, it was an extremely enjoyable show and the amount of detail that went into all of the choreography, costumes and acting was impressive to say the least. Anyone looking to participate next year need only look out for the auditions. For those interested in going to this highly recommended experience, it will be put on next year around Oct. 31.