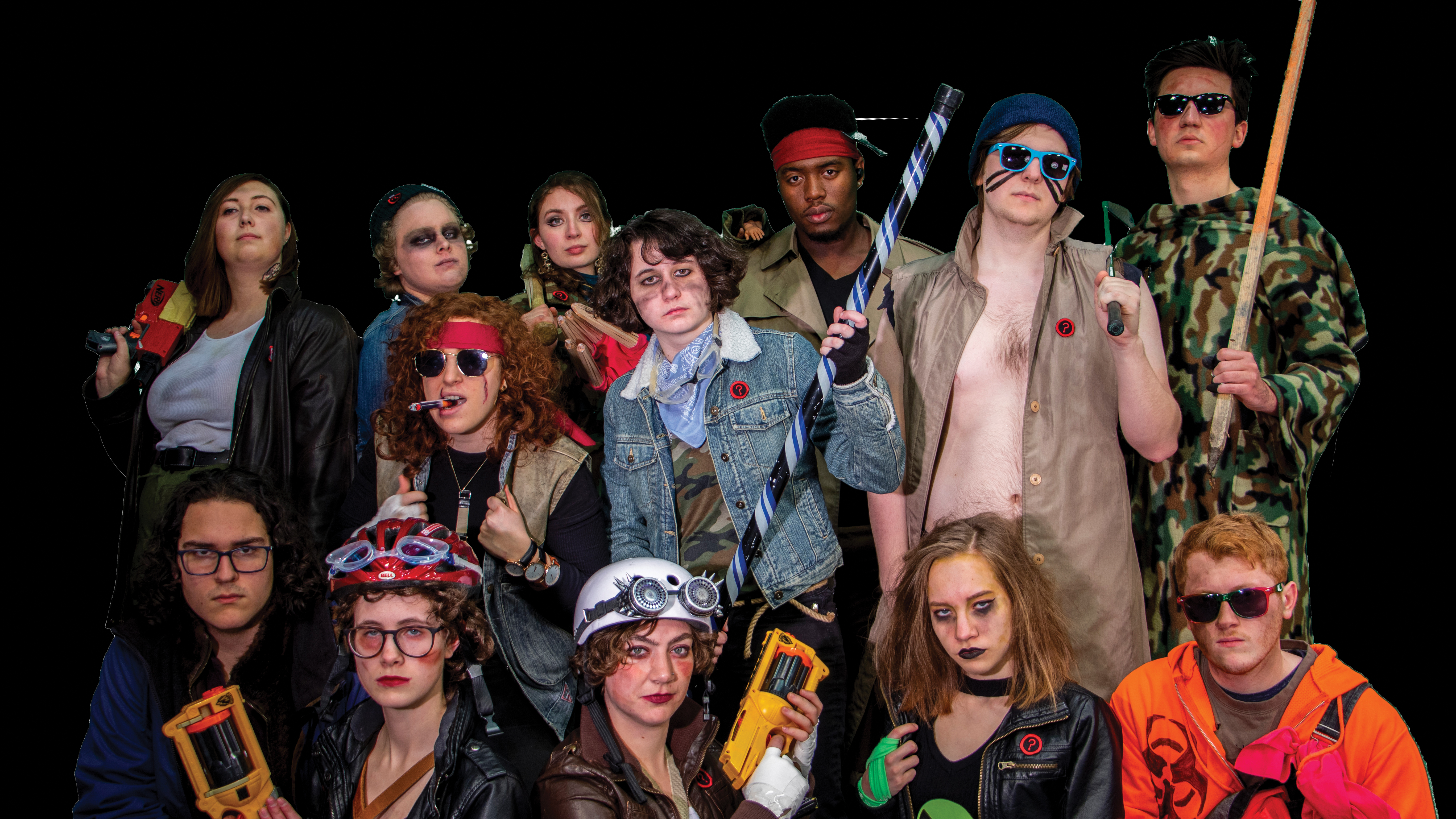 The promotional photos for trivia this year featured a post-apocalyptic theme.

This year marked the 55th year of the Annual Great Midwest Trivia Contest at Lawrence University. Fifty consecutive hours of trivia began at 10:00:37 p.m. on Friday, Jan. 24, with President Mark Burstein reading the first question. The contest concluded at midnight on Sunday, Jan. 26.

Ever since its beginning in 1966, the contest has been aired on Lawrence’s student station: WLFM. Participants crowd around laptops and speakers to listen to the questions available on the digital broadcast.

These questions were created and delivered by a team of Trivia Masters, students who auditioned in spring to organize the contest. The Trivia Masters (TMs) are led by one Head Master (HM), and this year’s HM was senior Allegra Taylor. Taylor and her crew of TMs delivered over 400 questions this past weekend.

Questions for the Great Midwest Trivia Contest are definitely not like questions involved in standard games of trivia; instead, these questions are extremely obscure and generally multi-faceted.

One such question was, “At the address of 1109 Margaret Street in St. Paul, MN, one can find a location sharing the name with the author of a bean-related book. According to that book, what is the only way in which dolphins are not superior to humans?”

This question was featured during one of the theme hours that the TMs concocted. Theme hours involved questions revolving around a specific topic, such as beans. Also, if you were wondering, the answer to the aforementioned question was that dolphins do not have beanbags, hence why it was included in the bean themed hour.

Teams were given three minutes and allowed any means necessary to find the answer to each question. Once a team stumbled upon what they hoped was the correct answer, they then called in to report their answer. Each call was allowed three guesses, but teams could continue calling since they did not have to identify their team name until they answered correctly.

On the other end of the phone, TMs as well as volunteers would then tell them if they were correct. These volunteers included members of the greater trivia community from off-campus teams as well as Lawrence students. Teams were awarded bonus points if members of their team volunteered to assist with answering phones.

In order to answer phones, volunteers needed to be prepared to respond to seemingly absurd answers and also to dive over people in order to answer the multitude of phones that generally all rang at the same time. One volunteer, sophomore Rita Murphy, admitted that they had only been assisting for an hour and had already felt as if they had been changed as person from the experience.

Other than answering questions and sending volunteers, teams could also earn additional points by completing action challenges. These could be found in cannisters hidden around campus or delivered over the air to all teams. One such action question included making a swamp and recreating the famous Shrek line: “What are you doing in my swamp?”

During the final hour of Trivia on Sunday, the questions increased drastically in intensity. These nearly impossible questions are referred to as “Garudas.” Teams are allowed fifteen minutes to answer these questions.

When calling in to answer the Garudas, teams needed to identify their team name prior to answering, which meant that they were actually only allowed three guesses for these. The final question is even more intense, though, and is referred to as the Super Garuda.

Teams are allowed thirty minutes to desperately search for the answer to the Super Garuda. This final question is then used as the first question for the next year of Trivia, making it the longest running trivia contest due to its continuous nature.

After the answer to the Super Garuda was revealed, teams gathered outside of the Conservatory for a closing ceremony. Shortly after midnight on Sunday, the TMs sprinted to the steps of the Conservatory with Taylor leading the charge. After thanking participants, Taylor then read the winners and announced next year’s HM.

In first place for the on-campus teams was “Do You Really Trust an Aquarius? Baking and Cooking a can opener IS a peeler if you’re brave enough. What about a pizza peeler? And Sautéing and Broiling I’m sorry Jon and Flambéing and… OH.. oh GOD. The void the void the void – now THIS is pod racing and Freeze Drying and I didn’t mean to put wax paper in the oven. The scene of my death is incredibly bleak and frying a bird, wait. You still believe in bird? Ain’t nothin bad EVER happened on THIS bed and Roasting the ripped calf of the bourgeoisie man that you’ve made for dinner and Grilling him Club. The previous name has since been redacted; the current name now reads what I can only assume is the first name, but in Wingdings.”

In second place for the on-campus teams was “Nips 2020: A Harder Nip, A Brighter Future.” Third place was claimed by “The Team Formerly Known As.”

In second place for the off-campus teams was “Holy Broman Empire,” and third place was claimed by “The Rob Ford Resurrection Committee, crack from the dead.”

Although these names may seem absurd, they fit in with Trivia Culture — as some people call it. One tradition for Trivia includes having long team names that are often slightly reworded to be relevant to the specific question when the team name is read on air.

After announcing the winners, HM Taylor awarded the teams with prizes, including a bag of chips from Panera Bread and a leg from a baby doll found at the bottom of a lake. Taylor then dramatically passed her HM scepter to junior Grace Krueger. After a short acceptance speech, Krueger dismissed the teams and encouraged all of them to get some sleep.

The promotional photos for trivia this year featured a post-apocalyptic theme. Photo by Juan Felipe Ayala. This year marked the 55th year of the Annual Great Midwest Trivia Contest at Lawrence University. Fifty consecutive hours of trivia began at 10:00:37 p.m. on Friday, Jan. 24, with President Mark Burstein reading the first question. The contest…