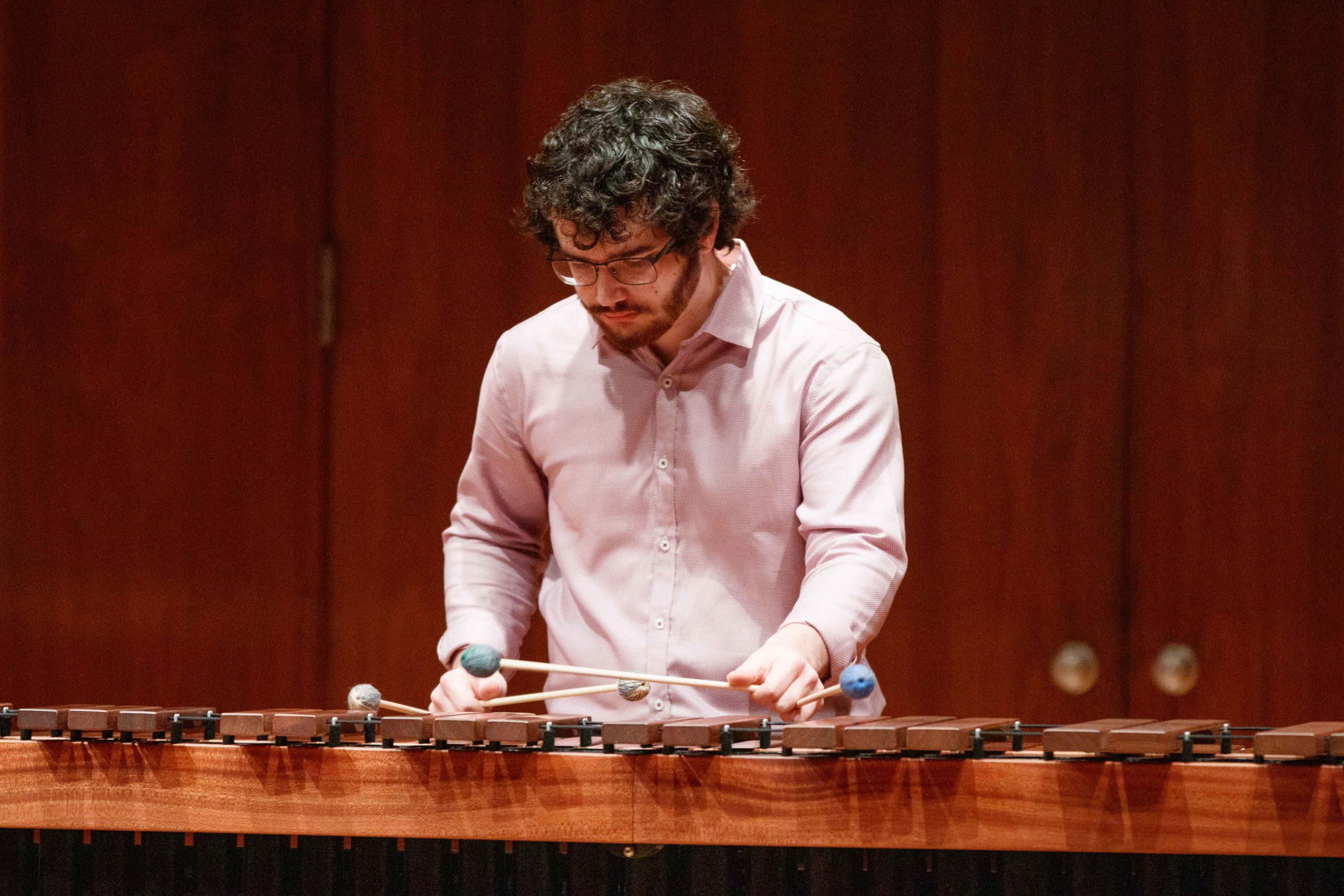 This past Saturday, Oct. 17, senior Spencer Bunch-Hotaling performed his student recital. It was a percussion performance with a wide range of instruments, all evoking strong emotional reactions from those watching. There were moments of peace and ambience during his performance accompanied by other times of high intensity and climax.

The opening songs were performed on a drum set and other traditional percussion instruments, which all rode high with intensity, pushing any listener to the edge of their seat. These songs brought on an intense emotional reaction and made hearts pound with the beat.

Bunch-Hotaling then moved to the xylophone to provide a more relaxing and melodic performance. The first couple songs after the instrument change were performed smoothly and made use of all parts of the xylophone, even the parts not traditionally thought of as musical.

Another song Bunch-Hotaling performed on the drums proved his expertise, as he was able to keep a steadfast beat while continually adding more and more elements of sound into the mix. At points during his performance, it seemed as though he was barely paying attention to keeping the beat while looking around and picking up different instruments to play.

Later in his performance, Bunch-Hotaling moved to the glockenspiel to provide a peaceful rendition of a song that required skill with not just one mallet per hand but two. In these songs, the harmonies did not seem conventional, but, on a deep listening level, it provided a beautiful combination of notes.

Another one of Bunch-Hotaling’s pieces on the xylophone was characterized by a progression of cascading notes that provided a moment of beauty in the chaos of midterms. Bunch-Hotaling’s performance exemplifies Lawrence students’ ability to make the best of a tough situation. Though it seems nearly impossible to put aside current events, Bunch-Hotaling was able to focus and not only put together a recital, but execute it with precision. He was committed to his musicianship and performed a flawless recital despite the lack of a room full of audience members.

It was truly a shame this performance could not be heard by people attending the live event. The beauty of the music Bunch-Hotaling performed was truly not done justice by a virtual livestream. That being said, Bunch-Hotaling still seemed more than happy to perform, proving his dedication to his recital and education in music.

Though tuning into a live stream of a student recital can easily put itself at the bottom of a long to-do list, it is more important now than ever to indulge in the arts. The Lawrence campus is lacking the joy of live music it usually sees, and these student recitals provide a little of the comfort so many students are missing out on this term. Bunch-Hotaling’s performance is available through the Lawrence Vimeo page and should be enjoyed by anyone looking for music in the sixth week blues.