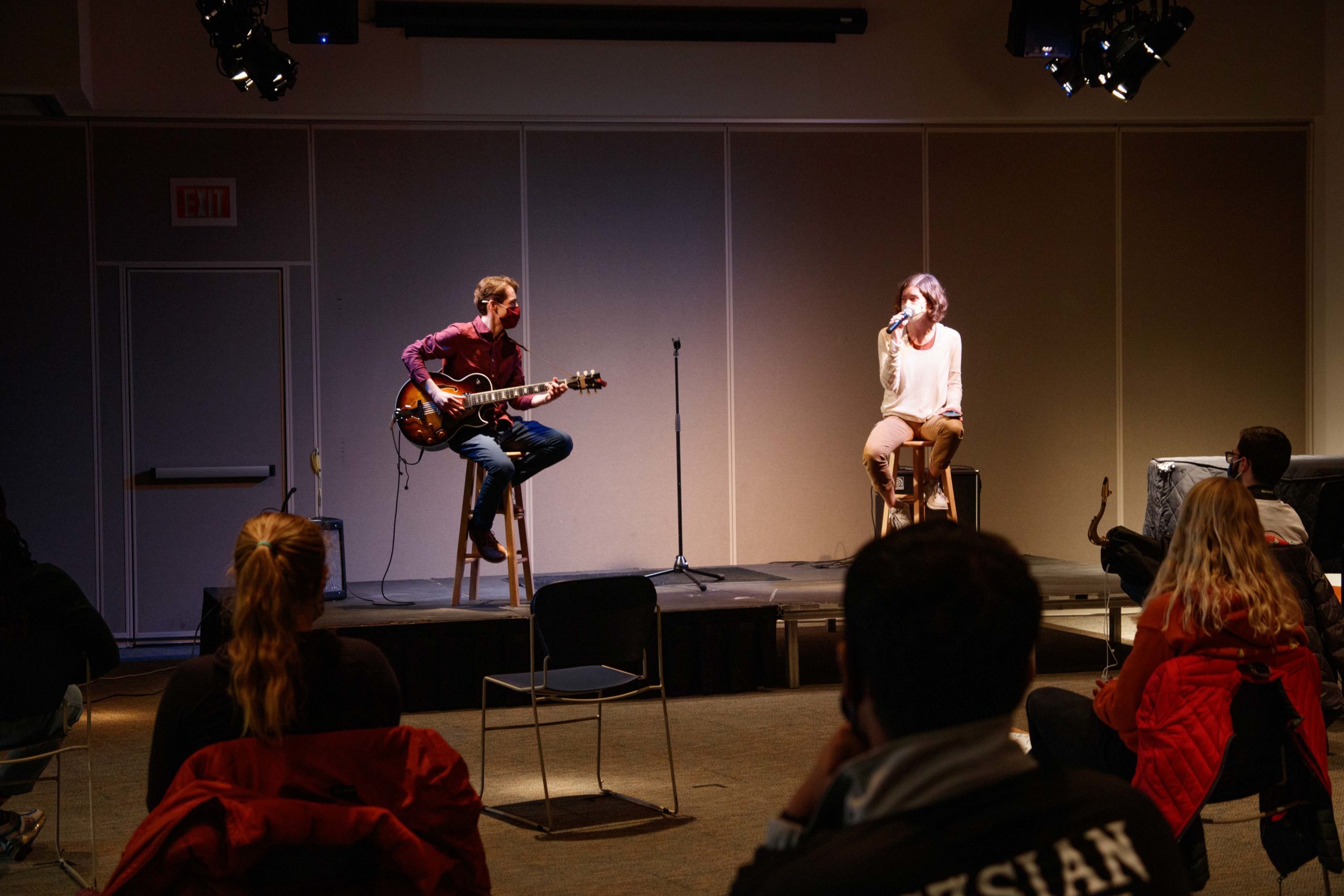 This past Friday, Jan. 29, Students of Lawrence (SOL) Studios held an open mic for Lawrence students to perform in front of a limited but lively audience. The student performances ranged from original instrumental pieces to covers of jazz songs.

From the beginning of the event, it was clear that everyone performing was not only excited to share their music, but also excited to play it for a live audience. The first performer, sophomore Tomi Oladunjoye, played instrumental tracks that he had produced prior to the open mic. Before his final song, he confided in the audience that he needed to play something “lit.” This song was titled “Misunderstood,” which featured a driving vocal melody alongside a pounding beat to give the song a propelling sense of movement.

The next performers were freshmen Linnea Morris and Jackson Peters. Morris sang while Peters accompanied on guitar for both of the songs they covered. The first song they played was a folk-style tune entitled “Freight Train,” originally written by Elizabeth Cotton.

A freshman who goes by the name Norcom was next up to perform. He performed an original song, which contained introspective lyrics backed by slow, haunting instrumentals. Norcom’s performance was just as relaxed as the song; he sat at ease on stage and just sang, centering the sound and lyrics of his music rather than an active show.

The leader of SOL Studios, fifth-year Daniel Green, went up in-between each of the performances to introduce the next student performer, as well as to make sure everyone got recognition for their hard work. This effort on Green’s part led the event to feel like an extremely inclusive environment for artists to showcase what they had been working on.

The next portion of the night was reserved for the bands on campus at Lawrence. The first band, unnamed as of yet, performed “In Bloom” by Nirvana. In the typical grunge fashion, the members accentuated the song’s range in volume, pitch and rhythm in their performance. They then moved on to a song that had more of a punk feel than grunge. They maintained the distinct heavy guitar found at the peaks of “In Bloom” throughout most of this song mixed with the screaming vocals more character in punk music.

The final group to perform threw jazz into the already diverse mix of music genres. This performance incorporated piano, bass guitar, guitar and a drum set — all listening to and playing off one another. Each instrument would have been great alone, but together they meshed into one cohesive sound. The players each had their own time to solo, yet no instrument ever faded into the background. Even when it was the guitarist’s turn to take the lead, all the other instruments supported its rhythm and allowed it to highlight the part in the song.

The SOL Studios open mic provided students with a chance to perform in front of a live audience, which was well-received by performers and audience members alike. Live music during a pandemic may seem hard to achieve without being exclusionary, but SOL Studios maintained a welcoming environment in which Lawrence students were able to express and work upon live reactions to their music.