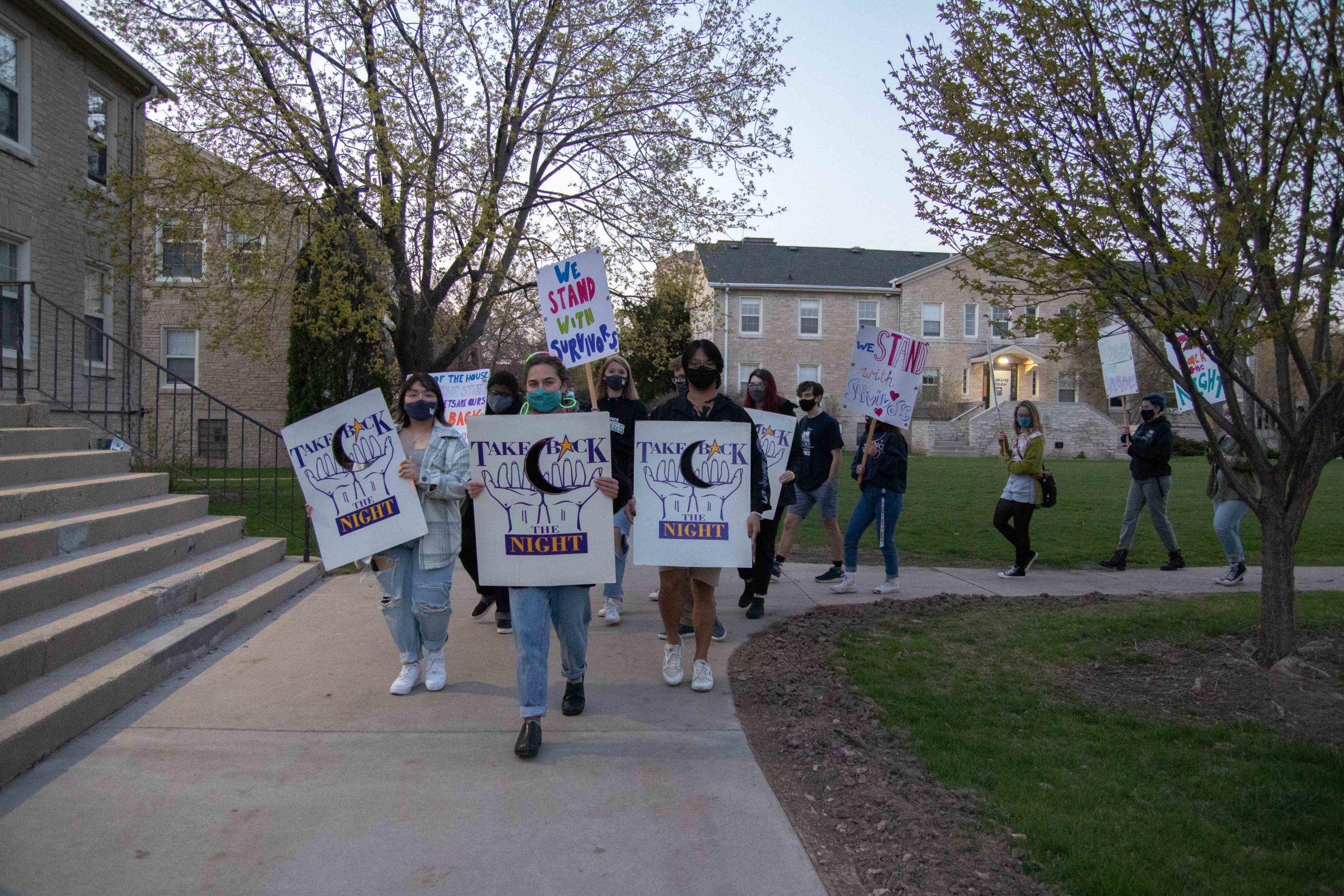 Students march on the Quad as part of SAASHA’s “March for Awareness” on April 22. Photo by Pei Robins.

Throughout the month of April, Lawrence’s Student Alliance Against Sexual Harassment and Assault (SAASHA) organized events to promote sexual assault awareness on campus.

SAASHA is a committee within the Lawrence University Community Council (LUCC). They are committed to ending sexual violence and misconduct of any kind on campus. They also bring attention to sexual assault by facilitating discussions, giving students resources to reach out to those in need and teaching members of the Lawrence community about sexual assault awareness.

A weeklong event this month for SAASHA called “Take Back the Night Week” (TBTN) started Monday, April 19, and continued until Friday, April 23. TBTN is a new event organized by SAASHA, explained chair member junior Fannie Vazquez, an active member of SAASHA since her freshman year.

Vazquez and SAASHA began to plan TBTN during Winter Term to create a week full of fun activities and educational opportunities to spread awareness.  SAASHA hosted an event in a different location and format each night. The overall goal for TBTN was to provide survivors with a safe space and the opportunity to take back the spots on campus that they didn’t feel safe in before.

Monday night was a Zoom meeting on bystander training and Title IX, which is a civil rights law that protects people from discrimination based on their sex. Tuesday featured a screening of the film, “Ladybird,” selected for its storyline about a teenage girl going through both personal and family relationships while dealing with the concepts of sex and virginity. An art fair was hosted on Wednesday in the Somerset Room of the Warch Campus Center, where students could come to learn about SAASHA, make art and see others’ creations. On Thursday, a “March of Awareness’’ was hosted at the Wriston Amphitheater.

Vazquez emphasized the particular importance of the march as compared to the other events. Both survivors and supporters met at the Wriston Amphitheater and walked all around campus. “As it got darker, our glow sticks shone and lit up more and provided that space of security,” Vazquez said. “We didn’t do any chants or phrases because it wasn’t really a protest. Survivors deserve to feel safe and everyone that joined in the march was there to walk together and support one another.”

Vazquez said that Friday night’s event, which was held on the second floor of Sabin House, was a night for students to heal and reflect on the past week. Goodie bags were handed out to students, and a counselor was available for support.

“TBTN week was a way to let the student body know that SAASHA and fellow students hear and support survivors no matter what and that we’ll always be looking out for each other,” SAASHA Freshman Class Representative Lucie Pelter stated. “As long as that message is reached for somebody who needed to hear that, I would call it a success.”

SAASHA’s plan for the near future is to continue to spread awareness, and Vazquez hopes to host another event before Spring Term is over.