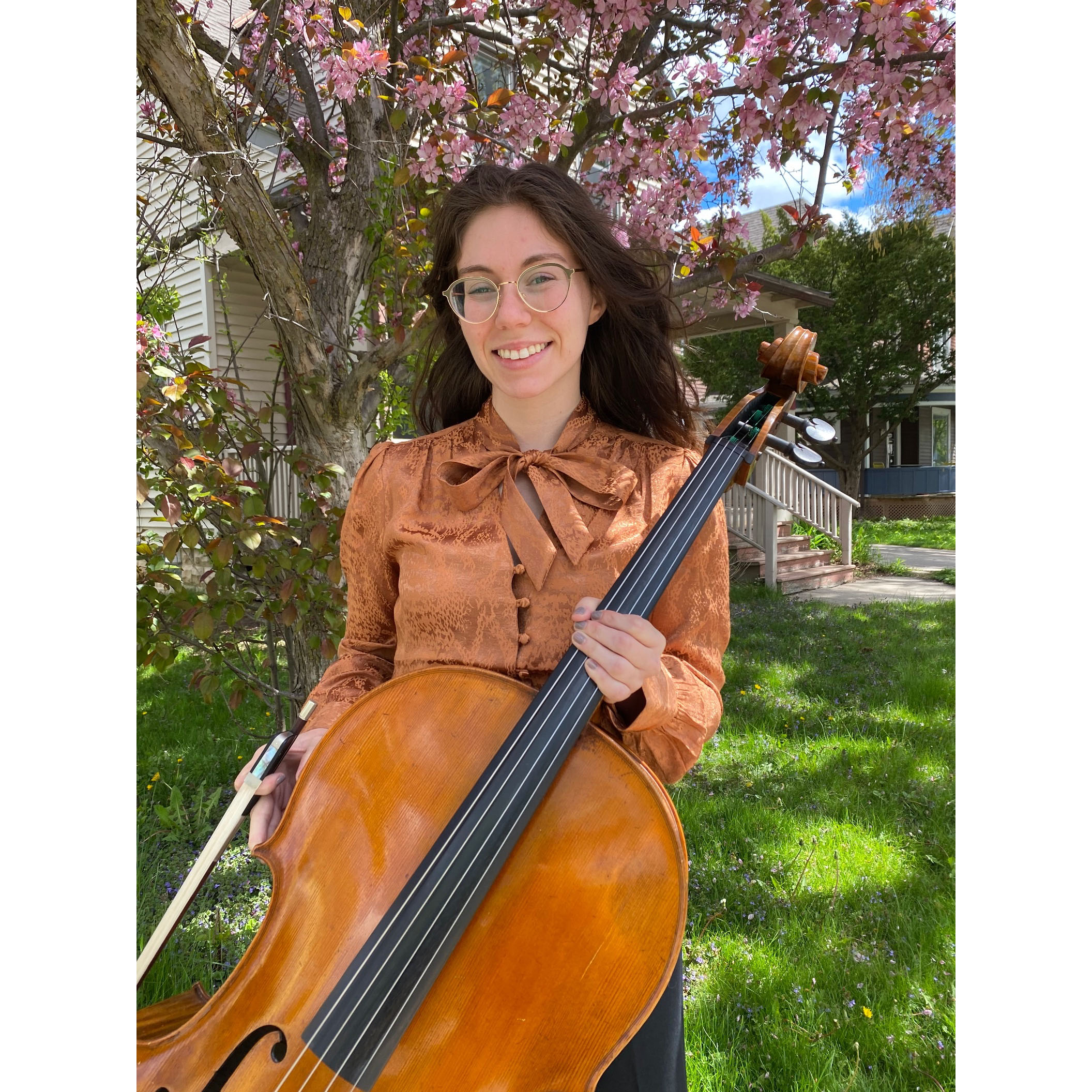 Senior Hannah Baron performed her recital on Monday, May 10 in Harper Hall.

Like many other Lawrence Conservatory students in March 2020, Hannah Baron was preparing for her upcoming recital during the spring term when the COVID-19 pandemic upended her plans. Having been sent home, Baron chose to put her recital on hold until she could return to campus to perform. Thankfully, during the next three terms of online classes, she completed some of the remaining requirements for her music education degree and was able to devote extra time to practicing her cello to build a new program from the ground up. Baron’s tenacious preparation culminated in her in-person recital in Harper Hall on Monday, May 10.

In considering works for her reimagined program, Baron mainly selected music that would not require her to rehearse or perform with additional musicians. “I was really hoping to collaborate with many people for my senior recital,” Baron said, but unfortunately COVID-19 restrictions made working with other musicians more difficult. The program for her recital consisted of four pieces: Passacaglia by Heinrich Ignaz Franz Biber, Sonata No. 3 in G Major, G. 5 by Luigi Boccherini, Auguste Franchomme’s Caprice No. 9 in B minor and Passacaglia by William Walton. Fellow cellist sophomore Justin Collins joined Baron for Boccherini’s Sonata No. 3, but she performed the rest of the works unaccompanied. The selected works span four centuries and a variety of style periods, so Baron chose to play each work chronologically based on the order they were composed, starting with the oldest and ending with the most recent pieces. The sequential nature of the program served to, in Baron’s words, “walk the audience through different eras of music and let them hear how they developed and changed.”

The recital’s title, Bookends derives its name from the recital closing out her school career and the program starting and ending with two passacaglias—a centuries-old dance form originating in Spain. Despite their shared title, the first and last works are entirely different treatments of the passacaglia idiom. While Biber’s Passacaglia takes a four-chord progression and generates increasingly elaborate variations on the material, Walton’s more modern Passacaglia stretched the boundaries of the form, incorporating a dizzying array of meters and unconventional harmonies. Walton’s piece was an apt choice to end the recital, concluding with a ferocious onslaught of double stops, two notes played simultaneously that brought the energy to a resounding climax.

The middle two works on the program provided additional stylistic contrasts with the two passacaglias. Sonata No. 3 by Luigi Boccherini was the only multi-movement work on the program, and the only time Baron was joined on stage by other musicians. Throughout the three movements, Baron took the lead on the ornamented, Mozartian melodies while Justin Collins provided a steady, humble accompaniment. The duo particularly seemed to enjoy performing the second movement, “Allegro alla militaire,” which involved a light and bouncy march feel that made it an audience favorite. Following the close of Boccherini’s piece, Baron returned to solo works, performing Franchomme’s Caprice No. 9 in B minor. This lyrical piece gave Baron a chance to show off her memorization skills. Memorizing a piece of music is a challenge under any circumstances, but learning this piece was especially impressive because of the intense technical demands. Baron stated that she felt performing this piece was a significant moment in her playing career because her level of preparation allowed her to deliver the most expressive and authentic performance possible.