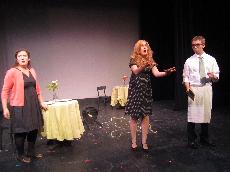 Students showcased a series of new plays last Saturday night as part of another 24-Hour Play Festival, organized collaboratively by AM Theatre and the Lawrence Society of Drama. The student-run festival featured five plays, all written and rehearsed within the span of 24 hours.
Participants gathered at 8 p.m. Friday night at Theater House for a short meeting, and immediately afterwards seven students began writing short scripts – with a 3 a.m. deadline.
Five directors then read through the pieces in Cloak Theater Saturday at 7 a.m. An hour later, 21 actors arrived and rehearsed the five plays for the entirety of the morning and afternoon.
By 8 p.m. Saturday night, the Playfest team had successfully prepared five new shows – a daunting task that could not have been completed without the efforts of the festival’s three talented producers, Andi Rudd, Zach Garcia and Alex Kohnstamm.
The five shows, despite their differences, contained one common thread: Each play featured characters that either spoke to or directly acknowledged the audience.
Andrew Knoedler’s “In Memoriam” actually addressed this issue of audience involvement outright. His characters openly debated the necessity of a “fourth wall,” grappling with the presence of their audience. Knoedler’s witty play, directed by J.R. Vanko, really benefited from strong performances by its entire cast, especially Hannah Sweet.
Rudd and Kohnstamm’s “Into the Motherland,” a parody of Lawrence’s upcoming department musical “Into the Woods,” stood out as particularly hilarious. In the opening musical number, the narrator announced, “The Czar is having a vodkafest!” while other characters cursed Russia’s bitter climate: “I wish! I wish I wasn’t so cold!”
The piece also alluded to several other well-known stories, including “Alice in Wonderland” and “Willy Wonka and the Chocolate Factory.”
Other notable moments included Katy Harth’s portrayal of an inebriated White Rabbit, Madeline Bunke’s unique take on Disney’s Mulan and Micah Price’s performance as a cigar-smoking dragon – a subtle reference to the Homestar Runner website.
Erika Theide, who played Alice, brought down the house after an apparent misreading of the script broke her focus.
Last weekend’s festival reintroduced many of the same charming antics commonly associated with past 24-Hour Play Festivals. Once again, the program contained a set of silly bios written by the participants themselves.
Also, each actor brought a random item to the Friday meeting as a potential prop for one or more of the shows. Playwrights and directors creatively incorporated many of these props into their plays. Items that made final cut included a pair of bunny slippers, an empty tequila bottle and a canoe paddle.
Along with encouraging students to get in touch with their goofy sides, the festival also provided participants with an opportunity to engage in a unique kind of theater: one characterized by spontaneity and creativity. 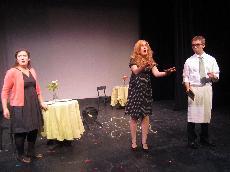