A new sculpture at Lawrence: Otāēciah 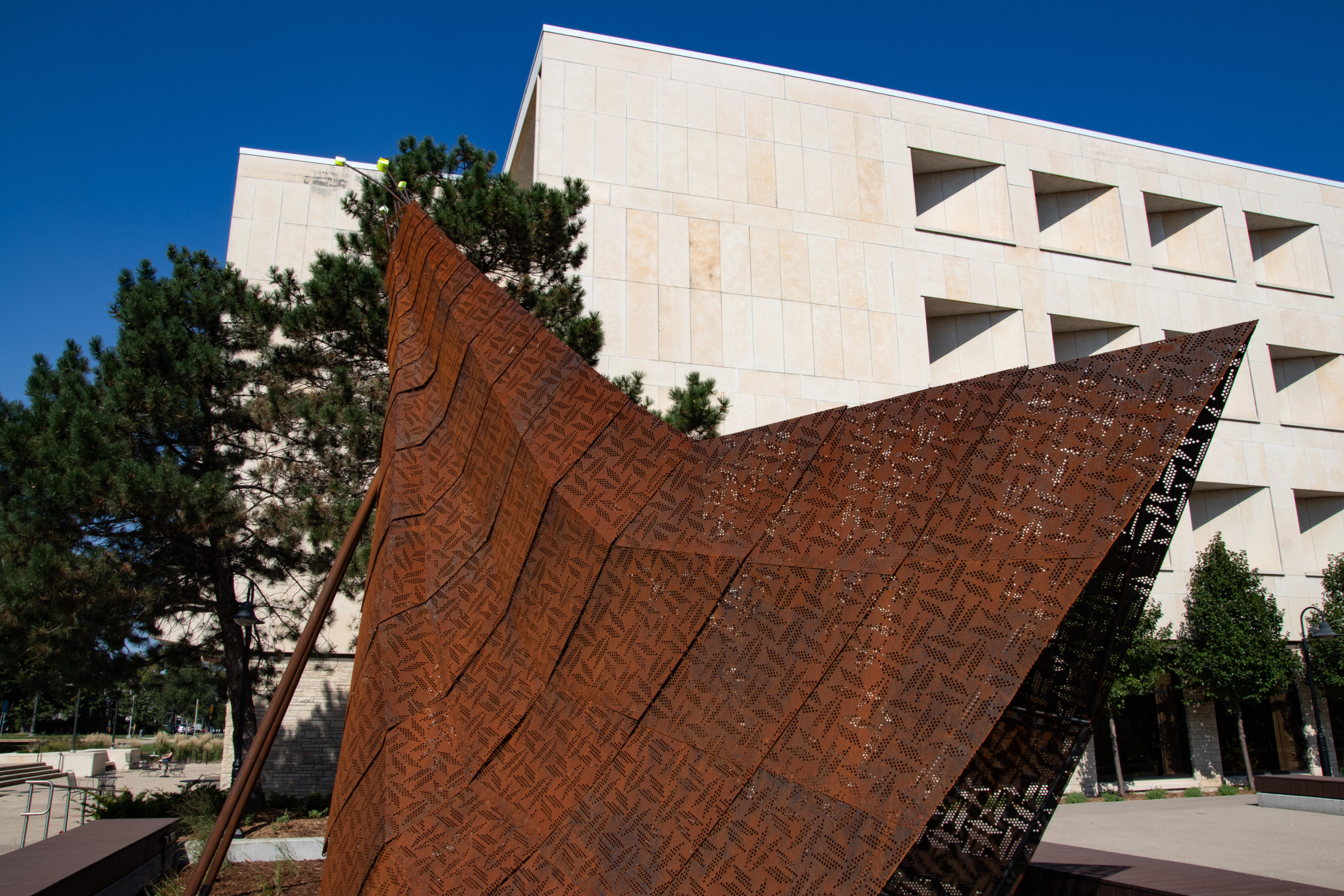 Lawrence University commisioned artist Chris T. Cornelius (Oneida) to create Otāēciah. The sculpture was installed this past summer and now stands on what will be named Kaeyes Mamaceqtawuk Plaza. Photo by Alana Melvin.

It’s hard to miss Otāēciah, the enormous steel sculpture that now rests between the Seeley G. Mudd Library and the Wriston Art Center. Constructed over the past summer months, the sculpture is quite the accomplishment, constructed almost completely from steel and measuring well over a story high. A beautiful orange-brown hue, its angular form stands out against the lighter shades of its environment. While it is spectacular, this new addition to campus is more than just a pretty decoration. Designed by artist and architect Chris T. Cornelius, the sculpture is part of a larger commitment by Lawrence University to recognize the homeland of Indigenous people that its campus was built on.

Cornelius, a citizen of the Indigenous Oneida Nation of Wisconsin and an associate professor of architecture at the University of Wisconsin-Milwaukee, was first contacted by Lawrence in late 2019, starting a year-long process of designing and installing the sculpture. Beth Zinsli, professor and curator at Wriston Art Center, who initially recommended Cornelius for the project, says she was drawn to his more “abstract, aesthetically pleasing and interesting” approach to his work. Cornelius is a highly decorated artist, having received many accolades and awards for both his work in sculpture and in architecture. Cornelius was unfortunately unavailable for comment.

The sculpture’s title is the Menominee word for “Crane,” one of the five traditional Menominee clan symbols. The form, too, represents a crane, its geometric steel paneling overlapping like a bird’s feathers. Within the steel paneling are textures based on woodland textile patterns and Menominee beadwork designs. The top of  Otāēciah points directly towards what is currently designated as the land of the Menominee Nation. The peak of the sculpture is decorated with colorful shapes, signifying ceremonial regalia. At the sculpture’s base are three sturdy posts, representing the motto of the student-run Lawrence University Native American organization (LUNA): “We stand together — stronger together.”

This isn’t the only step the University is taking to demonstrate its acknowledgement of the Menominee land it resides on, though. In addition to Otāēciah’s installation, the plaza between the two buildings is being given a new name: Kaeyes Mamaceqtawuk Plaza. “Kaeyes Mamaceqtawuk,” translating to “Ancient People,” is what the Menominee called themselves, the name “Menominee” being given to them by neighboring tribes. When discussing the project, Zinsli said “We should get in the habit of using these names. That’s what makes it real.”

Otāēciah, as well as the plaza, will now act as a reminder of the people from which the land was stolen, and will symbolically represent their strength and ancestry as time goes on.

The sculpture and plaza will be dedicated in a public ceremony on Indigenous People’s Day, Monday, Oct. 11 at 5:30 p.m. Cornelius himself will be in attendance, and the entire campus community is encouraged to attend and engage with the school’s ongoing commitment to land acknowledgement.

To learn more about the Otāēciah and Cornelius’ other work, readers can visit his website, studioindegnous.com, or find him on Instagram