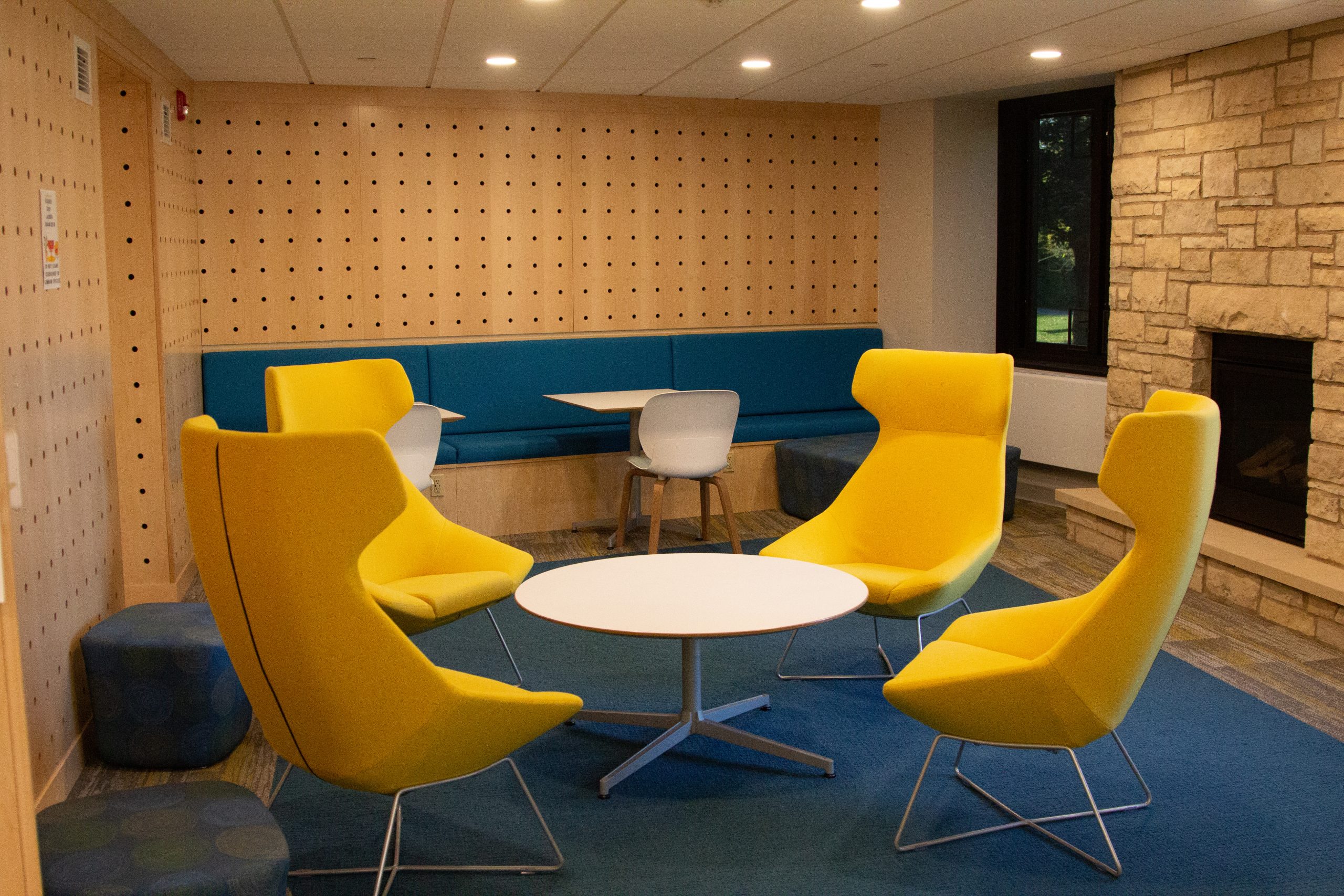 Although many student lounges have been converted to double rooms, the Kohler Hall lobby was renovated over the summer. Photo by Adam Fleischer.

Lawrence students are experiencing near-full capacity of housing spaces as the college kicks off Fall Term of the 2021-2022 school year, with students returning to campus in full for the first time since the start of the pandemic in March 2020.

With limited housing space this school year due to high demand, students like junior Caitlin Bourg have expressed their frustration with the housing selection process, saying it created unnecessary stress and confusion due to poor communication from the Residential Education and Housing Office. Some students were housed in rooms previously used as student lounges in Kohler Hall and Colman Hall.

“I was kind of confused of what was going on,” Bourg said. “It didn’t seem like I had much control over the process… there wasn’t much communication, I think I learned where I am going to live in two days before I moved in… It was definitely less than a week.”

Bourg was one of the students who took a leave of absence from the university during Winter and Spring Terms of last year due to COVID-19 and lived off campus. While living off-campus, Bourg took up a job and became quite disconnected from the university. Bourg said she did not receive much communication from the Residential Education and Housing Office and missed the deadline to fill out the housing form in the spring.

Realizing that she missed the deadline, Bourg filled out the housing survey in mid-July and requested a single room. The housing office told her that she would be assigned a random roommate unless she could find someone to live with, butt after being away from campus for two full terms, Bourg had no idea who else might be looking for housing.

Communicating with housing was also a frustrating process as it often took a few weeks for Bourg to hear back from the office. Bourg did not receive her housing assignment until the last week of the summer.

In response, Amy Uecke, Associate Dean of Students for Residential Education and Housing, said that many students did not communicate whether or not they would be coming back on campus after the office reached out to confirm their status. In addition, Uecke said that the end result is usually better when students are willing to wait for their housing assignments.

“Right up until move-in day, we were at the fullest we’ve ever been as an incoming class and returning class,” Uecke said. “We were housing students left and right, morning, noon and night.”

The fullness of housing is the result of several compounding factors including cancellations of off-campus programs, more returning students choosing to be back on campus and a larger incoming class, according Bonny Sucherman, Assistant Director for Residential Education and Housing.

Though this incoming class is larger than usual, the university did not overenroll, Dean of Admissions Ken Anselment said. The university hit its target of around 400 first-year students and another 15 to 20 transfer students this year according to Anselment.

The total number of enrolled students now stands at 1,499, a number comparable to the optimal total enrollment size of about 1,500 students for the entire college, per Anselment.

Anselment said the pandemic has made it more difficult for students to study abroad, which means more students are living on campus than the administration would expect in a typical year. In past years, students might choose to take a leave or study abroad during the academic year.

First-year student Caitlin Forbes is one of the students who was assigned to a room adapted from a student lounge.

“It’s pretty nice honestly,” Forbes said. “We have double the space we would have in a regular room. We have a TV and two windows.”