IGLU and a conversation with Instructor of Music Matt Turner 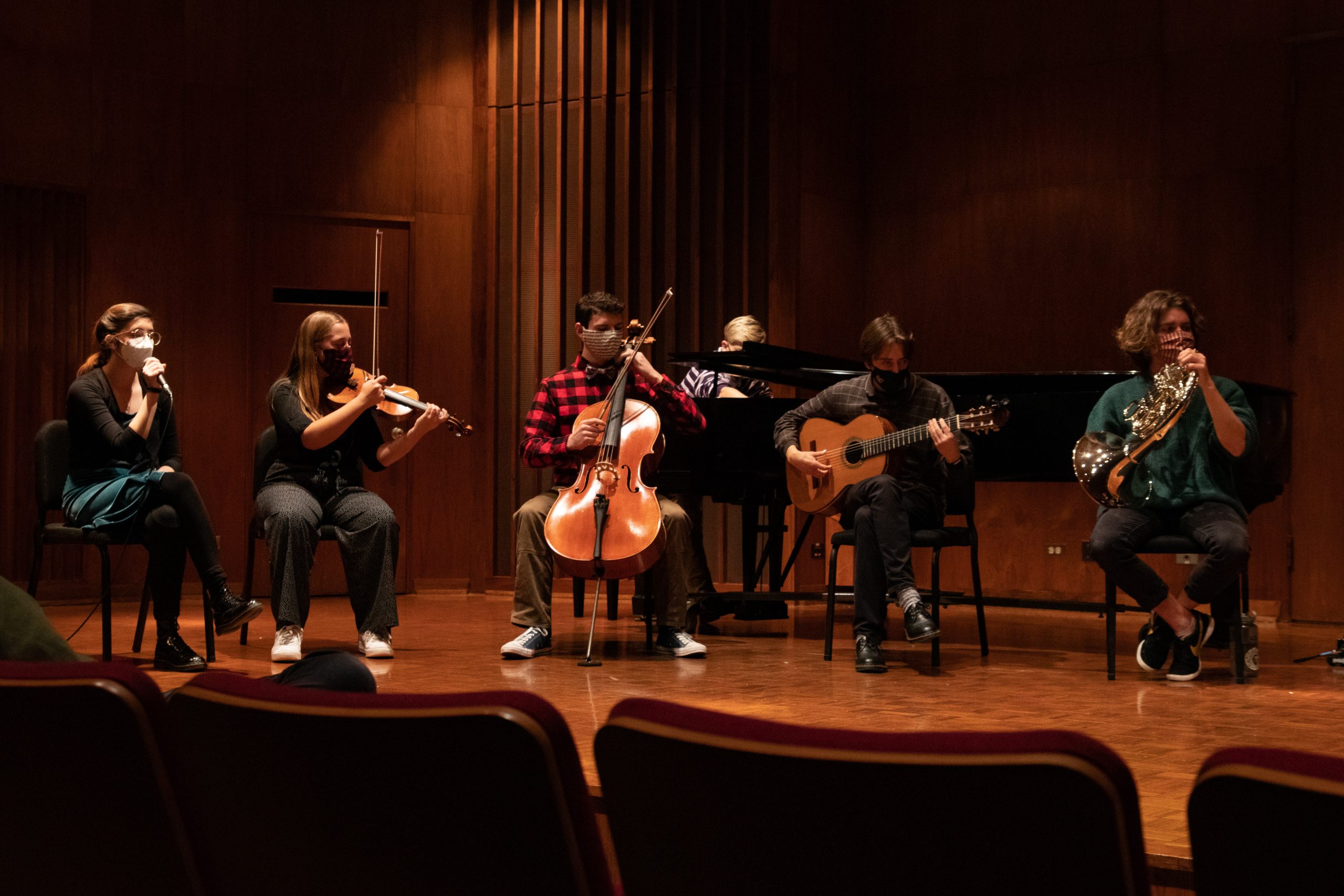 I wasn’t sure what to expect when I stepped foot in Harper Hall on Oct. 25, 2021, a notebook in hand as I read the words on the program over and over, “IGLU: Improvisational Group of Lawrence University.” I had been told that they were musicians and improvised their pieces in concert. I had heard great compliments from musicians who knew individuals in the group. However, I had never heard or experienced anything like it, and after attending the concert, I am not sure I ever will again.

On the stage stood several chairs facing each other in a semicircle. I counted thirteen musicians: vocalists, strings, percussion, etc. Then, the first thrums of the drum set into motion, and the chatty audience went silent. In a way, it was like hearing the sounds that might play behind a movie soundtrack, tempo and volume adjusting to the moment of story, the tension or lack thereof between sounds. At several moments, the instrumentalists and vocalists would look up at each other, and suddenly there would be a shift as they communicated, a new instrument might be implemented, or a vocalist would add a harmony to give a fuller sound. Watching IGLU was like listening to a conversation, one that doesn’t need words, but listening ears. It was a language that I didn’t know, but as each note played, I strived to understand it.

After the concert, I sought out Matt Turner, the director and an Instructor of Music at Lawrence, who shared his insights into the group.

IGLU, or the Improvisational Group of Lawrence University, sets itself apart from other musical groups at Lawrence by utilizing what Turner describes as “setting perimeters in rehearsals, or sometimes doing the exact opposite […] to create a multitude of textures.” Everything is improvised, which is made possible by each student’s exploration and understanding of their own instruments. The further the understanding of the “numerous timbres and textures” of an instrument, the more there is “that could be incorporated during a future performance.”

IGLU also prides itself in providing a diversity of sounds and cultural elements. “There’s quite an assortment of instruments in IGLU: banjo, mandolin, voice, strings, guitar, percussion, horn, keyboards, electronics,” says Turner. “IGLU is a space in which students are encouraged to go beyond what they know and to be comfortable creating something they don’t know.” There certainly was excitement in the air with each new piece, as both audience and musicians explored the path together.

Our conversation closed with the question of what one might gain in attending an IGLU show. When attending a concert, audiences watch musicians perform preplanned pieces. Concert, in simple terms, is performance. However, as Turner explains, IGLU allows its audience to “observe performers working together to create something from scratch, experiencing the element of surprise as an improvisation unfolds.” IGLU does not only perform but communicate, share, create and they leave the rawness of that process on the stage.