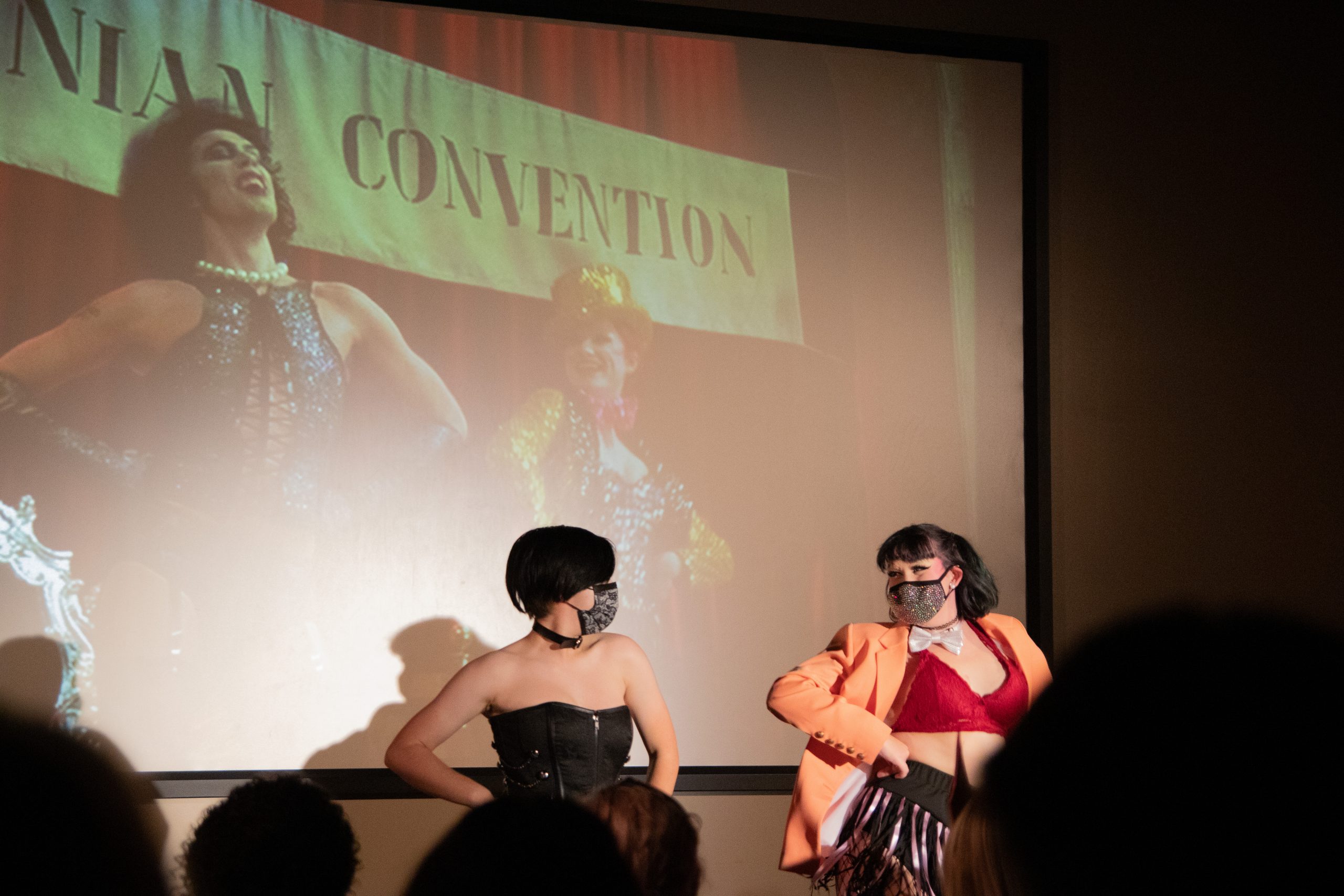 Image from “Rocky Horror Picture Show” taken with consent from members of the shadow cast. Photo by Jamie Dong.

“Rocky Horror Picture Show” was a massive success this year, with all three shows filling the cinema to capacity. The shows were all technically on Saturday, at 12:01 am, 8:00 pm and 11:59 pm. For each show, the audience was lined up at the door long before it started in anticipation of an exciting, interactive performance.

“Rocky Horror Picture Show” is a cult classic musical film from 1975 and is an adaptation of Richard O’Brien’s ***The Rocky Horror Show***. Although the film is problematic for a variety of reasons, it’s considered a staple in queer culture due to it’s large range of representation. It also allows “these communities to experiment with theater, sexuality, gender and expression,” according to the guide to “Rocky Horror Picture Show” presented to all first-time viewers at the show, or “virgins.” This expression is made possible through the shadow cast acting in front of the movie as it plays, and the audience is invited to participate as well using call lines. The show is highly interactive, with designated call lines and audience participation. The actors also interact with members of the audience who are near the front, with consent, of course.

Consent is an essential aspect of the show and was highlighted at the very beginning. A designated consent team was introduced this year and was there to make sure that actors and audience members were comfortable and safe for the entirety of the production. The consent team was comprised of eight student leaders who “play a proactive role in preventing sexual assault among cast, crew and audience.” The team also was present to “manage the historically problematic aspects of Rocky Horror including consent, racism, homophobia, anti-Semitism, transphobia, ableism, a host of insensitive call lines and COVID-19 safety precautions.” All members of cast and crew were trained in Bystander Intervention as well in order to further ensure safety. Although the show is interactive, the cast members ask for consent before touching any member of the audience both before and during the show.

The audience was informed of the rules of the show before it began, including a rundown on the appropriate use of call lines. It was made clear that any inappropriate behavior would result in removal from the cinema, as the show was designated as a safe space for all people. At the beginning of the show, those who had never seen the show before, or “virgins,” were invited up to the front to play a game. Several participants were asked to guess which was a real line from the movie or a call line, and the silly nature of the movie was highlighted.

For both productions of the show I attended, the audience was highly engaged in the performance, shouting call lines and joining the cast for dance scenes. This made for a highly enjoyable and energetic experience. There was lots of laughter and cheers throughout the entirety of the show. Every member of the cast and crew did a fantastic job, and it was a truly enjoyable Halloween event that is a staple of the Lawrence experience.