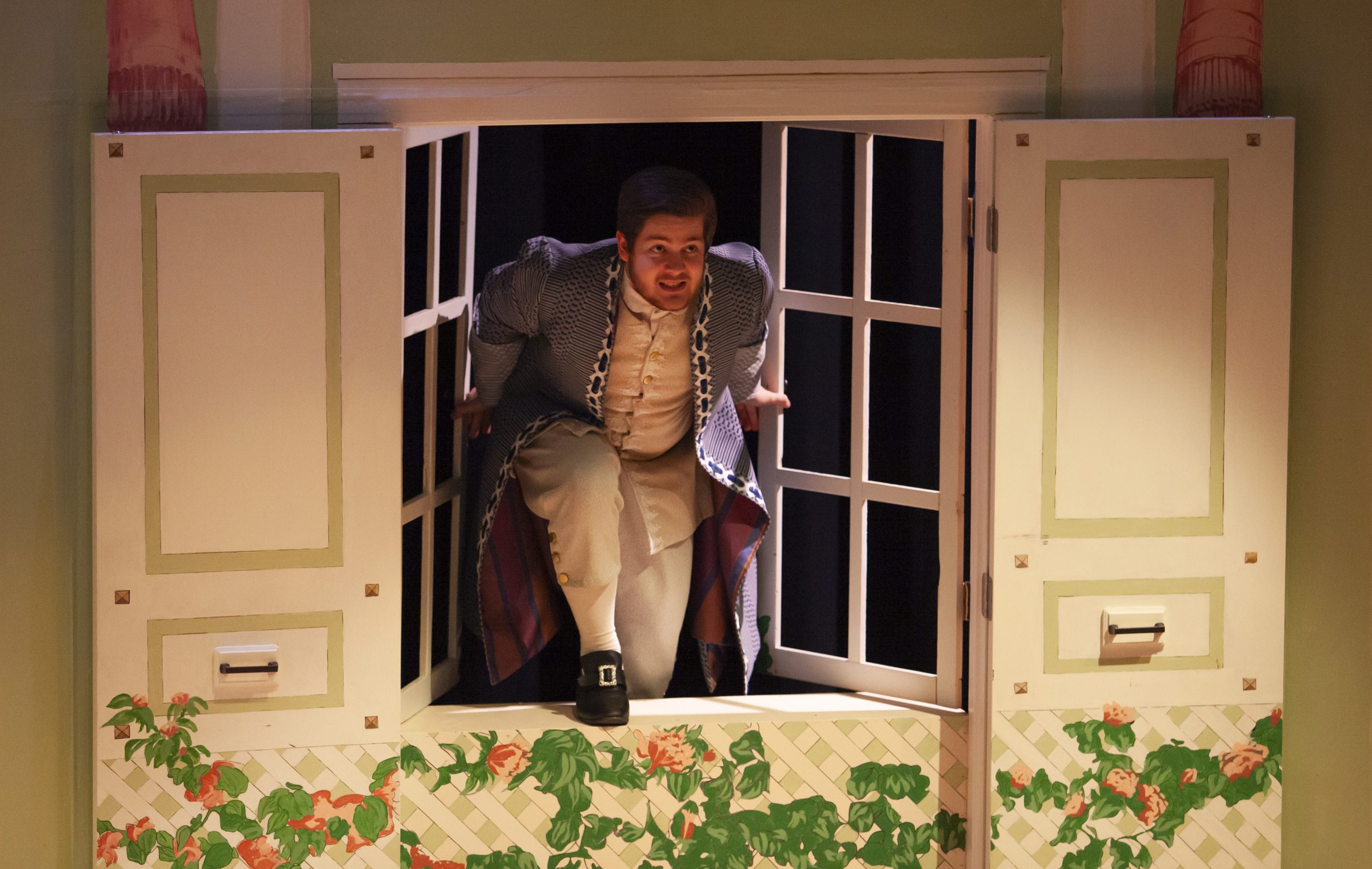 Alec Welhouse, a junior, climbs through a window during rehearsal for Molière Inspired, the Winter Term production from Lawrence University’s Department of Theatre Arts Feb. 14, 2022. Photo by Danny Damiani

Season 91 of the LU Theater Arts productions showcased three one-act plays, one written by Molière—a French playwright from the seventeenth century—and two inspired by him, in Cloak Theater this past Friday and Saturday night. The performance was directed by Kathy Privatt, stage managed by Nihan Bayfal and served as a senior experience for Lexi Praxl.

The first of the performances was a play written by Molière titled The Flying Doctor, or Le Médecin volant. The comedy follows the character Sganarelle, who impersonates a doctor, and later the doctor’s brother. Eventually, Sganarelle resorts to jumping in and out of the window of a home to keep up the charade, arguing and fighting with himself in the process. Alec Welhouse truly shined in his performance of this “flying doctor,” carrying his performance with charisma, wild untamable energy and a passion for his performances. If audiences weren’t laughing at his character’s ongoing charades, they were on the edge of their seats, wondering what he could possibly do next to keep the tangled lie going. Welhouse continued to impress within his roles in the other one-act plays as well; however, the writing in The Flying Doctor allowed him to fully explore the character he portrayed and connect with audience members across the room.

The Flying Doctor was a tough act to follow, between the period piece costumes, impressive staging and charismatic performances. However, the second of the plays, Scapin’s Tricks: The Trial, achieved this great feat. This courtroom drama saw John Winkler as Scapin, who stands accused of one trick too many, and his partner in crime, Sylvestra, played by Hannah Amell. The two had natural comedic timing as they found themselves deeper and deeper in the court proceedings, creating a sibling dynamic and rivalry that had the theater roaring with laughter every other line. Isabelle Hubert outdid herself in this script, between the commentary from “experts” watching court proceedings and a twist at the end that had audience members gawking during intermission.

The costume department should not be undercredited for what helped set the bar of these performances so high. Between the elegant period clothing of The Flying Doctor and the greyscale focus of Scapin’s Tricks: The Trial, the productions were intriguing and enjoyable to look at. Perhaps their expertise shined the most in the last performance, A Misanthrope or All the World’s Stage, which served as a bit of an homage and tribute to Molière and the timelessness of his characters. Following the brilliantly undertone costumes of the previous piece, this one utilized pastel colors and bright, flamboyant costume pieces to set each character apart. The costumes themselves seemed to serve as characters of sorts, adding another dimension that simply wouldn’t be achievable otherwise. To the cast and crew, be proud, and thank you for reminding audiences of the power of theatrical performances.