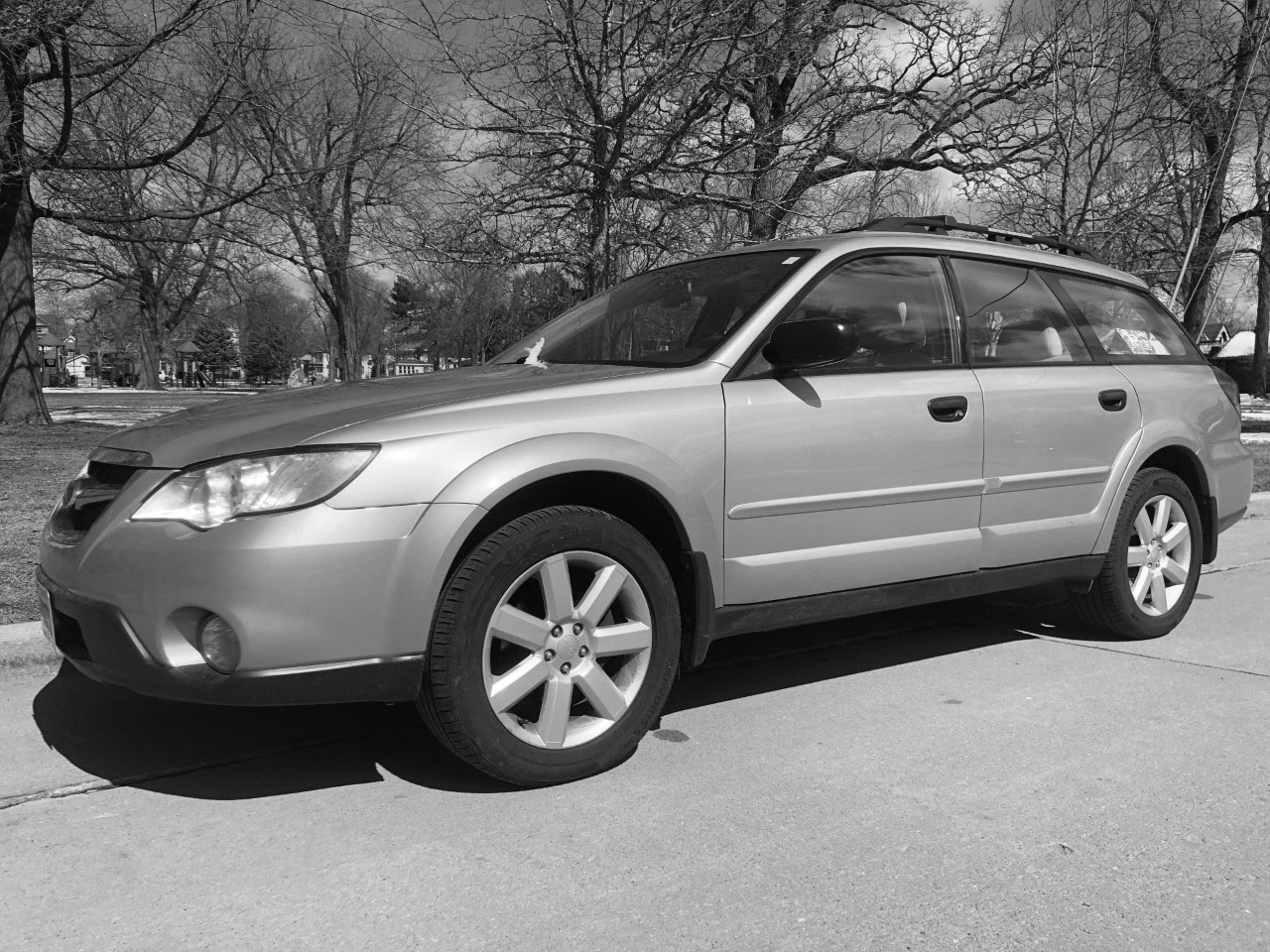 The cars that are ours. While I know that private property rankles for some among us, there are few consumer goods in the modern American’s life more costly, personal, and dear than our mode(s) of transportation. Today and in the weeks to come, I’ll be profiling vehicles and their owners you may see around campus. The profiles will span reviews of the transports themselves, their histories and peculiarities as divulged by the associated owner, and advice these Lawrentians have for those interested in an automobile. Thank you for reading.

Senior McKenna Conlin is the owner and interior decorator of a golden 2009 Subaru Outback, a vehicle produced just as the financial sector collapsed worldwide and American automotive giants were revealed to be without clothes. While Detroit motor companies were bailing out their financial malfeasance with the taxpayer’s dollar, Subaru of Ota, Japan was well-situated to increase its American market share size—origins shocking to some, as “Subies” appear to spontaneously burst forth from the lower mountains of Colorado and proliferate into the Pacific-Northwest from there.

In her own words, Conlin bought the car,

“Out of necessity. It was the beginning of the COVID times, and my other car was lost in a horrible accident. When we were told to move off-campus, I realized all of a sudden, Wow; this is the worst time to not have a car. So I needed one urgently, and the people I was living with, we together scraped up enough money to buy the car.

It’s a Subaru. I love Subarus. I have a little bit of a bias because my parents had one when we were young and it lasted forever and ever. I’m hoping this one will last that long but it’s not looking too great.”

Subaru, a relatively niche brand, is most known for an ostensibly superior ability to drive in snow with its universal adoption of All-Wheel Drive (AWD) in its vehicles. The manufacturer developed a cult following among tuners and college students, evidenced by the many modded hatchbacks farting around today and a cursory glance of undergrad parking lots—and for good reason. Subarus are robust, earthy vehicles that stand apart from the other two Japanese manufacturers, Honda and Toyota, who are the gold standard for reliability but tend to make simpler, more staid vehicles e.g., the 2007 Toyota Camry and 2010 Honda Accord.

The first thing an observer might notice about Conlin’s Outback is its sleek length. A station wagon with a raised stance belying its offroad pedigree, the Outback is as attractive as the wood-paneled PT Cruiser was repulsive. Perhaps it’s most similar to a zoo’s pregnant lion—svelte, high-capacity, with a touch of the savannah still lingering about its domesticated form. The brilliance and commercial success of the design has been so successful that even the most recent Subaru Outbacks vary only slightly from the 2009 model.

While the Outback has a great deal going in its favor, walking around the outside reveals some of its designs drawbacks, the worst of which is that your belongings are visible to the world through all windows. Whereas a traditional car has a trunk—a vertically swinging slab of metal that protects your stuff from the elements and wayward eyes—the Outback is essentially a shorter SUV and all the storage is behind the passenger seats. In fairness, the utility of the design is undeniable. Skis, dogs, and the odd chicken can all cohabit the back comfortably, but the trade-off is the world knowing what you own and having ready access to it.

As head of security, Conlin has appointed the ghoulish “Glorf”. A Goodwill find, Glorf “is a gargoyle…he probably haunts my car…he seems friendly,” shared Conlin brandishing a small statue of a Gotham-esque pig demon. When asked about whether widespread adoption of Glorfs would be a benefit, Conlin mused that “Yes. I think so. Especially because he fits into the cupholders. I like to think that if I ever got pulled over for driving in the carpool lane that I would say, Officer, no. Here is Glorf.” The officer would then be rendered mute by Glorf’s baleful gaze, one can only assume.

Some boomers might complain that things were built to last back in the day, and in this grumbling, they continue a strong tradition of being more wrong than right. While servicing one’s vehicle has trended toward complication with the many features and luxuries we enjoy in our modern conveyances, the reliability of even the worst cars has improved tremendously. 100k miles on the odometer used to be an accomplishment and signal the end of a car’s useful life; now, it is but a mnemonic to get the oil and transmission fluid swapped.

That said, repairs do come up. Conlin divulged,

“Well, just three weeks ago I was driving to the mall in the snow and I was trying to take a left, and when I was idling in the intersection, it died. So, I had it towed to a local auto shop, and the mechanic said, So, did you know that everything is wrong with your car? And mostly, they did a lot of maintenance that I had been putting off for way too long, but they also completely redid the radiator—which is the biggest piece of maintenance that I’ve had to have done on this car.”

But is it worth it? With inflation and high demand relative to supply creating adverse purchasing conditions, novice buyers are valid in their trepidation. For Conlin, the answer is yes, for a multitude of reasons that may or may not reflect your reality. First, a car for her is freedom of movement. Whether it be some emergency that arises, or the need to clear her head, Conlin appreciates the mobile retreat her car offers.

Furthermore, the Outback allows her to move her entire life with her wherever she goes. The cavernous space mentioned earlier means she can pull up her stakes and shove off to her next destination without a third party. Finally, a car lets her road trip, and road trip she does, back and forth from California to Florida and up to Wisconsin for school.

She recalled the emptiness of Montana, and  “Driving for hours and hours, and it’s beautiful, but you haven’t seen another person or even a gas station in two hours. And all of a sudden, you come across this stretch of highway that has metal bars built into the road such that if you drive over them at exactly sixty miles per hour, it plays a little musical tune…I love that stuff so much.”

So while her car’s visors may be a bit floppy and the reliability fading, the Subaru Outback fits McKenna. Seeing this relationship firsthand reminded me that our cars are extensions of ourselves for so many of us—peculiar, semi-irrational and absurd, but wonderful for those reasons. Suffice to say, with Glorf on the job, Conlin and her Outback have many more beautiful miles to enjoy together.