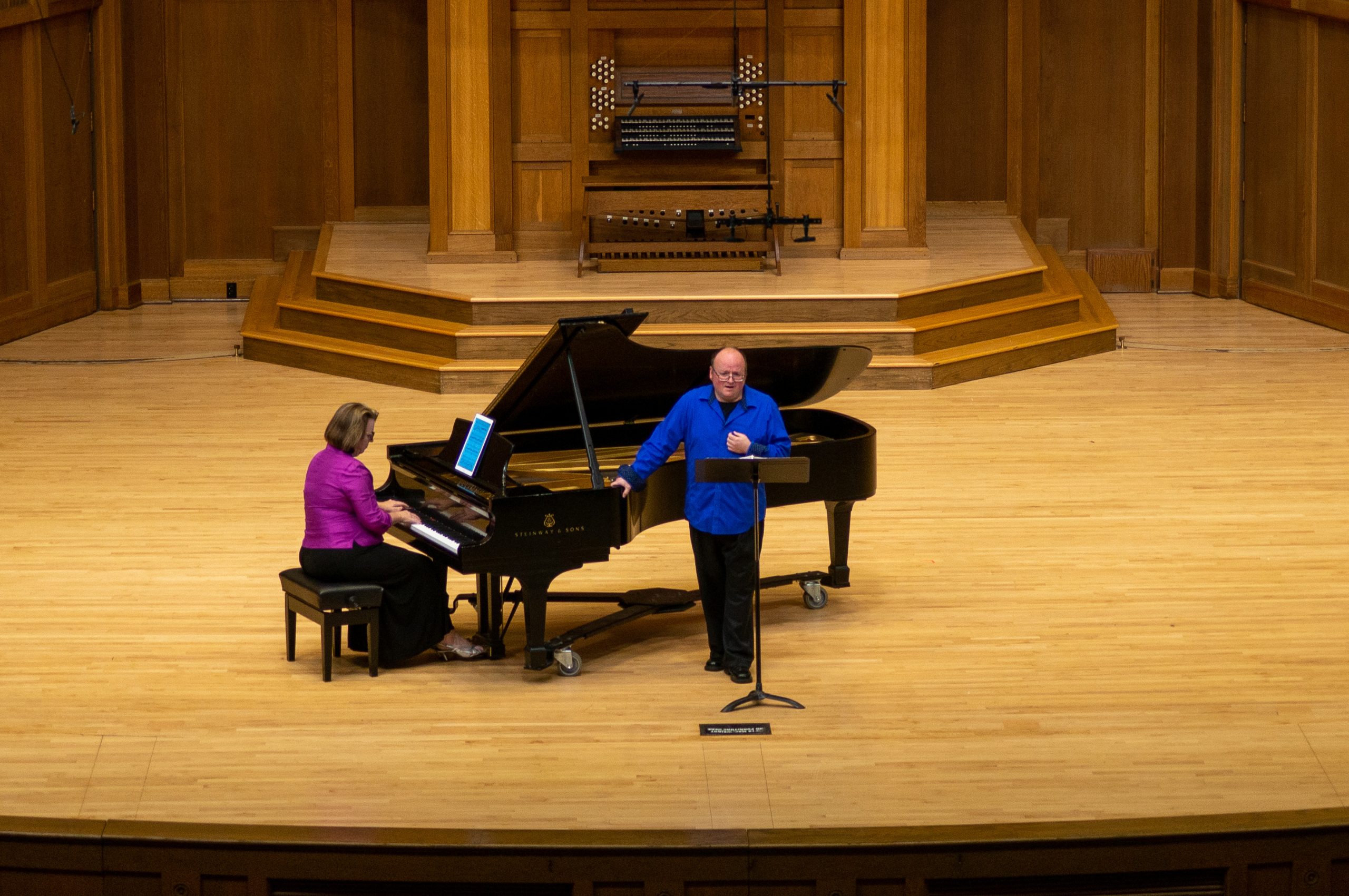 If the pace of ten-week terms was already starting to get to you by the end of week two, and you found yourself wanting to escape to a different time and place, Associate Professor of Music and tenor, Steven Paul Spears, and Assistant Professor of Music and pianist Kristin Roach, may have had the perfect remedy. Attending their joint recital in the Memorial Chapel on Sunday, Sep. 25, was like boarding a musical time machine to visit idealized versions of the world imagined by 19th-century European composers.

First stop: Austria. Spears and Roach began with a set of pieces by Franz Schubert, the first of which was titled “Adelaide.” As the text was in German, Spears provided a translation which informed us that the lyrics were those of a love song laden with images of the beauty of nature in springtime, a theme that carried through several of the other pieces on the program.

The performers captured the essence of this imagery touchingly. The gentle flowing of the piano throughout much of the piece offered a sense of comfort and security which was matched by the vocal line. While there was a sense of longing in the lyrics and the music, it was expressed more as sincere fondness than as intense passion and therefore did not disrupt the trance-like mood of the piece.

The next selection in this set was “Nacht und Träume (Night and Dreams).” If I had to describe the feeling of a weighted blanket using music, this piece would be a good fit. The lyrics in the first half of the piece are about enjoying the quietness of nighttime. A chord change in the piano then marks a transition representing daybreak, and the second half of the piece expresses wanting nighttime to return once the day has started.

While the first two selections were both exceptionally placid, the third, “Ganymed,” had a bit more of a playful bounce to it. While the atmosphere of the piece was light and energetic, even excited in places, the subject matter was not purely frivolous. The piece took its title and lyrics from a poem by Goethe in which Ganymed, a young man, expresses his love for God and his admiration for the beauty of nature that He has created.

The poem is based on an ancient Greek myth in which the relationship between Ganymed and Zeus is sexual, and while that aspect is less overt in Goethe’s version, there is still a strong sense of devotion and intimacy in the poem and in Schubert’s piece.

Spears and Roach then transported us to France, for a pair of compositions by Henri Duparc, the first of which was “Chanson Triste (Sad Song).” Thankfully, this piece did not reflect the unimaginative nature of its title. The lyrics continued the established themes of nature imagery and love, but from a less lighthearted approach, as they described someone hoping that being with their beloved would relieve their suffering.

Roach’s accompaniment set the nighttime scene with fluid patterns running across the lower and middle register of the piano, while forays into the upper register could represent stars or the moonlight referred to in the lyrics. Spears demonstrated a convincing show of vulnerability through both his voice and his facial expressions.

The second piece by Duparc was “Phidylé,” another love song laden with luscious descriptions of birds, trees and the like. The piano began with almost hypnotizing repetitive chords, and subsequently the lyrics encouraged Phidylé to fall asleep in the meadow.

As Spears continued to describe the surroundings, both voice and piano gained freedom and ardor in parts and serenity in others, allowing Phidylé’s lover to express his underlying feelings for her through nature imagery.

After this brief trip to France, Spears and Roach returned us to Austria for a set of four pieces by Hugo Wolf, the first of which was “Der Rattenfänger (The Rat Catcher).” This piece was sort of the oddball of the program. While it kept us in the same sort of mythical fairytale land as many of the other pieces, the story it told was that of the pied piper using music to lure away rats, children and women to kill them  —  clearly more macabre than the other songs.

As Spears introduced the piece, he explained that “it’s creepy, it’s meant to be creepy” and likened its style to that of Schubert’s famous “Erlkönig.” He also drew our attention to the motifs in the piano accompaniment of rats running and of a lute being plucked. As he sang, Spears brought out the storytelling element of the piece by raising his eyebrows in more dramatic spots.

The next selection by Wolf was “Verborgenheit (Seclusion).” In it, a man pleaded with the world to leave him alone and let him experience suffering and joy without the temptation of love. The song began slowly and in a state of melancholy, but as the poem’s speaker continued to explore his internal emotions, the music built in intensity before returning to the lyrics and music from the beginning, this time with a sense either of weariness or peace.

The third composition by Wolf was “Anakreons Grab (Anacreon’s Grave).” Anacreon was an ancient Greek lyric poet, and the text describes the passing of the seasons around his grave. Spears and Roach effectively captured the somber, elegiac quality of this piece with tenderness.

The final piece of the program was Wolf’s “Er ists’s (Spring is here).” After the darker themes of the previous three selections, Spears and Roach returned to the cheerfulness of the pieces with which they had begun the recital. The piano accompaniment fluttered throughout “Er ists’s,” as Spear gleefully sang of blue sky and flowers.

Our time travel machine returned us to the 21st century in Lawrence’s Memorial Chapel, as the audience enthusiastically applauded Spears and Roach in gratitude for the journey they had taken us on. Their program covered the range of the emotional spectrum of human experience, from death and grief to love and joy, leaving us with optimism to carry us through the coming weeks.