The Colorful Music of Kaleidoscope7 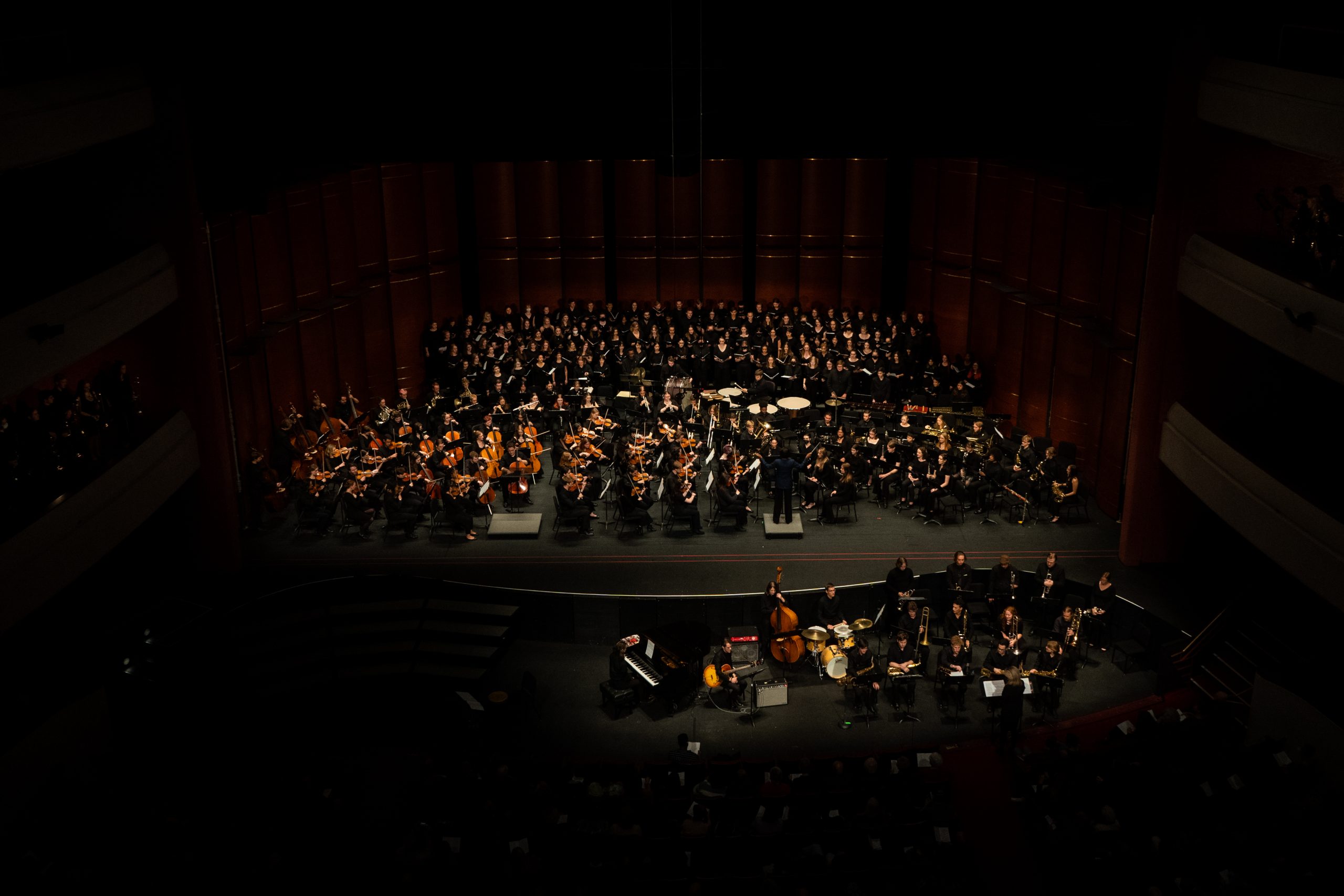 All ensembles performed "In the Quest for Understanding." Photo by Nora Murphy '22.

This past Saturday evening, Oct. 8, I made the walk down College Avenue to the Fox Cities Performing Arts Center, eagerly wondering what exactly Kaleidoscope7 had in store for me. It was my first time in a fully packed concert hall since before the pandemic, and my first musical event in Appleton outside of the Lawrence Conservatory.

As I took my seat, I noticed the unfamiliar faces of Appleton community members all around me and felt a sense of excitement that we would all soon be experiencing the musical offerings of so many of my fellow Lawrentians together.

Before the performances began, Dean of the Conservatory of Music Brian Pertl welcomed us to the event, acknowledging that, due to the pandemic, it had been five years since the last Kaleidoscope concert, and expressing the importance of this year’s event as an opportunity for “the re-recognition of community” for both audience and students through “the magic of a fifty-minute nonstop concert.”

Kaleidoscope is a typically biennial event featuring an assortment of Lawrence ensembles large and small. The audience was asked to hold their applause until the end of the concert to allow for a rapid-fire flow of music from each ensemble to the next. Lawrence Symphony Orchestra (LSO) conductor Mark Dupere compared the experience to a musical “tapas meal” because of the wide selection of musical samplings it presents.

Dupere’s ensemble was the first to perform this year, making the counterintuitive choice to perform parts of the finale from Pyotr Tchaikovsky’s Symphony No. 4 in F minor, op. 36 to begin the concert. With its blur of violin bows, its crashing cymbals and its overall ceremonial atmosphere throughout much of the piece, LSO opened the concert powerfully, introducing a feeling of momentum and building anticipation from the get-go.

Waiting at the corner of the main stage, prepared to begin as soon as LSO had finished, was the Lawrence University Concert Choir, directed by Stephen Sieck in their performance of Jubilate Deo, a contemporary setting of Psalm 100 (“Make a joyful noise unto the Lord”) by Ko Matsushita. In accordance with its subject matter, this piece was infused with exuberant energy but featured contrasting moments of calmer tenderness.

Next came a performance by the flute ensemble of Valerie Coleman’s “Umoja,” played from a box seat to the audience’s upper right. The piece’s title translates to “unity” in Swahili. The ensemble created a reassuring mix of textures that evoked for me fluttering birds and rolling hills, making me consider a more expansive sense of unity that includes not only humanity but all of existence.

From the opposite box seat, the horn ensemble then performed “La Chasse (“The Hunt”)” by Nikolai Tcherepnin, a piece in a triumphant call-and-response style where the call from one horn is joined by the others in turns, creating a sense of conversation across distance.

From in front of the stage, the Mariachi ensemble then performed “La Bikina” by Luis Miguel. It was especially enjoyable to see the expressivity and passion with which these musicians performed, some singing and playing instruments simultaneously.

Next came selections from “A Little Complex” from “The Musical of Musicals,” a lighthearted comedic performance that elicited laughs from the audience at various points, followed by “Impulse Engine” by Carolyn Bremer, performed by the wind ensemble. In this piece, rhythmic percussion created a coursing energy that was passed between various sections of the ensemble, coexisting with a freer, more improvisatory-seeming line.

Cantala then sang “Peace Song – Beatitudes” by Tim Brent, accompanied by djembe, which continued the theme of percussive energy. This piece had a slower, more reverent-sounding unaccompanied middle section before returning to its original joyful character.

I do wish that the two choral groups that performed could have displayed more diverse possibilities of what choral music can be. Both Concert Choir and Cantala sang contemporary settings of biblical texts, and while these were innovative, enjoyable pieces, it presented a limited scope of choral music. It would have been nice to hear choral compositions from differing cultural traditions or with differing subject matter.

Following this performance, a small jazz ensemble played senior Jasper Kashou’s “Just Be on the Scene.” As each instrumentalist finished their particular solo, other musicians in the group would smile at them in admiration or congratulation, and it was lovely to see the encouraging atmosphere of collaboration this created between them.

Lawrence University Opera, Viking Chorale and LSO then performed Sextet with Chorus from Act Two of Gaetano Donizetti’s “Lucia di Lammermoor.” This appeared to be a love triangle scene, in which emotions ran high as two men fought passionately over a distressed Lucia.

In the penultimate performance of the night, Lawrence University Jazz Ensemble played Astor Piazzolla’s “Tres Minutos con la Realidad (“Three Minutes with Reality”),” arranged by Fred Sturm ‘73, which I can only describe as an immersive, chaotic marinade of constant percussion with a prominent trumpet part and a more relaxed saxophone solo integrated into it.

To conclude the event, all of the Kaleidoscope musicians performed “In the Quest for Understanding,” an anthem written in recognition of Lawrence’s 150th anniversary that pairs an adaptation of Gustav Holst’s “Jupiter” with a text by Carl Daw, Jr., about the past and present of Lawrence and its values. This composition was guest-conducted by Lawrence University President Laurie Carter.

Overall, Kaleidoscope7 provided a rare opportunity to hear a wide breadth of the musical ensembles and styles in which Lawrentian musicians participate, all in a single, concise event. I even noticed some students participating in multiple ensembles throughout the evening, showing the range of their musical abilities in rapid succession.

I’d like to congratulate the performers and coordinators of this event for pulling off an ambitious and effortful representation of music at Lawrence to share with the greater Appleton community.