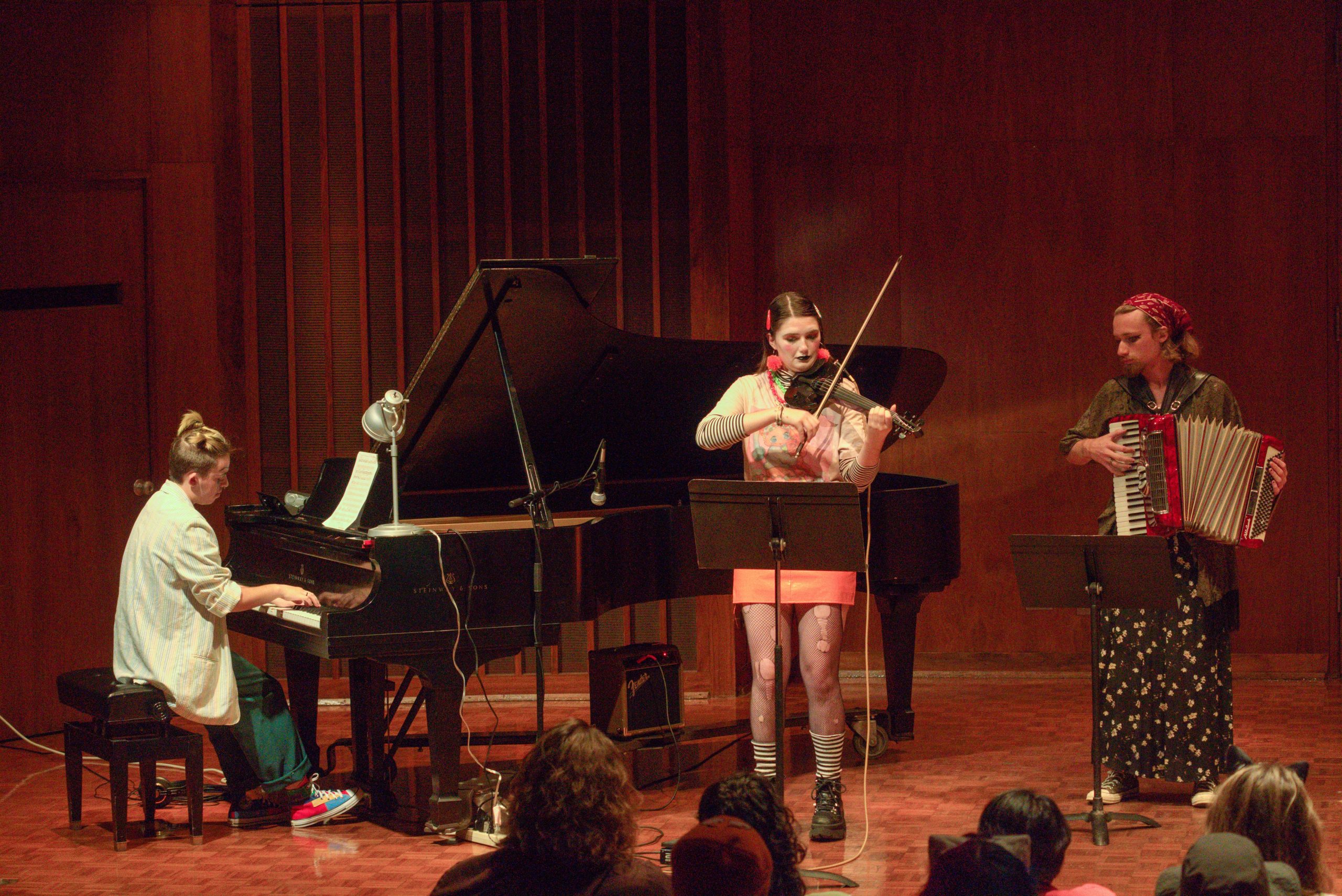 Pianist Lucian Baxter’s recital on Oct. 31 in Harper Hall began with a composition by Baxter titled “dwellings and belongings,” a minimalist piece which Baxter described as “a dance between insecurity and trust, loneliness and togetherness.” For this piece, Baxter was joined by accordionist Matthew DeChant and violinist Ellie Lutterman, all of whom were dressed festively for Halloween.

The piano began alone, with motifs that to me sounded like calling out a question. The piano was then joined by accordion and electric violin but continued to evoke loneliness and uncertainty. As the piano took on a quietly flowing character, the accordion and violin sounded like howling wind, and the piano increased in intensity to match this brewing storm. This intensity abruptly subsided into gentle piano chords accompanied by pizzicato on the violin that reminded me of raindrops, and the accordion continued its windy texture before beginning a more melodic passage.

Towards the end of the piece, the slowly changing notes bowed on the violin and played on the accordion matched in character, both sounding as though they were searching for direction, and they sounded cohesive with the piano motifs which resembled those from the beginning. The piece ended with one of these questioning motifs in the piano.

After this piece, Baxter spoke about their personal journey putting together this recital. They explained that after the unexpected loss of both of their grandfathers in February, creating this recital was part of their mourning process. They also explained the significance of having their recital on Halloween night, saying, “some spiritual traditions teach that this is the night when the veil between the worlds is the thinnest, so spirits can cross over to connect with their loved ones on this side” and expressed hope that their recital could give audience members a space to be with their grief.

The next piece on the program was “Aorta” by Daniel Wohl, which had three subsections, titled “Aorta,” “Phantom Limb” and “Bones.” Baxter underlined some main themes for this piece, including growth and decay, and the uncanny and the comforting. They were joined onstage for this piece by dancers Mauriah Donegan Kraker and Tori Schneider, both dressed in all black.

The stage was completely dark for a moment before the piece began, as the dancers got into position. When the light returned, Kraker lay underneath the piano, and Schneider leaned against it, crouching. As the piano began with dissonant, meandering chords, Schneider began to move across the stage, often in unsettling, contorted movements. As tension built in the piano, Schneider appeared to be anxiously searching for something.

The piano was joined by electronics that sounded like somewhere between a train whistle, a howling wolf and the cry of a distressed animal, and Schneider began moving around the stage on all fours and then lying on the ground as Kraker gradually began to emerge from under the piano. As this section ended, Schneider sat on the piano bench behind Baxter and leaned over as Kraker sat on the ground beside the piano, reinforcing the joint role of piano and dance in telling the music’s story.

The second section, “Phantom Limb,” began with the piano playing the same two dissonant chords in various rhythms, as though repeatedly trying to reach a resolution. Both dancers began crawling across the stage and then pushing up their shirts (they wore purple leotards underneath) so that their faces were covered with dark fabric. They then knelt like this with their arms raised and swaying as they turned in different directions before resuming their crawling, this time alongside each other. As they did this, the piano began a new, more intuitive pattern of notes.

In the third section, “Bones,” the piano created a rich and dissonant texture throughout. The dancers removed their shirts, uncovering their faces, and began circling around each other, before Kraker lifted Schneider onto her back. They remained frozen like this for a few moments and then stood facing each other, their hands on each other’s foreheads, pushing against each other and rocking back and forth. The dancers then began running away from each other, with Schneider even running into the audience at one point. The piano ended loudly, the last note reverberating through the hall as the dancers breathed heavily, bringing the piece to an end.

The final collection of pieces on the program was Nicole Lizée’s “David Lynch Etudes,” which combined piano with what Baxter described as “glitchy transmutations of found audio and visuals” taken from film director David Lynch’s body of work, which were played over speakers and projected on a large screen.

The first of these etudes, “Footwork,” featured two interspersed repeating video clips, one of them of a lady jumping on a bed, and the other of two people dancing at a party. Both clips showed only the people’s feet, and they were repeated at varying speeds, sometimes flickering or glitching, which was reflected in the patterns on the piano notes.

The next etude, “Tombeau de Leland,” began with a character singing. As a segment of the singing was looped and distorted, the piano began the same melody, and the video screen showed a closeup of someone’s tongue with a picture of the character on it, an absurd motif that continued with other characters throughout the etudes.

These pieces definitely took advantage of the shock factor, as audience members giggled with discomfort and surprise at many points throughout. Most of the etudes seemed to explore relationships between two people, using piano and unexpected camera zooms or juxtapositions to convey the complexity of the underlying emotions in their interactions with each other.

“Talk Show Étude,” the last of the set, contained two parts: “Spine Scherzo” and “Devilish Mind.” Both used phrases spoken by a talk show host and looped these phrases, taking advantage of the cadences of her voice to make her spoken words into an eerie song. In “Spine Scherzo” the words “shiver down your spine” were repeated, accompanied by an emotionally expressive piano part. In “Devilish Mind” the words “is your devilish mind scheming” were repeated and slowed down so they sounded like they were spoken in a deep voice. The piano was dissonant and hurried, contributing to a chaotic, threatening atmosphere.

As this final piece finished, the audience gave Baxter an enthusiastic round of applause. I can genuinely say that this is one recital I didn’t want to end. Its atmosphere allowed me space to consider aspects of human experience in new ways. The unexpected and unsettling music, sound and visuals came together to make a performance perfect for Halloween night.