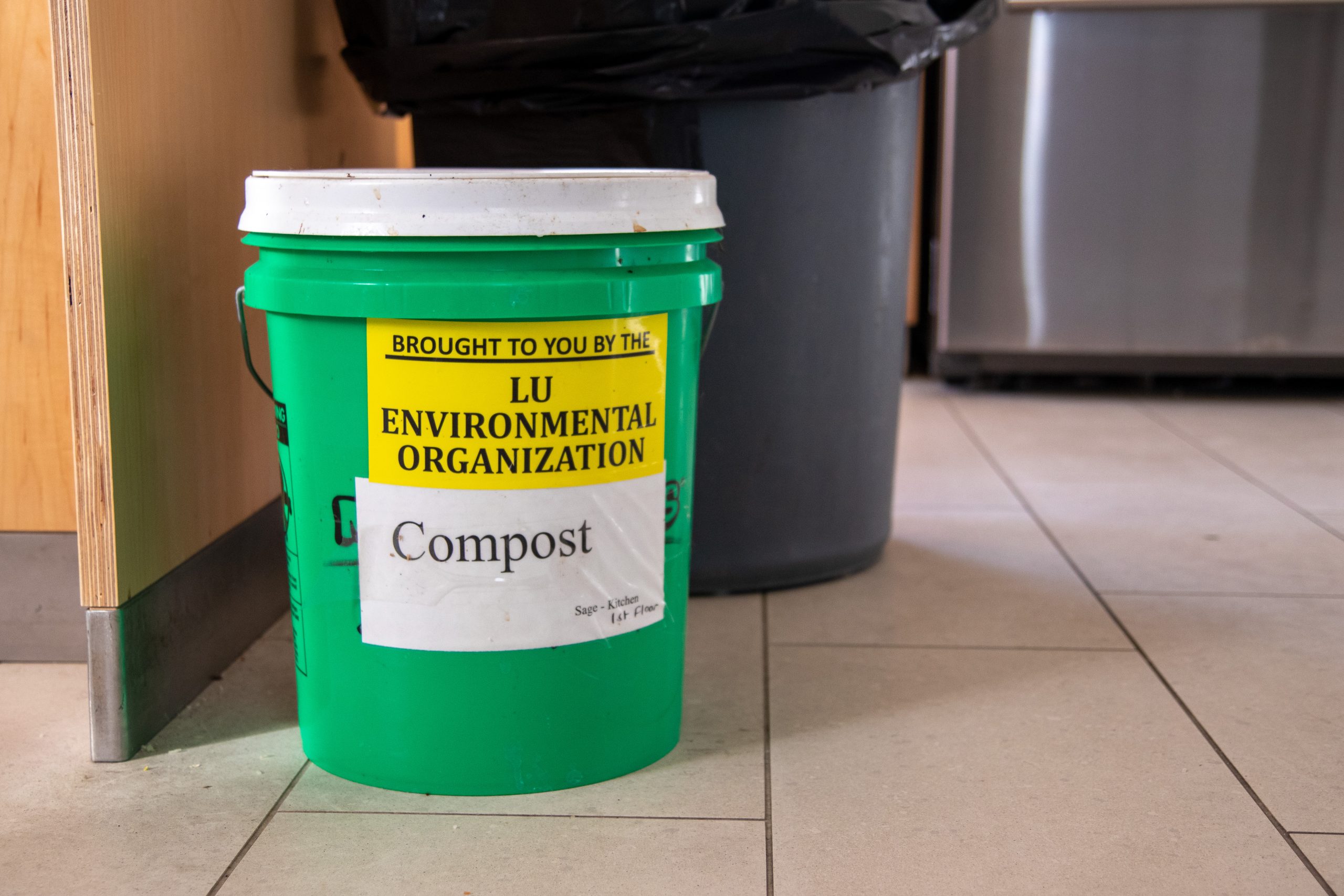 The compost bin in the Sage kitchen. Photo by Rongyan Song.

The Lawrence University Community Council’s Sustainability Committee voted to pay student composters on campus for their work during the 2022-2023 academic year.

Composting, something historically done by volunteers at Lawrence, is considered by the Sustainability Committee and Lawrence University’s Environmental Organization as one of the best tools for sustainability. It reduces costs, the amount of waste the campus puts into landfills and Lawrence’s carbon footprint while helping out the Sustainable Lawrence University Garden (SLUG), says LUCC Sustainability Committee Co-Chair junior Anders Hanhan.

Now students who collect dorm, loft or academic building’s food waste and deliver it to SLUG gardens will log their composting efforts and receive compensation for their work.

“We proposed this measure because we noticed our composters had been doing a lot of work and they’d been putting a lot of time every week in going down to the SLUG garden and emptying their compost bins,” said LU Environmental Organization Co-President Greta Thoresen. “We felt that it would be important for the university to pay them, because they do have all these initiatives to be more sustainable.”

The LU Environmental Organization recently proposed the program; however, discussion of paying students for composting has been ongoing for a few years. According to Hanhan, the idea was considered last year and the administration even had some funding set aside for it, but it never was pursued due to opposition from now graduated members.

The program will be funded for this academic year using the Environmental Project Fund, which has been used for a variety of environmental purposes, such as last year’s thrift store.

According to Hanhan, there are currently 29 active composters who will be paid $50 per term for logging compost six times, and the program is able to pay up to 35 people. In total, the program will cost $5,250 for the year if it has 35 composters each term.

“We approved this for one year only because we strongly believe that the compost program is objectively one of the most sustainable programs on campus, and administration should be chipping into that project and making sure that it is long-term viable,” Hanhan said.

What will happen next year is an ongoing conversation, according to Hanhan, that LUCC will have to have. There is little to guarantee Lawrence’s administration will decide to continue the program as they had considered previously, and the Sustainability Council is adamant on avoiding tying the Environmental Project Fund up in logistical costs. However, both Hanhan and Thoresen are optimistic that this decision will advance Lawrence’s sustainability and lead to continued programs and decisions in the future.

“I think that the decision is a good step for us right now, but I think it would be even better if we could have more incentives on campus to be sustainable,” said Thoresen.