The LU men’s basketball team held the highest scoring team in the country in check last Friday night in a 128-110 win over Grinnell, but they did not have enough energy to hang on against Monmouth last Saturday afternoon, and were defeated 60-56. On Friday night, the Vikings had a monumental task: slow down the highest scoring team in the nation, and stop the leading scorer in the country. Grinnell came into Friday night’s game averaging 126.3 points per game—the highest average in any NCAA division. They also had sophomore guard Steve Wood, who leads the nation in scoring with 27.5 points per game. That’s not forgetting Grinnell’s sophomore guard Steve Nordlund, who leads the country with 5.9 three-pointers made per contest.

The game began as expected, as a running, gunning, shootout. Grinnell held true to its jump-shooting form: their first seven shots were three-pointers.

Lawrence came out in a 1-3-1 zone, trying to slow the Pioneers’ shooting, but Grinnell shot-three pointers on fast breaks, so the zone was only partially effective. Grinnell set up a press on defense, but Lawrence found ways to break the press and get lay-ups on the other end.

With 13:06 left in the first half, Grinnell held a 17-16 edge. As the game settled down, Lawrence’s 1-3-1 zone became much more important. It did hold Grinnell’s long-range bombers in check, and with Lawrence’s ability to break the press, they remained close.

With 5:30 remaining in the half, Jason Holinbeck put in a lay-up off Kevin Cooper’s steal, giving LU its first lead of the game 40-39. The problem was, though Lawrence kept getting lay-ups at one end, the Pioneers heated up on the other.

The Pioneers, after a slew of three-pointers, went into the locker room with a 57-55 lead. The zone defense of the Vikings had done its job, as Wood only had four points at halftime. Nordlund had only attempted three from beyond the three-point line, but converted two of them for his six points.

As a team, Grinnell shot 12 for 27 from the three-point arc in the first half, but the story of the half was Lawrence’s shooting. The Vikes shot an astounding 77 percent in the first half. Lay-ups were frequent—senior guard Ryan Gebler led all scorers with eighteen points at the half.

In the second half, the Vikings came out sloppy. Grinnell took advantage of the Lawrence miscues and leapt to a seven-point advantage. Many of the Lawrence fans were not happy with the official’s calls, and let them know it frequently. Coach Tharp was not happy either, and was given a technical foul with 16:59 remaining in the game.

The technical turned out to be a blessing in disguise as it sparked the Vikings, who came roaring back. The game continued to be an up-tempo one, with both coaches substituting often to ensure fresh legs on the court.

The score climbed as LU continued making lay-ups off the Grinnell press and Grinnell continued to hit three-pointers. With 6:00 remaining, both teams broke the one hundred-point threshold, familiar territory for Grinnell but not so for LU.

In the latter part of the second half, the LU zone shut down the Grinnell offense, and Lawrence closed out the game with a 22-4 run. The Vikings ended their miraculous performance with a 128-110 victory.

The Vikings zone defense held Wood to only thirteen points. Nordlund finished with five three-pointers, and Grinnell shot an amazing 21 for 59 from beyond the arc. LU was lead by many stars, most notably Holinbeck, who was only two assists shy of a triple-double. He had thirty-one points, eleven rebounds, and eight assists. Freshman forward Kevin Cooper was the high scorer with thirty-three points and ten rebounds. Senior Gebler scored twenty-nine points for the Vikings. These were career highs in points for all three men. The Vikings ended up shooting an amazing eighty percent from the floor, though not one of these shots was a three-pointer

The Vikings were ecstatic after the game, none more so than Coach Tharp. “These guys did a great job, they kept their composure, and played unbelievably!”

Gebler said it was no secret why the Vikings held off Grinnell: “It was the lay-ups for sure, they added up, and we kept taking advantage of that.”

Holinbeck agreed, saying: “The lay-ups were key, and we found the openings that were there.”

Cooper, however, was not taking any credit for himself. “I credit the guards, they moved the ball and found the holes, the team as a whole played great, and the bench was especially key in cheering us on,” he said.

Both teams started slow, but the game became very physical, which did not help the Vikings. Lawrence did not shoot well in the first half—only 33 percent from the field. On the other hand, Monmouth shot 52 percent. Lawrence struggled to a 30-29 halftime lead.

In the second half, LU played well, despite four fouls in the first ninety seconds. Their success was partly due to Brent Vandermause, who was all over the court, and helped Lawrence to a 48-43 lead with 7:43 remaining in the game. The lack of energy for the Vikings was still a problem. Monmouth began to dominate, and after Monmouth senior guard Steve Glasgow hit a three pointer with 28.2 seconds remaining, Monmouth took a 57-56 lead. This was their first lead since early in the first half.

The Vikings had a chance to win, but Monmouth’s senior post player Mike Roehm swatted away a Viking shot with two seconds remaining, Monmouth hung on for a 60-56 victory.

Glasgow, who is the son of Monmouth coach Terry Glasgow, led the way for the Scots with nineteen points. Holinbeck added thirteen for LU, and Vandermause ended with twelve.

“We just have to be fundamentally sound at the end of close games to win them,” said Vandermause.

The Vikings play their next game Saturday afternoon at Beloit. Their final home game of the year will be Feb. 13 against Carroll at Alexander Gym. 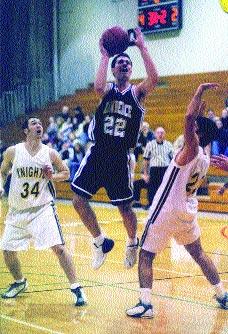