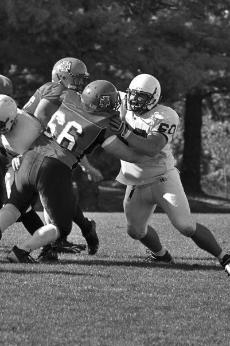 The Lawrence University Vikings continued their string of bad results last weekend, losing 42-0 at home to the Grinnell Pioneers.
The game started out well for the Vikings, as Matt Hintz completed a 22-yard pass to Jon Bruehl for the first first down of the game. Late in the first quarter however, Lawrence was forced to punt, allowing Grinnell to pass the ball to complete the first touchdown late in the quarter.
As the second quarter began, it was clear that the Vikes’ offense would be struggling to break through the Pioneers’ defense.
The only first down the Vikes managed to obtain in the quarter was earned on a 4-yard run by Jeremiah Johnson, but the Pioneers defense squashed the Vikings’ attempts to get on the scoreboard.
By the end of the first half was over, Grinnell had scored a total of four times, bringing the score to 28 to nothing.
The second half kicked off with Lawrence forcing a Grinnell three-and-out and fighting their way onto Grinnell’s half of the field, but the Vikings’ drive fizzled out shortly thereafter.
Grinnell scored a touchdown in each of the final two quarters, bringing the score to 42-0. On the Vikings’ last drive of the game, Lawrence came close to getting on the board, pushing up the field with a four-first down drive, but a Sam Ausloos pass on third-and-goal to Nick Thackston was incomplete and a 25-yard field goal attempt by Cody Robel was blocked.
“It’s tough, but we want to play again. We have a lot to prove,” said freshmen defensive end Nick Randall.
The Vikings next host Illinois College Saturday at 1 p.m. 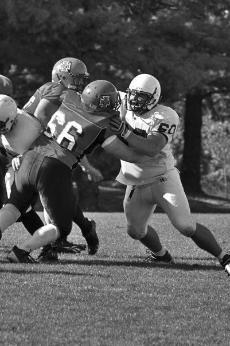