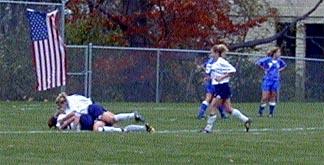 The Lawrence University women’s soccer team beat Aurora University in the first round of the NCAA Division III Women’s Soccer National Tournament this past Wednesday. The victory marks the first time in Viking history that the women’s soccer team has won an NCAA tournament game. Lawrence earned the right to advance to the NCAA Tournament by winning the 2001 MWC Tournament at Lake Forest this past weekend. This is the second straight year Coach Moira Ruhly’s kickers have made it to the big dance.

The Vikings had previously defeated Aurora on Oct. 21 this season; 3-2 in overtime, with Megan Tiemann scoring two goals, including the game winner three minutes into overtime. Wednesday, Tiemann would once again play the starring role as the Vikings won 2-1.

The first half, however, was all Aurora. They dominated possession and out-shot the Vikings 10 to 1. All that stood between them and the opening goal was Lawrence keeper Katie Wilkin. Wilkin was in inspired form and time and again prevented Aurora from taking what would have been a much-deserved lead.

The half time whistle blew with the score still at 0-0.

Barely a minute into the second half, Tiemann shocked the visitors by opening the scoring. Tiemann took a short pass from Sara Compas and beat Aurora goalkeeper Michelle Lexow to give Lawrence a 1-0 lead. Aurora responded with a further flurry of shots, but found Wilkin just as unforgiving as she had been in the first half. It wasn’t until the sixty-eighth minute that Katie’s defense was finally broken by Tara Utrata, who hit the back of the net with a perfectly lofted shot over Wilkin’s head, and evened the score at 1-1.

With both teams creating fewer and fewer chances as the game wore on, overtime loomed large. Then, with just two minutes left on the clock, Tiemann stuck a dagger into the hearts of Aurora for the second time this season. Lawrence’s Alyssa Spyksma won the ball from two Aurora players and sent a pass to the far side of the field where Tiemann was waiting. Tiemann, a three-time first-team All-Midwest Conference selection, took a few dribbles and blasted the ball past Lexow for what would prove to be the game winner.

Aurora had one last chance, but Wilkin made a final great save on Kelly Jenkins’ shot to preserve the win.

This was a game Aurora should have won. They had eleven more shots on goal than Lawrence. Their keeper made just three saves as opposed to Katie Wilkin’s sixteen. In the end though, the only statistic that matters is the final score. Once again it was Lawrence, with Tiemann and Wilkin playing the heroes, who came out on top.

When asked about the winning goal, Tiemann said: “When the ball came to me, I knew I had to score. We didn’t want the game to go into overtime. The team was counting on me and I wasn’t going to let them down.” This is the first victory in NCAA tournament play for the Vikings. Lawrence advanced to the NCAA tournament for the first time last season after winning the Midwest Conference championship, but was defeated, 2-0, by Albion College in the opening round.

It is the change in attitude from last year that has been the major difference this year. “Last year we were happy just to have made NCAA. This year we knew we had the potential to win the first round and possibly even the second,” said Tiemann, adding, “Our practice sessions have been more positive and intensive this year. We have a great freshman class who have really pushed us seniors and made sure we are on top of our game all the time.”

Last weekend The Vikings successfully defended their MWC Championship. Lawrence played Grinnell in the semi-final on Friday, Oct. 26 in a rematch of last year’s conference final game. The Vikings cruised to a comfortable 2-0 win thanks to early goals from Sara Compass and Tiemann. Compass one timed a cross from Spyksma with only 5:20 played in the game. Tiemann then put Lawrence up 2-0 when she scored unassisted five minutes later. Wilkin preserved the lead for the rest of the game, making a total of ten saves in all.

The final against St. Norbert, however, was a different kind of game. Lawrence laid siege to the Norbert goal but were unable to get past keeper Pam Mathes. After a scoreless ninety minutes, the game went into over-time where the incomparable Tiemann once again scored the winning goal. She seized on a rebound to slot home in the hundred and fourth minute and gave Lawrence its second straight MWC crown. 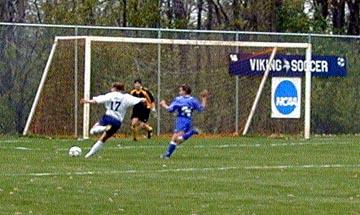 Senior Megan Tiemann (#17) kicks what would turn out to be the winning goal. (Cameron Ktamlich)