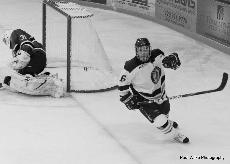 The Lawrence University hockey team has gotten this year’s season off on the right foot, opening with three wins in four games. In the process, head coach Mike Szkodzinski became the winningest coach in school history.
Szkodzinski, who is only in his fifth season as coach, passed Dave Ruhly on the all-time list last weekend against Concordia University Wisconsin with the 51st victory of his career.
The Vikings made his record-breaking win a memorable one, blowing out Concordia 5-1.
Lawrence used a huge third period to break open a 1-0 game. Three Vikings scored their first career goals in the third period, with sophomore Brandon Berquam and freshmen William Thoren and freshman Ben Friedman getting on the scoreboard for the first time.
Seniors Jacob Esch and Josh DeSmit contributed the other two goals for the Vikings, while senior Evan Johnson made 28 saves to record the win. Johnson had his shutout erased with a late goal by Concordia, but the Vikings’ win was never in jeopardy.
The Vikings once again came out firing on all cylinders on the offensive end in the second game of their doubleheader against Concordia, but the defense struggled and the Lawrence team found itself down 4-3 in the third period.
However, Lawrence scored twice in the third period to erase the deficit and earn a 5-4 victory. Johnson once again earned the win, the Lawrence-record 31st of his career. Johnson broke former Vikings goaltender Andrew Isaac’s record of 30 wins despite giving up four goals in the winning effort.
Lawrence (3-1-0, 2-0-0 MCHA) takes the ice again this weekend in a home-and-home series against conference foe Lake Forest. The series opens in Appleton Friday night, after which the Vikings will travel to Illinois for Saturday night’s game with the Foresters.