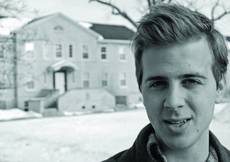 You have probably seen some of Stephen Anunson’s handiwork even if you have not been aware of it. Somewhere between this senior’s double major in anthropology and music with film studies as an interdisciplinary area, Anunson manages to fit in extracurricular activities.
He is the cofounder and president of the Lawrence University Film Production Club, and he has screened several of his own films at film festivals put on by the club. Anunson, along with fellow senior Carolyn Armstrong, founded a film production company, Bel Son Productions.
This December, Anunson and Armstrong traveled to Haiti to film a documentary. Anunson said the documentary is “about the power music has to make a difference in a developing country. We really focused on the impact music had on the kids, and the experience the volunteers had there.”
“We wanted to show that people can make a difference with more than just money by using their talents and their community to make an even bigger difference than they realize,” Anunson added.
Footage from the documentary was used in the Concert for Haiti in the chapel Wednesday night, and it will be screened again at the end of the year as part of Anunson’s honors project.
Anunson said he discovered his love for film during his sophomore year, when he realized that film was the perfect medium to combine all the things he loved: music, storytelling and photography.
So, without wasting any time, Anunson spent the following summer interning with Catherine Tatge, an Emmy-award-winning filmmaker and LU alum, in New York City. Anunson worked on several projects during his internship, and he must have done good work, because the next summer he was hired to be the location manager for Tatge’s PBS documentary on John Muir.
Until Anunson becomes our next Emmy-winning LU alum, you can catch his latest project Wednesday, Jan. 27, at eight in Harper Hall. He’ll be giving a lecture recital in collaboration with Alicia Bones on postmodern music and film. It promises to be one of the more unique recitals you’ll be able to catch on campus. Plus, then you can say you knew Stephen Anunson back before he was famous. 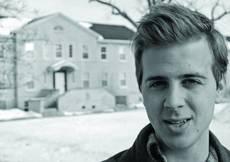