According to some Lawrence students, student vehicles parked off-campus have continually been the targets of vandalism. Since the Lawrence parking lottery allows only so many students to park their vehicles on-campus, others must find parking in Appleton’s downtown parking garages. These include the City of Appleton East Ramp, otherwise known as the old Younker’s lot next to the bus station. Lawrence has made this parking option available to students by charging $25 per term to park on certain levels of the ramp.Kyle Simpso, had his car broken into while it was parked in the city lot. When he moved his car to the lot at the beginning of third term , he left it for a week and returned to find that the driver side window had been smashed and his car torn apart. Simpson suspects that they were attempting to steal his CD player. But since he had hidden the face under the driver’s seat, they tore his car apart looking for it, but never found it and left empty-handed.

Simpson was forced to park in the city lot after losing his on-campus parking privileges due to several parking tickets he received over the course of the year. The student handbook states under 24-Hour Student Parking, Motor Vehicle Regulations, Parking Violations, policy .01,”Three or more violations (tickets) in any given term will disqualify a student from entering the parking lottery for the remainder of that academic year.”

While this policy is clearly stated in the handbook, Simpson complains that it was not clearly or consistently enforced. Simpson, who received three parking violations from Lawrence Security during first term, was still allowed to participate in the parking lottery for second term. It was not until third term that he was notified of his ineligibility to park on-campus.

Policy .05 states “The appointed student member of the University Parking Committee will be responsible for submitting a list of ineligible students to the dean of students on the morning of the parking lottery. This list will be current to that day.”

Simpson received his notice of ineligibility the day of the parking lottery, after having filed out and submitted the paperwork. Having heard nothing before that day and assuming that the policies would not be enforced, as they hadn’t been second term, Simpson was frustrated upon finding out at the last minute that he would have to change his parking arrangements the last term of his senior year. “There were many other people affected by this as well,” pointed out Simpson.

“Because my car had been vandalized [in the city lot], I don’t feel like I can park there anymore. As a result, I get ticketed by Lawrence Security and the cops ad nauseam,” commented Simpson, who is seeking other parking options. He feels as though he is being forced to park in a lot that is unsafe for his vehicle and that charges $25 per term. “Basically Lawrence really screwed me over on that deal,” said Simpson, “My life has become a living hell with parking.”

Other Lawrence students have experienced similar events as a result of their cars being parked in the city lot.

Quinn Lake returned to her car to find that her CD player and CD collection had been stolen. “The person who stole them must have crawled through the trunk of my car because all the doors were locked,” Lake hypothesized. On a separate occasion, she found footprints over the hood, roof, and windshield and the roof had been dented in. “[The damage] kind of annoyed me.”

Gina Wagner claims that this kind of vandalism in the city lot has been happening for years. Two years ago, her car was vandalized on two separate occasions, her passenger side lock smashed in, and her CDs and CD player stolen. The students interviewed also said they knew of other students whose cars have been damaged in similar ways.

When asked if he felt safer parking on-campus, Simpson responded, “Much safer. Nothing has ever happened to [my car] parked on campus.”

As is often the case in occurences of vandalism, little can be done after the fact. Simpson’s case is typical of vandalism cases. He did report the vandalism to police who, according to Simpson, told him, “Here’s an incident number. You can tell your insurance [agent].”

In Lake’s case, she did not report the incident and did not recover her cds or player. 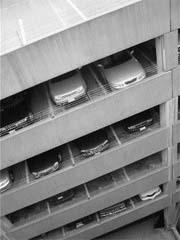