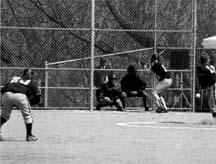 St. Norbert pitcher Gina Collar shut down the Vikings and their bid for their first Midwest Conference Softball Championship since 1999.
Andy York

St. Norbert pitcher Gina Collar shut down the Vikings and their bid for their first Midwest Conference Softball Championship since 1999. (James Estes)

The Viking Softball team had high hopes coming into the weekend. They were the Northern Division Champions. They were hosting the conference tournament at home. However, the Vikings had a bad day in practice before the tournament started, and it all went downhill from there as LU lost their first two games in the double elimination tournament to Lake Forest 13-7, and then to St. Norbert 17-0.

The Vikings were playing down from the start of the tournament. The day before the tournament started, the Vikings’ all-region shortstop and all-American candidate Jenny Burris dislocated her shoulder in practice in a collision with center fielder Becca Reason.

Burris was unable to play in the tournament, and her loss showed in the Vikings’ play.

In the first game of the tournament, the Vikings faced off against Lake Forest, the team that took second place in the country last season.

The Vikings played well early, taking a 4-3 lead after the fourth inning. Then things went downhill.

Vikings pitcher Lauren Kost was pulled after a leadoff home run in the top of the fifth. Amy Varda came in to pitch for the Vikings. Varda gave up nine runs in three innings, but only two of the runs were earned; the Vikings committed two errors, which led to Forester runs.

By the time the game was over, Lake Forest had escaped with a 13-7 win and was off to the winners’ bracket, while the Vikings went to the losers’ bracket to play St. Norbert.

Shannon Arndt, who had two RBIs, and Ashley Eaton, who went 2-3 with two runs scored, led the Vikings on offense.

The second game was a complete disaster for the Vikings. The teams both went scoreless for the first two innings. Then the Green Knights found their hitting stroke. The Vikings gave up four, five, and eight runs in the third, fourth, and fifth innings respectively.

The Vikings committed four errors, so only 11 of the 17 runs were earned.

The Vikings had no offense with Burris hurt, and only got four hits against St. Norbert pitcher Gina Collar.

The Vikings were eliminated and St. Norbert went on to advance to Saturday’s play.

The Championship game matched up MWC South foes Lake Forest and Monmouth. The first championship game was tied at two until Monmouth catcher Rachel Webster hit a three-run home run to give the Scots a 5-2 victory.

That set up the second and final game: the winner would move on the NCAA Tournament; the loser was done.

Monmouth jumped out to what looked like an insurmountable 5-0 lead on the Foresters. That lead was quickly narrowed in the third inning when Lake Forest DH Shannon Clerkin hit a grand slam to bring the lead to 5-4.

Monmouth struck back and increased their lead to 8-4, but a run in the bottom of the sixth inning trimmed that to 8-5.

The bottom of the seventh inning would be one of the biggest championship game comebacks in MWC history. After loading the bases and putting the winning run at the plate, Monmouth pitcher Heather Burrows walked in a run and was replaced by Shelly Orwig.

An RBI single cut the lead to 8-7, with the bases loaded and still no outs. Orwig struck out the next batter, and Lake Forest catcher Jen Thomason doubled to the gap in right center field, scoring two runs and winning the championship for Lake Forest 9-8.

The Foresters advance to the Midwest Regional of the NCAA Softball Tournament and will play host Wartburg, Ia. today.

The six-team double elimination tournament will last the weekend, with the winner advancing to the NCAA Softball World Series, where the Foresters took second a year ago.

The Vikings will graduate several key seniors this year. Varda, Sarah Sager, and Stephanie Swoboda will all graduate for LU. Coach Kim Tatro will have to find some new players, but look for the Vikings to be near the top of the MWC again next spring.