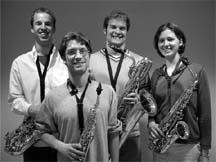 Bryan Wente, Casey Schmidt, Ryan Alban, and Rasa Zeltina (pictured here left to right) competed in one final round at the Coleman Chamber Ensemble Competition in California. Later this month, they will be competing in the prestigious Fischoff competition at Notre Dame.
Nick Siegel

Bryan Wente, Casey Schmidt, Ryan Alban, and Rasa Zeltina (pictured here left to right) competed in one final round at the Coleman Chamber Ensemble Competition in California. Later this month, they will be competing in the prestigious Fischoff competition at Notre Dame. (Julien Poncet)

The Lawrence University Saxophone Quartet participated in the final round of the 57th annual Coleman Chamber Ensemble Competition on April 26, at the California Institute of Technology. The competition marked the first for this year’s quartet, which consists of Casey Schmidt on soprano saxophone, Rasa Zeltina on alto, Bryan Wente on tenor, and Ryan Alban on baritone. The group first participated in the competition in February after submitting a tape, along with many other schools nationwide, to a panel of adjudicators from the Coleman Chamber Music Association.

After intense scrutiny of all the groups’ recordings, the judges selected 16 chamber ensembles to participate in the final round. The finalists consisted not only of saxophone quartets but also various other chamber settings such as brass and woodwind quintets and other mixed chamber ensembles. Finalists came to Pasadena from many notable schools nationwide such as both the Eastman and Manhattan Schools of Music and The New England Conservatory.

The Coleman Chamber Music Association, founded in 1904, strives through its annual competition to “implement a plan for the purpose of stimulating, through public competition, small ensemble chamber music performance by young people.” It is also widely believed that the competition, which began in 1947, is the first of its kind in the United States. Winners from past years include world-famous ensembles such as the Tokyo Quartet, the Atlantic Brass Quintet, and Eighth Blackbird.

The quartet has worked diligently under the instruction of professor Steven Jordheim to qualify for the Coleman Competition. The quartet formed at the beginning of the current academic school year and since then it has rehearsed almost daily.

At the competition they performed Ticheli’s Back Burner and River’s Grave et Presto in their entirety and also performed portions from Torke’s July and Piazzolla’s Four, for Tango.

The quartet is currently looking forward to their participation in the Fischoff Competition at Notre Dame on May 10-11. In South Bend, the quartet will add Phil Wood’s Three Improvisations to their ongoing list of repertoire.

In addition to working to prepare many saxophone quartet pieces, Casey Schmidt adds, “It’s my favorite ensemble to play in. Preparing for the competitions requires an intense rehearsal schedule, which I hope will make us all better musicians.”

In addition to playing competitions, the group maintains a respected reputation on and off campus and is continually sought after to play various concerts and events.