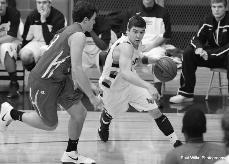 The Lawrence men’s basketball team split a couple of close conference games this weekend, defeating the Knox Prairie Fire 89-86 in double overtime Friday night, then losing to Grinnell College 112-103 in overtime Saturday.
Knox College (1-14, 0-10 MWC) looked to improve their conference record as they played the Vikings to an even 26-26 first half.
In the second half, Knox College led by as many as nine points prior to a 15-2 Vikings run which gave the Vikings a 61-57 lead with 5:48 left to play. The final 4:48 saw six lead changes as the teams continued to play each other even.
At the end of regulation time it was tied 74-74 after Knox guard Tanner Carlson hit a three-pointer to keep his side in the game.
The first period of overtime passed as neither team could gain an upper hand, but it wasn’t until the second period that the Vikings asserted their dominance over their opponents.
The game was tied 86-86 in the second overtime period when senior forward Erik Borresen converted a powerful move to the basket and was fouled for a three-point play. This basket proved to be pivotal as Knox was unable to penetrate the Viking defense in the final 1:31, resulting in an 89-86 Viking victory.
Over the course of the game Tyler Crisman, proved to be a constant threat from beyond the three-point line, hitting seven three-pointers, which led him on his way to both a career- and game-high 25 points.
On Saturday, just one day removed from the hard-fought battle with Knox, the Vikings had to face off against the Grinnell Pioneers (9-6, 4-6 MWC).
Lawrence started the game with some hot shooting, hitting 71 percent of their shots from the field and leading the Pioneers 60-35 at the end of the first half.
The Vikings cooled down in the second half, though, as the Pioneers went on a 25-7 run with 10:47 left, which resulted in a tie game with 3:43 remaining.
After some back-and-forth play, Grinnell established a 97-96 lead before Conor Klusendorf made one of two free throws with 11 seconds left to force the game into overtime.
Grinnell came out hot in overtime, hitting their first three shots of the extra period, and eventually, the Pioneer onslaught would be too much for the Vikings to handle. The game finished with a score of 112-103, and the Vikings were obviously disappointed they had let a 25-point halftime lead get away.
Klusendorf did his best to try to spark the Vikings to victory, as he finished on a number of spectacular dunks on his way to a career-high 35 points, but unfortunately it wasn’t enough for a Viking victory. Borresen also contributed with 25 points, 18 rebounds and eight assists, coming close to recording what would have been the first triple-double of his career.
After a big game against St. Norbert College (13-3, 9-2 MWC) Wednesday night, the Vikings will next host Carroll Saturday afternoon.