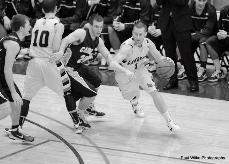 The past week has been a roller coaster ride for the Lawrence Vikings’ men’s hoops fans, as the Vikings ran out to a big win over Carroll University 85-65 last Saturday, but lost a close matchup 84-80 in Tuesday night’s contest against Ripon College.
Saturday afternoon, the Vikings began slowly against the Carroll Pioneers (9-7, 7-4 MWC), and it wasn’t until 9:21 remained in the first half that the Vikings took their first lead of the game. Once the Vikings grabbed the lead, they never looked back, and the Pioneers were left chasing them for the remainder of the contest.
At the end of the first half Conor Klusendorf had an impressive dunk to lift the Vikings’ spirits as they went into the locker room at halftime up 40-31.
Lawrence seemed as if it had no intention of slowing down in the second half of the game, as its stellar performance continued.
With eight minutes remaining, the Pioneers had worked hard to cut the deficit down to 10 points, but then a pair of three-pointers by Chris Siebert and Jon Mays brought the lead back to a safe margin of 16.
Down the stretch, the Vikings led by as many as 24 points, thanks to a extraordinary effort by Mays, contributing a career-high 38 points and eight rebounds over the course of the game. Junior guard Tyler Crisman added 13 points, while senior center Erik Borresen grabbed 12 rebounds to aid in the victory.
Tuesday night’s contest against the Ripon Red Hawks (11-7, 9-4 MWC) saw the Vikings work hard to rally back from a huge second-half deficit. Down by 18 with 15:28 left to play, Lawrence went on a 17-2 sparked by a couple of big three-pointers by Crisman and some stifling team defense.
After some back-and-forth play, the Vikings and Red Hawks found themselves in a 75-75 tie with 2:39 left to play.
With 1:38 remaining, Borresen hit a jumper to give the Vikings their first lead of the half. However, the lead was short lived, as Ripon’s Talyor Koth was fouled on the next possession and tied the game from the free-throw line with 1:19 remaining.
After a stout defensive possession by the Ripon Red Hawks, Koth converted a three-point play against the Vikings, which led to a three-point deficit for Coach Joel DaPagter’s team with very little time remaining.
Crisman attempted an off-balance three-pointer in an attempt to retie the game in its closing seconds, but unfortunately for the Vikings, it didn’t fall, and despite Mays’s late three-pointer, the visitors lost 84-80 as Ripon continued their excellent at the charity stripe.
Despite the miss, Crisman finished with a career-high 29 points, while Mays added 23 points and Borresen provided another double-double night with 15 points and 15 rebounds.
The Vikings will return to action when they go on a two-game road trip this weekend against Lake Forest (8-9, 6-6 MWC) and Illinois College (11-6, 7-5 MWC).

Jared Padway (Paul Wilke) The past week has been a roller coaster ride for the Lawrence Vikings’ men’s hoops fans, as the Vikings ran out to a big win over Carroll University 85-65 last Saturday, but lost a close matchup 84-80 in Tuesday night’s contest against Ripon College.Saturday afternoon, the Vikings began slowly against the…