Men at Lawrence take a stand against sexual violence 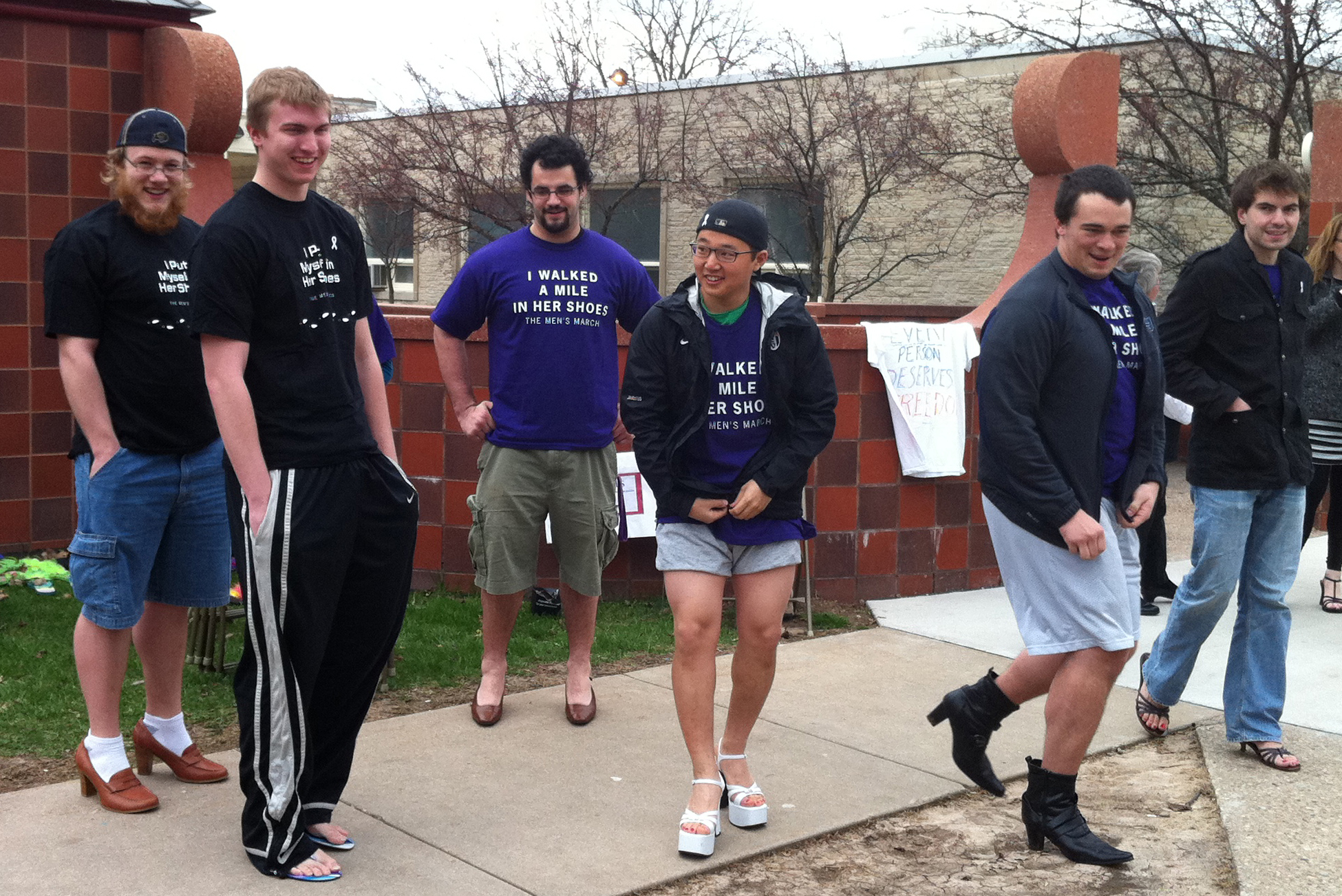 Saturday, April 30, Lawrence’s Sexual Harassment and Assault Resource Board and the Sexual Assault Crisis Center-Fox Cities joined forces to hold an event called Walk a Mile in Her Shoes.

Men from the Lawrence and Fox Cities communities, accompanied by women and some children, donned women’s high-heeled shoes and walked together in order to take a symbolic stand against sexual violence.

Walk a Mile in Her Shoes: The International Men’s March to Stop Rape, Sexual Assault and Gender Violence is currently in its 10th year of existence. In 2001, Frank Baird introduced the idea for Walk a Mile in Her Shoes to the Valley Trauma Counseling Center at The California State University. Since then, marches have been held in hundreds of cities all over the world.

The organization’s website lists its mission: “Co-creating a United Gender Movement, men will be a part of the solution to ending sexualized violence.”

Events like Walk a Mile in Her Shoes aim to help raise awareness of these statistics and allow men to take a positive stance against sexual violence.

Sexual violence is a real concern even on the Lawrence campus. According to Bowles, “this event looks at an issue that’s incredibly relevant to college students. The sexual assault statistics, especially for first-term freshmen, are staggering.”

In Lawrence’s most recent Campus Security Report, released in October 2010, the number of reported sexual offenses on campus had increased from one incident in 2008 to four in 2009.

Bowles added, “Any event that makes people think about the fact that sexual assault happens anywhere, any time is incredibly important — and holding it on campus should remind students that date rape and other offenses happen close to home. A huge percentage of campus assaults occur in the victim’s dorm.”

The event entailed more than just the high-heeled walk. Calumet County District Attorney Jerilyn Dietz, a survivor of sexual assault herself, gave a keynote address, and Lawrence’s Assistant Director of Admissions and Appleton Alderman Teege Mettille served as the master of ceremonies.

Participants were also invited to take part in kid-friendly activities such as cookie decorating, gender-blind nail polishing, face painting, and T-shirt decorating. Awards were presented to Lawrence’s Assistant Director of Counseling Services Paul Valencic for raising the most money for the event and the Delta Tau Delta fraternity for the largest group participation. Delta Tau Delta also received the traveling “Leg Lamp trophy” for the next year.

In total, the event raised more than $600 for the Sexual Assault Crisis Center.

Valencic was one of the event’s primary organizers. He commented, “It was rather cold out and the high heels hurt, but enduring the discomfort is only one small thing men can do to show their support for women.”

Valencic continued, “The individuals present made a strong statement through their actions and donations about the importance of keeping the issue of men’s sexualized violence against women in the spotlight.”

Though sexual assault is a serious problem, the event served as a reminder that there are compassionate individuals and useful resources available to students who need them.

Bowles remarked, “I think bringing our staff to the campus for this awareness-raising should help students know that we’re available to them, as are on-campus resources like SHARB and counseling services.”