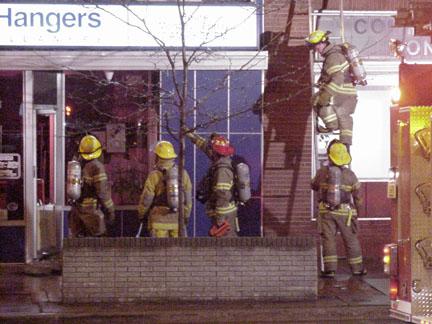 Firefighters attend to the sign that caused the small electrical fire at Hanger’s Cleaners on Wednesday night. (Ryan Marx)

At approximately 10:30 p.m. this past Wednesday night, an electrical fire broke out in a sign above Hanger’s Cleaners, located at 311 E. College Avenue, next to Taste of Thai and the Lawrentian offices. The fire was put out shortly thereafter by the Appleton Fire Department. According to Lieutenant Woodzicka of the Appleton Police Department, the fire started as a result of electric problems in the sign. The sign was installed less than two months ago.

Hanger’s Cleaners, until recently known as Clark’s Cleaners, has been owned by Dorothy Clark since 1946. Clark, who is 92 years old, was in her apartment above the cleaners when she noticed smoke coming in from an open window facing out onto College Avenue, but did not see any flames. She went to the window to close it. Below, she saw a passerby who asked her what was happening. Uncertain, she asked him to call the fire department, and minutes later they arrived. Clark, meanwhile, called her son who came and brought her outside.

Upon seeing the smoke, Clark said “I was getting the shakes,” but after the incident commented, “I’m okay.”

When the APD arrived, they were at first uncertain as to the cause of the fire, and broke through the door of the cleaners to make sure the fire had not started there. Inside they found no damage and concluded that the smoke must have originated from the sign above. Six fire fighters with two ladders and several axes removed the forward panel and the lights within and cut into the metal behind the lights to make sure it was completely out.

The fire fighters spent about an hour dealing with the fire, which caused only minimal damages and a small case of the shakes.