Everything is going Oklahoma!’s way 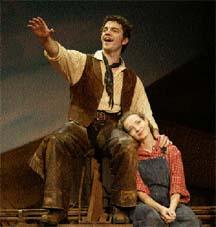 Rodgers & Hammerstein’s 1934 landmark musical Oklahoma! played at the PAC from Jan. 13 – 18. Presented by NETworks, this touring show is directed by Fred Hanson and choreographed by Ginger Thatcher. Being Rodgers & Hammerstein’s first and in many ways most innovative collaboration, this musical has set the standard for modern musical theatre. Set in the territory of Oklahoma to the backdrop of the rivalry between farmers and cattlemen, the story follows the playful love between Laurie and Curly, the two-timing and comical adventures of Ado Annie, and the attempts at peace within a community of individuals living without state governance. Packed with cheesy love songs, hokey line dancing, and good ol’ back country American culture, this musical, once you swallow your pride, is fun for everyone and will send you home singing.

The actors demonstrated a consistent and fine level of singing, acting, and dancing. Curly, played by Brandon Andrus, stood out with his charming portrayal of the young cowboy as well as his wonderfully comfortable singing voice. Laurie, played by Amanda Rose, was upstaged by her talented leading man and while fulfilling her role, she failed to really make an impression. Ado Annie (Sarah Shahinian) was successfully humorous within the love triangle between her childish boyfriend Will Parker (Daniel Robinson) and her exotic lover, Ali Hakim (Colin Trahan). Bruce Warren, who stepped in as an understudy to the role, portrayed a frightening and effective Jud Fry and filled the hall with his powerful baritone voice. The cast was supported by a strong and fun chorus of dancing, singing, fighting, and flirting country folk. The performance was complete with beautiful sets, full costume, and entertaining dance interludes.

This recently conceived tour is adapted from the Cameron Mackintosh presentation of the Royal National Theatre production seen on Broadway during the 2002-2003 season. The original set, costumes, and lighting designs have been recreated for the tour.