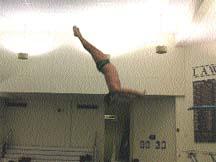 Tom Towle broke a school record and qualified for Nationals in his last meet. This weekend, he goes for his first MWC title.
Tariq Engineer

Tom Towle broke a school record and qualified for Nationals in his last meet. This weekend, he goes for his first MWC title. (Andy York)

Two weekends ago Lawrence University hosted the Wisconsin Private College Championships. The event is Lawrence’s second biggest of the swimming season, after the Conference Championships. Six colleges including Lawrence compete for all-state honors. This year Carthage College won both the men’s and women’s titles, with Lawrence taking second in both competitions. Lawrence, however, did win both diving competitions.

Nick Heuer earned his all-state honors by pulling off the double in the 100- and 200-yard breaststroke.

In winning the diving event LU diver Tom Towle qualified for the national meet. He broke the school’s record in the three meter, and will be competing at the NCAA Division III Swimming and Diving Championships from March 20-22 at Emory University in Atlanta.

The women’s competition wasn’t as closely contested as the men’s. Lawrence finished with a total of 155 points to Carthage’s 200. The women who earned all-state honors were Stephanie Novakov, Tiffany Pannier, Michele Uthmeier, Alison Van Dyken, and Angie Utschig.

Stephanie Novakov was the real surprise in winning the 1650 free. So far this season Novakov has been concentrating on the 500 free. The last time she swam the 1650 in competition was four or five years ago.

This weekend the swimming and diving teams will be competing at the Midwest College Championships at Grinnell College. Last year the Viking men and women both took second place behind this year’s host. The MWC Championships were held at Lawrence last year.

This season, Viking coach Kurt Kirner thinks the teams should be just as competitive. “Realistically, I see the men finishing in second and the women in third,” he predicts. “You can usually tell ahead of time from the qualifying times.”

Individually, the Vikings will put forth a strong effort. Both Tom Carroll and Nick Heuer return to defend their championships from last year, and both the men and women return many other top finishers from a year ago.

“I see Tom Carroll easily defending his title, and Nick Heuer should have an easy time as well,” says Kirner. “On the women’s side I think Stephanie Novakov has a good chance to win. In diving, Tom Towle will have a chance; the person who beat him last year [Eric Blevins of Grinnell] is back, so it will be harder for him, but he can do it.”

Kirner doesn’t think that the long road trip to Grinnell will affect them either. “We go down the day before, and we will have plenty of time to adjust,” he says. “We will have a team meal and a team meeting before having a warm-up session Thursday night, so when competition comes on Friday we will be ready.”

The MWC Championships will take place Friday through Sunday at Grinnell. Look for results from the meet in next week’s Lawrentian.