Vikings win and tie to get out of Cellar 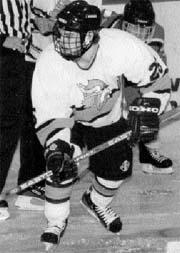 The Vikings got back into the swing of things with a win and a tie over Northland in Ashland. The Vikings will host UM-Crookston this Friday and Saturday.
Andy York

The Vikings got back into the swing of things with a win and a tie over Northland in Ashland. The Vikings will host UM-Crookston this Friday and Saturday.

The LU hockey team posted a huge win and tie against Northland College this past weekend to get them out of the Cellar in the MCHA. The Vikings’ three points on the weekend put them in fourth place, with a huge home series against third place UM-Crookston this weekend.Friday night the Vikings traded goals before exploding in the third period. With the score tied at 2 after LU goals by Pete Mossberg and Evan Thornton, the Vikings had two goals within five minutes to give them a 4-2 lead. Aaron Graber and David Olynyk scored those goals. Northland would score one more time to make it interesting, but Joe Searl would add an empty-netter for the Vikings to give them a 5-3 win. LU goalie Andrew Issac would make 41 saves, and would be named the MCHA defensive player of the week for his performance.

Issac was in goal again Saturday night as LU went for the sweep. They didn’t get that, but they still picked up a point from the Lumberjacks. The scoring was like the first game, and after the first period, the game was tied at 2. Scoring for LU were Mike Burkhart and Mossberg again. The teams traded a goal a piece in the second to tie the game at three. Burkhart has his second of the game for the Vikings. In the third period, it would be more of the same, each team getting two goals. LU got a shorthanded goal from mason Oakes to take a 4-3 lead, but Northland struck back 41 seconds later to tie it. Then with three and a half minutes left, Brad Barton scored what looked like the game winner for LU, but in the last minute Northland pulled its goalie again and scored this time with thirty-four seconds left to tie the game at 5. Issac had another great game with 31 saves for LU. The Vikings are in action this weekend at home against UM-Crookston at the Appleton Family Ice Center. Face-off is 7:45 both nights.